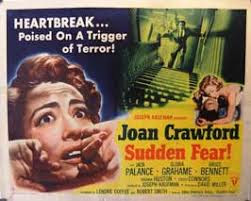 Director: David Miller, Stars: Joan Crawford, Jack Palance, Mike Connors, and Gloria Grahame. A very, very dark and claustrophobic noir, with good performances all around, especially by the more creepy than usual Palance, it has to be the lighting that is enhancing his train wreck of a face.

ts a veritable juxtaposition of grotesques the ghoulish Palance with the buffoonish Crawford. Crawford no matter how you slice it looks downright clownish (wearing a nightgown inspired by Uncle Feater) chewing the scenery with almost ape like hysterics that makes you feel like throwing her a banana. It's hard to root for a leading lady that looks like this: 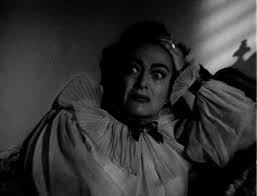 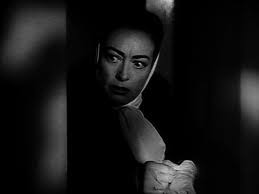 Palance in one of his better closeups 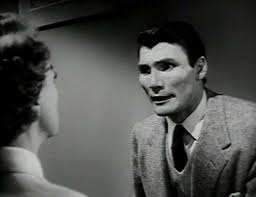 I can only imagine what Joan's eye bulging school of acting must have looked like on a full 60' screen. 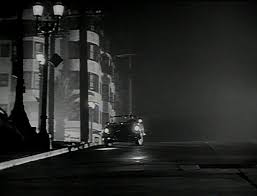 From IMDb Storyline, Actor Lester Blaine (Palance) has all but landed the lead in Myra Hudson's (Crawford) new play when Myra vetoes him because, to her, he doesn't look like a "romantic leading man." On a train from New York to San Francisco, Blaine sets out to prove Myra wrong...by romancing her. Is he sincere, or does he have a dark ulterior motive? The answer brings on a game of cat and mouse; but who's the cat and who's the mouse?

by robert-temple-1 (United Kingdom)
This is a real edge-of-your-seat nail-biter. David Miller did a terrific job of directing this one, and the cinematography is spectacular by Charles Lang. Some of the shots are as inspired as anything ever seen in Hollywood, such as one in Joan Crawford's library where upon hearing an inadvertent recording made on her dictaphone, she gradually shrinks back in horror against the far wall, until she becomes nearly a dot in the distance. That shot is a real triumph of cinematic inspiration. Much is accomplished with a clock and its pendulum, with the star-shaped pendulum at one point shown in shadow swinging across her chest as she gets more and more anxious. None of this is overdone, but is all subtle and effective. Joan Crawford has us all spellbound with her magnificent performance. She throws vanity to the winds, and is not afraid to show her character as someone in the round, complete with cowardice, foolishness, and even extreme stupidity, combined with cunning, intelligence, charm and inspiration. Rarely has a woman been shown so soaked in sweat with sheer terror, and she must have stepped straight out of the shower for each of those shots. When we aren't staring at her incredulous, we notice that Jack Palance is highly effective, and then we have the delectable treat of Gloria Grahame turning up. Which true cineaste does not adore Gloria Grahame? She herself probably never knew what all the fuss was about, regarding herself no doubt as an ordinary girl. But Gloria Grahame was far from ordinary. She had that indefinable something plus a lot of other somethings, which for reasons which are deeply mysterious and impossible to explain leave many people like myself in a state of entranced wonder. What was it about her? No matter how many times we watch her we will never know, all we can say is there will never be another one. This film is a real humdinger.

All in all it has great atmospherics, the Kino DVD is bare bones, too bad, I have a feeling that a running commentary would have been hilarious. I'll subtract 2 points for the post plucked eye browed Crawford, final tally 7/10
Posted by cigar joe at 2:38 AM