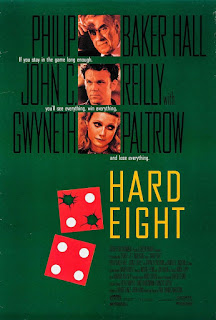 John (Reilly). Dumbass. Loser. Down and out. Transient at Jack's. Went from Los Angeles to Vegas to, get this, try and win the six grand he needs to bury his mother. Sydney "finds" John and offers him a cigarette and a cup of joe. Sydney we find out later has an Atlantic City connection to John. At the booth Sydney offers to give John fifty bucks. He asks John what he'd do with the fifty, Johns says he'll eat. Sydney  answers and then what? Sydney tells him that with the fifty dollars I'll take you to Vegas and show you how to survive. John wonders what's the catch, but he agrees to let Sydney show him and they drive back to Vegas.

Two years later. Christmas time. John and Sydney have been up in Reno now a couple of low rollers working the casino circuits. John is getting by on his own thanks to Sydney. John has also fallen in love with a cocktail waitress/B-girl/amateur hooker named Clementine (Paltrow). John also has made a new friend name of Jimmy (Jackson), he is a hard drinking, suave, cocky, casino security man who moonlights as  "player."

Sydney wants the best for John, treats him like a son. Sydney becomes interested in Clementine when he sees that John is head over heels for her. Questioning Clementine, Sydney finds out that she is also expected to be friendly to the customers.

Sydney: [at the cocktail lounge] Tell me something. Are you required to flirt, to behave as you do toward that table of men over there? Maybe... it's some part of your job?
Clementine: Uh, they don't say to do it.
Sydney: But if you don't?
Clementine: Well, then I get questioned, like: "Why were so rude to them?", and, I mean, I can't talk back. I can't tell them to fuck off and leave me alone.
Sydney: As a rule?
Clementine: I'd also lose the tip.

Tailing her after work he finds out that she's hooking on the side. That night, Sydney confronts Clementine and takes her up to his room. Clementine suspects that he wants to play hide the sausage, but he only wants to set her up with John.

The next day Sydney sends Clementine and John out to the mall to buy her some clothes.

That night, Sydney receives a frantic call from John. John asks Sydney for help, and John won't tell him why, he just asks him to come to a motel room. Sydney gets to the room. WTF. He finds out that John and Clementine are not the sharpest tools in the shed. They have  taken a trick of Clementine's hostage. He fucked Clementine and didn't pay her. They've knocked him out and are holding him for ransom. They called his wife and demanded $300.

Sydney: You know the first thing they should've taught you at hooker school? You get the money up front!

Sydney, can't believe it. Then to top it all off John tells Sydney that he married Clementine. When Sydney asks who knows that they are there, John finally tells him that Jimmy brought him the gun. Sydney takes charge tells John and Clementine to get out of town, go on a honeymoon. The head out to Niagara Falls.

Everything goes Noirsville when Jimmy blackmails Sydney with the knowledge that Sydney shot John's father in the face back in Jersey.

Jimmy: What I mean - what I believe... is that you killed his father... like the stories I heard go. Now, if somebody killed my father... I would feel the need to do something. The stories I heard - you know, stories get around - is that you used to be a hard-ass. You were a hard-ass and you took his dad out, Sydney. So you think - what? You can just walk through this life... without being punished for it? Shit, man. I know all those guys you know. Floyd Gondolli, Jimmy Gator, Mumbles O'Malley. They like to sit around in Clifton's and talk, talk, talk. They love to tell stories. You can sit there and look at me sideways all you want. You probably think I'm some kind of asshole or something... but I'm not a killer... like you. You walk around like you're Mr. Cool, Mr. Wisdom... but you're not. You're just some old hood. The other night in the bar, you asking me a question... like do I do parking lot security? Well, the answer is no! I'm trusted security inside the casino. I'm trusted with security, and I don't fuck it up.
Sydney: Good that you have such a sturdy sense of responsibility.
Jimmy: Don't! Don't! Don't fuckin' do that! You understand? I can see right through that shit! You look at me as some idiot, huh? I know you do. I know you. You old guys, you old hoods... you think you're so fuckin' above it... so high and mighty. What am I to you? Some loser? Not with a gun in my hand. Not with the facts I know. Bottom line, Sydney. No matter how hard you try... you're not his father.

Jimmy's is also, for all his coolness and hip threads, another dumb ass, and yes also another loser.  In his above monolog we can highlight the section of it that will be his famous last words, that being, "but I'm not a killer... like you." Bingo!

All the principals are superb. Hall portrays the tough love pseudo father figure in a solemn, standoffish way, you know he doesn't suffer fools normally but his humanity is leaking out of his exterior shell and he does his best for the two dimwits he has chosen to help. Riley is the loveable idiot, taking every wrong direction when he has a choice. His soul mate Paltrow plays the equally dense, a marriage made in a mental hospital. Soon after the ceremony John turns around and Clementine is gone off with a trick. Jackson as the not quite smart enough Mr. Cool, shows his chops here. There is an excellent transition of a tune that is originally called Sydney's Theme. It happens when Sydney is waiting on the return of Jimmy.

Jimmy is high rolling it at the crap table. He bets a hard eight and makes it. Mr Cool now gets a hooker in tow and brings her back to the apartment. Opening the door they grope in the dark. Jimmy begins to ask the woman to "see your pussy." She lays back on the couch spreading her legs wide while Jimmy flips the switch on the light. She is showing Jimmy everything she's got. And at that moment Sydney's Theme transitions into what I call the White Pussy Blues for Jimmy.

It's a Reno of noisy ding, ding, ding, casino hotels with bad lounge acts, dive motels, and small dumpy vinyl greasy spoons, all with the barest hints of Christmas, i.e., faint elevator music like yuletide carol's on autopilot, or a pathetically stingy string of lights on a front porch. Bravo 9/10.