Noirsville Gif of the Week 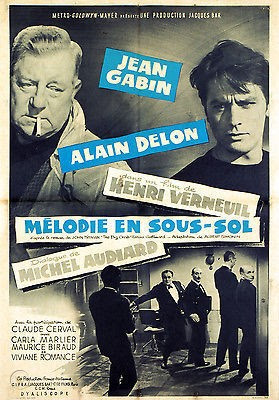 "The most American of French directors"

Written by Albert Simonin and Michel Audiard and based on the Zekial Marko (as John Trinian) novel. Cinematography by Louis Page and the Music, a great jazzy soundtrack, by Michel Magne.

Charles released from prison after a five year stretch. He's dropped of at La Gare Du Nord and hops a commuter train at to get back home. A fifty minute ride to Val d'Oise, France. He' in a coach car. A group of commuters are bullshiting beind him. He listens in on a conversations about vacations. Fishing in Brittany, trailer camping on le côte d'azur, time payments for two weeks in Greece. They don't appeal to Charles.

He gets off the train at Val d'Oise and he doesnt recognise the place. Just like Manhattan's Lower East Side and Upper Third Ave after the el was torn down, and Los Angeles' Bunker Hill Charles' neighborhood has been "urban renewed" All the familiar landmarks are gone.

A nice Jazz sore kicks in and we get our opening credits interspersed with short humorous vignettes of Charles trying to figure out just where the fuck he's at.

He finally finds is house a quaint relic among the looming housing projects. In the house is his wife Ginette. She is happy to see him, but didn't expect him so early. She wants him, after five years in the can, to settle down and get a job in his old trade as a bartender. That was great when he was nineteen years old but now Charles has other ideas. He wants to pull one last job and head out to Australia.

After a night getting reacquainted with Ginette, Charles, goes to a health spa run by his old crony Mario. Mario gives Charles all the blueprints he's worked on of their next job.

Mario tells Charles that he's out of the racketts on doctors orders. Another job would kill him. After finding out that Mario is incapacitated from ailments, Charles recruits two assistants to carry out the job. The first is his recent young punk cellmate Francis Verlot, the second is Louis Naudin, Francis' brother-in-law who is a first rate mechanic. Francis will do the heavy lifting end of the job while Louis will be a driver.

Charles plan is simple. Francis will assume the fake identity of a big time playboy/gambler. He's going to drive up in a sports car and check into a residence hotel across from the Palm Beach Casino in Cannes.

He will also rent a swimming pool changing cabaña at the casino for the rest of the season. At the pool he will mingle and get to know the girls of the Casino's floorshow. His goal is to get familiar enough to the staff and crew so that he has easy access to the stage and catwalks.

Charles will also assume a new identity. He will drive up in a Rolls Royce with Louis as his chauffeur at a hotel at the other end of the beach. He will book a suite of rooms, and use this as a base.

Francis' easy access to the backstage after carrying out a week long fling with a dancer named Brigitte, allows him to climb a ladder to the roof. From the roof of the stage he can cross to the roof the casino, enter the ductwork there, and gain entry to the elevator shaft that goes to the basement vault.
The trigger that sets all this in notion is when Mr. Gimp the casino's owner arrives with his bodyguards and accountants. It takes them a half hour to make their way through the casino to the cashiers cage. There, they will gather up the days proceeds, turn off the alarm  system and ride the elevator down to the vault.

Francis waits for the backstage party to end and then limbs up the ladder to the catwalk and up to the roof access door.
Gimp arrives at the casino entrance, Charles watches Gimps entourage pass into the gaming room. Charles heads out to the parking lot to find Louis and the Rolls.

Louis and has parked the Rolls facing the casino roof and flashes the headlights three times to give Francis up on the roof the go ahead to enter the duct work to the elevator shaft and ride on top of the elevator down to the vault.

From there he will open the access door to the elevator jump down and make Gimp and his entourage line up facing the wall. Francis will then open the armoured access door to an emergency stairway letting Charles into the vault with two bags to carry out an estimated haul of a billion francs. Francis hides the two bags in the swimming pool changing cabaña, changes into a clean suit and walks nonchalantly towards the casino entrance as the alarms and police drive up.

It all goes Noirsville the next morning when Charles shows Francis the local newspaper's headline story about the robbery with an illustrative candid shot of the casino game room that just happens to show Francis walking amongst the gamblers watching the stage show. It won't be long before the police put two and two together.

A cool heist film that's tight and stylistic, definitely feeling more modern than the previous classics. It can easily be also thought of as a Transitional Noir. All the actors are superb in their roles. A great addition to anyone's film collection. 10/10.

The Mystery Writers of America gave the film an "Edgar" as the Best Foreign Movie of the year.[Wiki]

The instrumental jazz score was composed by Michel Magne. An arrangement of the main title theme was recorded by American musician Jimmy Smith, and released as a single on Verve Records, which was owned by MGM at the time; it peaked at 96 on both the Billboard Hot 100 and on the Hot R&B Sides chart. Smith later released the album Any Number Can Win on Verve, which featured his recording of the movie theme with other covers and some original compositions. [Wiki]