In the Heat of the Night (1967) Hopperesque Noir 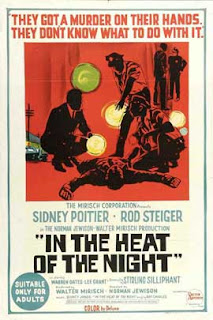 In The Heat Of The Night, through Noir shaded glasses a visual review.

Re-watched Oscar Winner (Best Picture, Best Actor, Best Writing, Screenplay Based on Material
from Another Medium, Best Sound and Best Film Editing) In The Heat Of The Night. Forget about that is was produced at the height of the civil rights struggle becoming a benchmark film that has won accolades world over and look at it terms of a sort of Edward Hopper-esque, color Transitional Noir.

The compositions and muted colors render practically every scene a visual treat. If you've never
seen it you will be pleasantly surprised, with a great Quincy Jones score to boot. 10/10 for me.

Its Noir influences are readily homaged in the 40th Anniversary Issue's menu sequence: