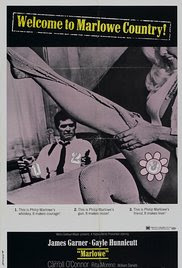 It’s all about cool, cool that aura of quiet intensity along that ever changing cutting edge balancing between conservative and excess, the spark between new and old, you know it when you see it.

William Powell had it, Noir icons Bogart, Dick Powell, Mitchum, Conte, Andrews, Ford, Holden, and Hayden had it. James Garner as Marlowe displays one of the last vestiges of classic, big city, private eye cool, surfing the counter culture tsunami of the 60s.  Yes, other P.I. depictions will follow, the majority on TV, but they will be diluted and tainted by the sea change of the Age of Aquarius, but they will be written quirky, cutesy, and PC. The only other film P.I’s that have the classic cool in contemporary settings are Paul Newman’s Harper films, Richard Roundtree in Shaft, Armand Assante in I, The Jury, and possibly Elliot Gould’s turn as Marlowe in The Long Goodbye, and Gene Hackman as Moseby in Night Moves.

Right out of the chute we are dropped both visually into Marlowe’s current case in the title sequence by the use of a nice dynamic camera aperture motif that reveals multiple candid paparazzi/surveillance photos, and audibly by a bubblegum style pop tune from the silly side of the commercial sixties. Titled “Little Sister” (sung by Orpheus) that ties the film to Raymond Chandler’s novel “The Little Sister” The tune itself then morphs into a tinny sounding diegetic song blaring from the radio of Marlowe’s top down Dodge convertible.

The car rolls along, anb only in southern California, horsehead oil pump studded beach, and up to a peace sign and flower power festooned hippy hotel called The Infinite Pad. Jammed into the chrome barred appointments of the dash is a photo of Orin Quest, the wayward missing in action brother from some hicksville Kansas fly speck who blew town down Route 66 in search of kicks. Marlowe wades through the throng of stoned out denizens and into the manager's office replete with posters, burning incense, and love beads. Marlowe soon finds out that he’s in deeper doodoo than the $50 dollar retainer chump change case warranted.

So how, you may ask, does a knight errant loner like Marlowe survive in a world of full page add, multiple operative, private investigation agencies? Well, he sublets half of his shabby suite of family-hand-me-down furnished offices to a beauty college who’s ex-pat Brit proprietor doubles as an answering service/receptionist. He is good for a few chuckles. 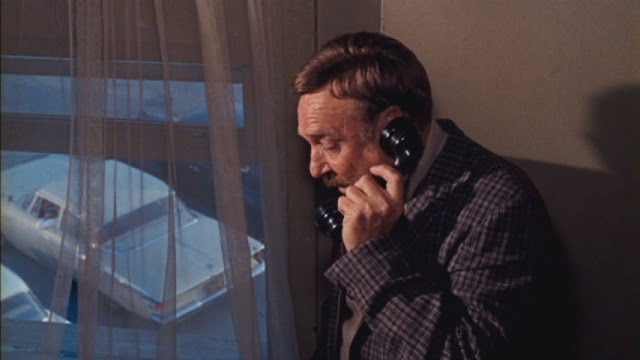 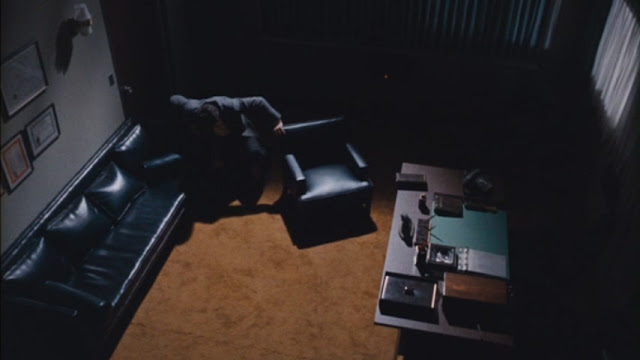 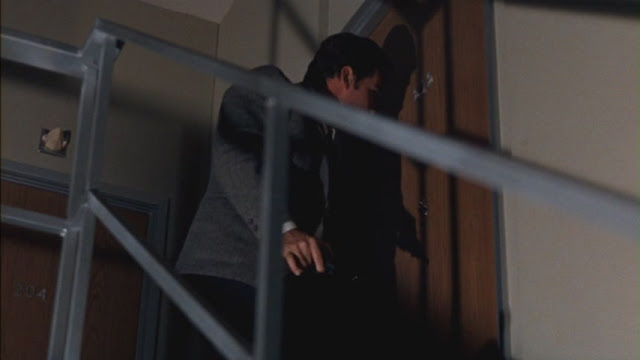 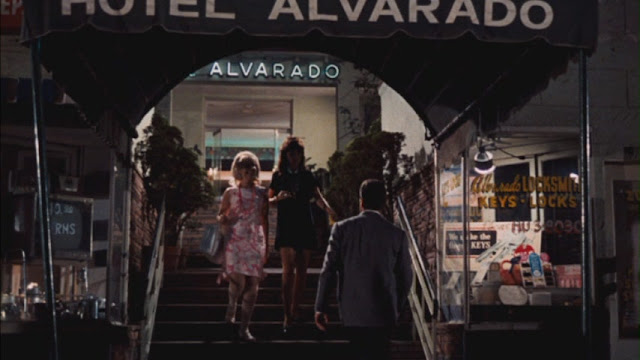 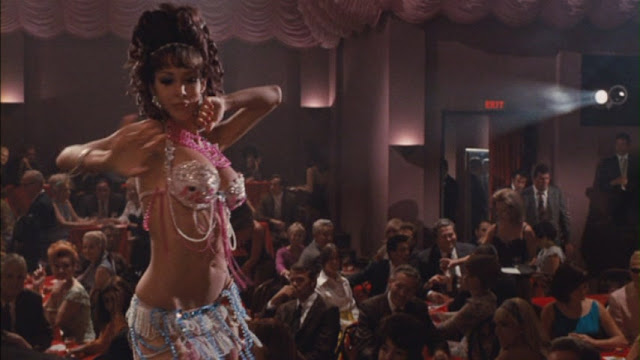 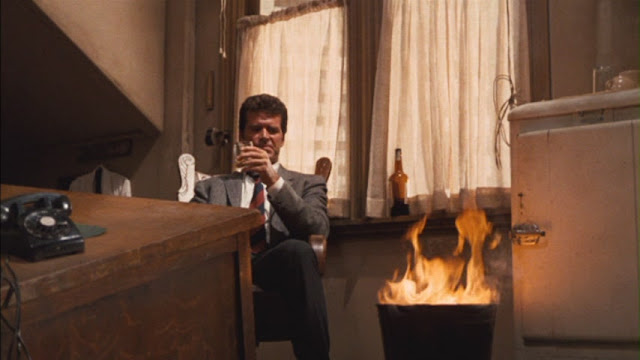 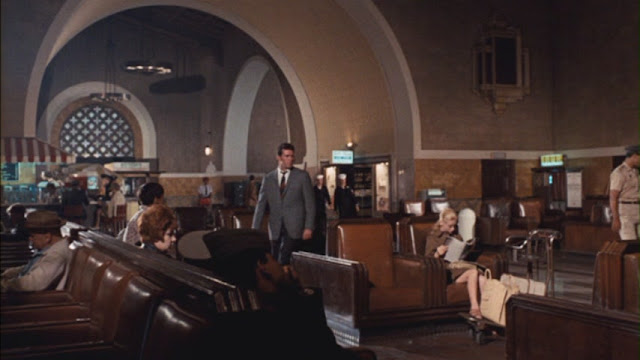 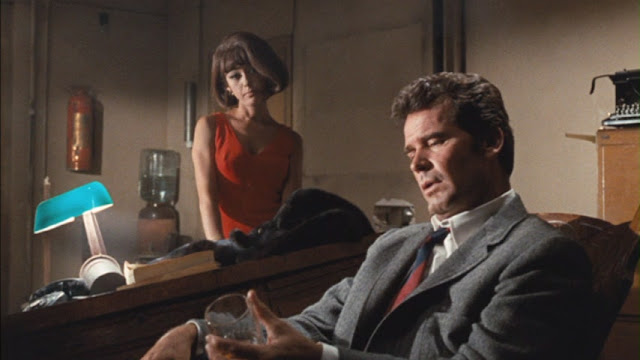 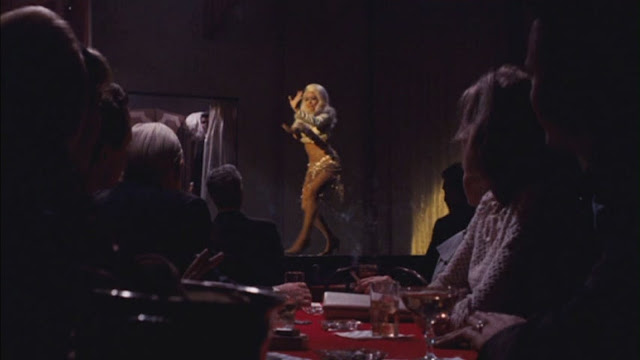 Cinematographer William Daniels (Brute Force, Lured, The Naked City) achieves a subdued almost laid back noir-ish style, photographing sleazy late 60s LA in a way that emphasizes the thin veneer of “new” that cosmetically covers the same old decay, its just Day-Glo painted now. Noir archetypes such as the Bradbury Building, and Union Station  provide a cinematic memory link to classic film noir, while modern apartments, cloud club panoramic restaurants, the Hotel Alvarado and Sunset Blvd. strip joints anchor us to 1969. The use of split screen both advances the story line and occasionally provides a bit of humor. Another segment at a TV studio juxtaposes a throwaway modern dance routine along side one of the 20 Greta Garbo films that Daniels is famous for. Garner disdains the dance number to a TV exec telling him that the Garo film is the real entertainment.

1969 contemporary Marlowe is a cool level headed professional, efficient, witty, and generous he even has a sleep over gal pal who works at the DMV who he also pumps for information. He eschews fedora and trench coat for sunglasses but still smokes a pipe and drinks bourbon.

The stories catalyst is Orfamay’s search for brother Orin and turns convolutedly into something else. Gayle Hunnicutt is Mavis Wald, a prominent TV star billed as "America's Sweetheart" an almost auguring like reference to Mary Tyler Moore & her show by the same name. Marlowe’s involvement shakes things up enough to get various seemingly unrelated individuals getting caught in a vortex with bodies piling up. Watch for Bruce Lee trashing Marlowe’s office. The repartee between Carroll O’Connor and Marlowe.  The sequence at Union Station where a woman is caught sitting at a lunch counter between Marlowe and Orfamay where they update all the skulduggery that has taken place the various facial expressions she displays are hilarious. This is a reference to a similar set up in The Dark Corner where Mark Stevens and Lucille Ball are conversing while a ticket booth girl overhears them. 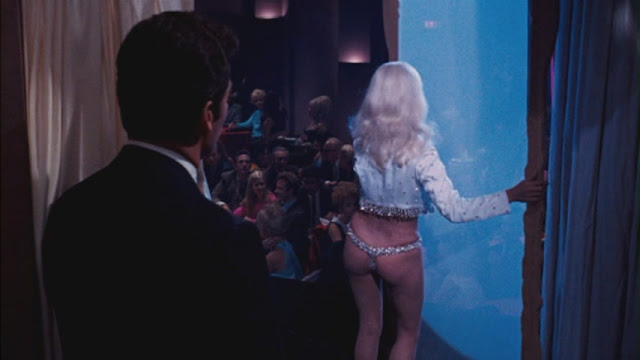 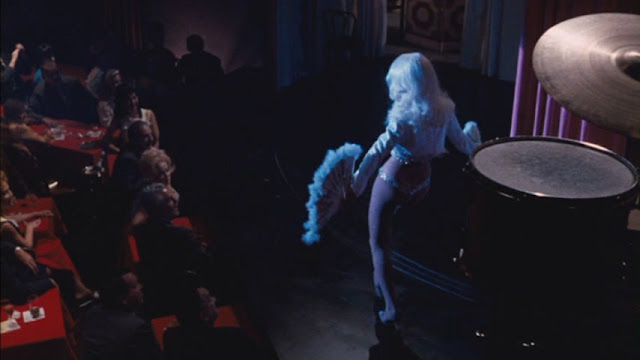 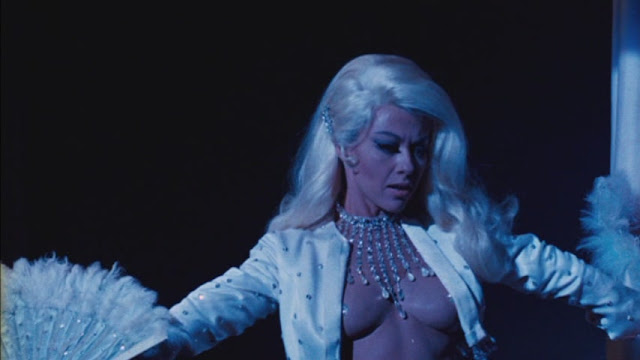 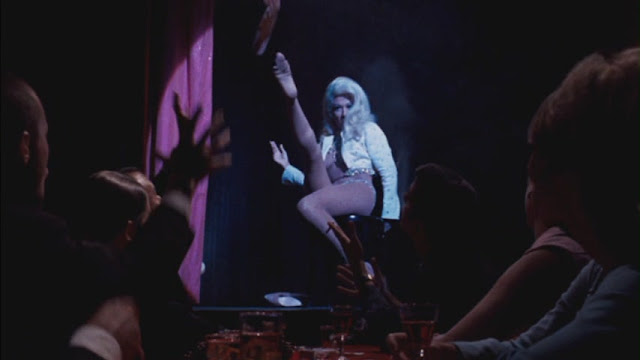 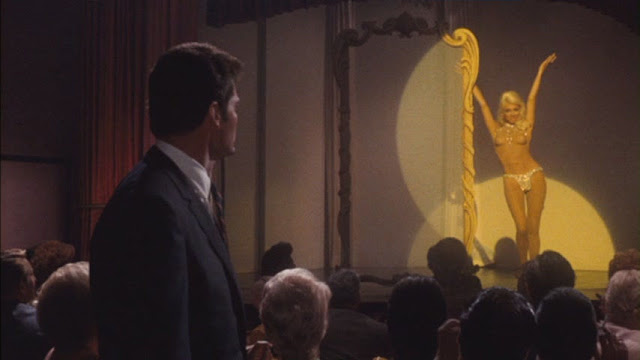 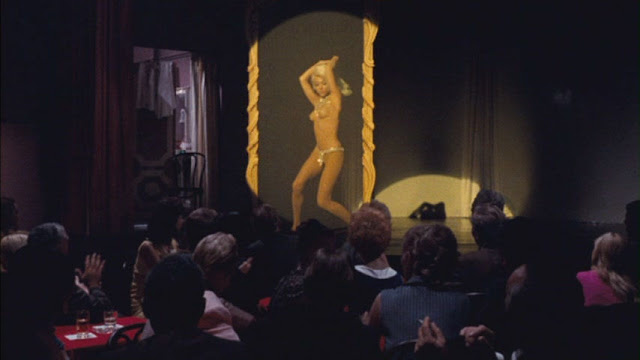 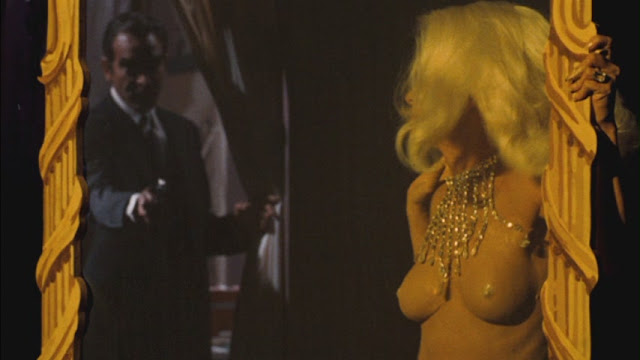 Fellows shines as Orfamay. Jackie Coogan is good as shifty Grant W. Hicks. George Tyne is a hoot as as the Hotel Alvarado house dick. Rita Moreno sizzles as stripper Dolores, doing a very sophisticated striptease routine that’s low on tease and high on strip. It makes you think of what may have been if Hollywood had not been shackled by the Hays Code. Think of the strip routines of Rita Hayworth in Gilda, Adele Jergens in Armored Car Robbery, Anita Ekberg in Screaming Mimi, Robin Raymond in The Glass Wall, Barbara Nichols in Beyond A Reasonable Doubt, even Kim Novak in The Man With the Golden Arm.


The soundtrack after the title sequence reverts into variations of a nice cool jazzy theme. If I have any quibbles it would be for even more LA location shots (especially with the cinematographer of The Naked City). DVD from Warner Archive Collection. 9/10
Posted by cigar joe at 3:47 PM