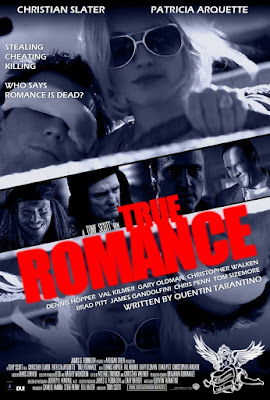 The title sequence for True Romance magically conveys us to the bleak cold desolate vortex of the Rust Belt 1990’s Detroit, but also back a million plus years to the time when fantastic tales were spun by ancient man around the first campfire. Only in the here and now, the fire is scrap wood fed and in an oil drum in a vacant lot surrounded by hobos, outcasts, and scavengers and the fantastic tale is offered with rising sparks and smoke up to the eternal  night.  A Neo Noir tale.

A heart beat of Noir.

Very few of the classic noirs used the female voice over, one that readily comes to mind is Claire Trevor’s in Raw Deal. This neo noir story is triggered in one long flashback by a voice over narration by ex-call girl femme fatale Alabama Whitman (Patricia Arquette).

In the comic book store

Arquette here is downright outstanding, if ever there was a character that captured that effervescent spirit of Marilyn Monroe’s various characters (and updates that quality to the 90s and makes it her own) in a film it’s Arquette’s Alabama in True Romance. She is a blond, buxom, bombshell, a “firecracker” the “shot from the front” sequence where she jiggles down the courthouse steps rivals Marilyn’s classic “shot from behind” wiggles from Some Like It Hot and Niagara.

You just sense that if this were still the big studio days and she was under contract she would have been typecast into many of these kind of parts in quick succession at the peak of that phase of her beauty, Arquette might have become iconic but would the price have been tragedy as it was for Marilyn? As it is her performance is just a one off. The studio days are long gone and the atmosphere is catch-as-catch-can and Arquette did not get another similar Neo Noir role until her double parts as Alice & Rene in Lost Highway. I guess time will be the judge if contract stars of the Studios or those of the new corporate deal system will be best remembered in the long run.  Arquette here ranges from sweet and coy, to desperate and deadly, her transformation into Athena with her Amazonian like war scream is chilling.

The tale unfolds as quasi comic book/martial arts/Elvis geek Clarence gets shot out of the saddle by a B-girl at a local tavern. Later at a late-night triple bill Sonny Chiba show, Alabama, in a contrived maneuver spills her popcorn over the seat on Clarence. She expresses her dismay in an instantly loveable cutesy/ditzy manor and is soon climbing over the seat and settling in beside him. They soon connect and later over pie and coffee in a diner begin to fall for each other. Clarence takes her back to his pad above the comic book store where they make love. Later Alabama confesses that she is a call girl and was paid and sent by Clarence’s boss as his birthday present. Clarence is not mad at all says it’s the best present he ever had and that it was not just the physical part but he never had so much fun with a girl ever before in his life. They pledge their love for each other and get married. The whole sequence is wonderfully written and rings so true that you suspect it is somewhat biographical.

Clarence, (Christian Slater) in probably his best role, whatch his dialogs with Alabama and his father. He is “cooler than cool” as he follows his personal rockabilly espirito Elvis in the way he deals with situations and travels life’s highways. . Elvis tells him to confront Alabama’s pimp Drexl and it’s this meeting that sends the tale spiraling into Noirsville.

The rest of the cast is superb, Michael Rapaport as Dick Ritchie a struggling  numb nuts want to be actor who lives with stoner Floyd (Brad Pitt) who has a plastic honey bear  bong. Bronson Pinchot is the weasel  Hollywood yes man  Elliot Blitzer to producer Lee Donowitz (Saul Rubinek). Dennis Hopper is Clifford Worley, Clarence’s security guard father who sings Country Western songs while making his rounds and lives in a trailer park wedged between the river and the railroad tracks. Mafioso Don Vincenzo Coccotti (Christopher Walken ) is a capo for Blue Lou Boyle. Virgil (James Gandolfini ) is a reflective hitman. Gary Oldman  is delightfully over the top as courier and pimp Drexl Spivey. Chris Penn as Detective Nicky Dimes and  Tom Sizemore as Detective Cody Nicholson are Gung ho LA cops.  Samuel L. Jackson is Big Don a spastic druggie with some memorable lines, and Val Kilmer is "Mentor" (Elvis).

Ably directed by Tony Scott with beautiful cinematography by Jeffrey L. Kimball. A great soundtrack by Hans Zimmer stitches all the segments together. True Romance is one of those films that prove that every once in awhile Noir has a pulse. A fun flick with abundant eye candy 9/10
Posted by cigar joe at 3:27 PM