Goodbye Lover (1998) Twisted L.A Noir that needed to up it a notch 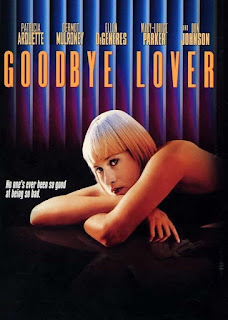 
Sandra Dunmore is a successful real estate agent handling million dollar mansions. She listens to memorized motivational tapes in her car, goes to church regularly, and she is screwing her husband Jake's brother. She also maybe Bi. Delbert is an alcoholic.

Sandra's  M.O. is to meet Ben at the houses for sale that she is listing. The houses are occupied and fully furnished but the current owners usually away on vacation trips or on new house hunting expeditions. Both Ben and Jake work for some kind of computer software company.

Ben Dunmore, is having some second thoughts about the situation because of Jake's increasingly self destructing attitude at work. He tells Ben that he knows that Sandra is being unfaithful. He tells him that if he finds out who it is he'll kill the man. Ben understandably tries to put the brakes on Sandra. But Sandra just ups the anti with more requests for illicit sex. The result is that she begins to act irrationally nd psychotic. She is becoming more out in the open at company functions about her feelings towards Ben.

Ben, at wits end, deals with the situation by emotionally falling for one of the innocent virginal seeming company secretaries Peggy Blane who has been acting somewhat infatuated around Ben.

At the company dinner party Ben nonchalantly puts his arm around Peggy's waist. She is startled but responds like an emotionally starved women. They make a dinner date to go out for Chinese food. Peggy and Ben have their dinner date.

She brings him back to her place. They sit and chat over drinks. When ben reaches out and touches Peggy's knee Peggy's eyes become as big as saucers. She quickens to his touch and they embrace. They end up off the couch and onto the floor. Ben has rounded third and  almost to home plate when Peggy puts in the hooks, telling him not tonight.

She brings him back to her place. They sit and chat over drinks. When ben reaches out and touches Peggy's knee Peggy's eyes become as big as saucers. She quickens to his touch and they embrace. They end up off the couch and onto the floor. Ben has rounded third and is almost to home plate when Peggy puts in the hooks, telling him not tonight.

Sandra has been tailing Ben and Peggy through out their whole date. She sequesters herself in the back seat of Ben's car outside of Peggy apartment house.

When Ben arrives at his parking spot to drive home he sees Sandra in the back seat. He opens the back door. The dome light goes on. Sandra spreads her legs.

She wants it now. Ben is now pissed off and drags her physically out of the car. Hell hath no fury like a woman scorned. Sandra threatens him with telling Delbert that it is him that she is boning. Nice.

Ben and Peggy make another date to go on a weekend out of town. When they get back to Ben's apartment, Ben gets a call from Delbert telling him that he knows that he is fucking Sandra and that he better get over to there apartment because he is either going to kill himself or him. Ben splits.

When Ben gets to the high-rise apartment he sees the place trashed and festooned with crazed writing  upon the mirrors and glass dividing partitions.

He finds his brother Jake sitting on the edge of the balcony. He rushes out to stop him and is blindsided by Sandra wilding a flashlight. They both give Ben a push and he goes over the balcony edge.

He's hanging on to life by his two hands gripping the railing. Sandra removes her shoe and wants to bat at Ben, but Jake tells her it will leave marks.

The whole affair was a setup. Sandra and Jake are after Ben's money. They will also additionally cash in on his life insurance policy. Ben cannot hang on long and falls to his death.

By the time the police get to the apartment the place is all cleaned up and immaculate. Sandra and Jake crying crocodile tears tell the investigating officer Sgt. Rita Pompano that Jake was drunk and feeling suicidal and Ben showed up to talk him out of it it was he who accidently lost his balance when he lunged to save Jake.

Their plan veers even more Noirsville (with even further twists) when Sandra and Jake discover that instead of inheriting Bens money, his estate is now claimed by Peggy who announces that she and Ben got secretly married a few days ago in Nevada.

Here all we get is a panty drop out of Patricia and a flash of Mary-Louise Parker's ass. A great Neo Noir has got to jump out at you from the screen. Especially if it's a sexually oriented one. This Neo Noir was basically dead in bed.

To describe it in Classical Hollywood Noir terms, instead of being on a Lang, Wilder, Siodmak, Tourneur, Fleisher, Mann Noir level its closer to a Hugo Hass type of grind 'em out melodrama, a not very memorable work. Not a lot of visual pizazz. 7/10.