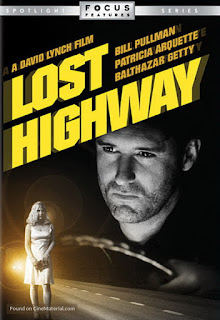 We are all just sparks of consciousness traveling at light speed through the void.

R rated for BIZARRE, VIOLENT and SEXUAL CONTENT and for Strong Language, a blue screen MPAA film rating at the beginning of David Lynch's Lost Highway, pretty much enticingly sums up one of the best of the 1990s Neo Noirs.

Psychological Noirs have always been part of Classic Film Noir, the best know one is 1950s In A Lonely Place.  Lost Highway is vaguely similar to one of its predecessors 1966's Mister Buddwing, Lost Highway is a powerful psychological anxiety filled noir, though where Mister Buddwing dealt all externally with the story, in Lost Highway it is all internal. In this case we get a clue straight up front, from the credit sequence. A powerfully graphic image of headlights speeding frantically down a dark highway, each dashed centerline flashing like fragments of thoughts. This sequence is accompanied by David Bowie's haunting "I'm Deranged" with a tinkling discordant piano, we are not dwelling with a "normal" world. We are observing a surreality through the eyes of an insane man, it's frightening, the ultimate noir, life as a lost highway in a void, with no map, and no way back.

“I like to remember things my own way. How I remember them; not necessarily the way they happened.”

Renee: You don't mind if I don't go to the club tonight
Fred:  What are you going to do?
Renee: oh stay home and read.
Fred: Read? Read what? [he chuckles bitterly, as if they don't have a book in the house]

Fred calls home to check on Renee, no one is there to pick up the phone. While Fred blows sax, round heels Renee is too, probably doing her own virtuoso playing the skin flute. Sleazeball lounge lizard Andy (Massee) and Mr. Eddy aka Dick Laurent (Loggia) are the suspects.

A videotape shows up with the mail. It's a tape that would be physically impossible to shoot, but it shows Renee and Fred in bed in their womb colored bedroom.

Fred already at the edge goes off the deep end when at a party at Andy's house he "meets" the "Mystery Man" (Blake) dressed in black. It's not quite what it seems, the music dies out and Fred has a conversation with him, it's probably all in his head and the Mystery Man is possibly the personification of evil sparked by jealousy. The Mystery Man tells Fred that "We met at your house. As a matter of fact, I'm there right now. Call me", Fred doesn't believe him the man gives him a cell phone....

There is a lot of speculation as to the nature of the Mystery Man, one interpretation is that Fred's uncontrollable jealousy invites EVIL into his "house" i.e., his head. He could also be the personification of Fred's insanity.


You can get a good idea of how much Patricia Arquette looks like Bettie Mae Page (April 22, 1923 – December 11, 2008) Bettie was an American model who gained a significant profile in the 1950s for her pin-up photos. She was often referred to as the "Queen of Pinups", her jet black hair, blue eyes, and trademark bangs have influenced artists for generations. In 1949, Page moved to New York City, where she hoped to find work as an actress. In the meantime, she supported herself by working as a secretary overlooking Rockefeller Center. In 1950, while walking alone along the Coney Island shore, Bettie met NYPD Officer Jerry Tibbs, who was an avid photographer, and he gave Bettie his card. He suggested she'd make a good pin-up model, and in exchange for allowing him to photograph her, he'd help make up her first pin-up portfolio, free of charge. It was Officer Tibbs who suggested to Bettie that she style her hair with bangs in front, to keep light from reflecting off her high forehead when being photographed. Bangs soon became an integral part of her distinctive look. (from Wikipedia)

Soon Fred finds himself just like in the last video tape in his bedroom next to the bloody, dismembered corpse of Renee and then sitting in solitary on Death Row watching the lights flicker as another fellow inmate is electrocuted.

The second half of the film is either a dream or a hallucination. Fred imagines another scenario, another life. He becomes Pete Dayton (Getty), the jail guards find Dayton in the cell that held Fred Madison, who has apparently vanished into thin air. The guards let Dayton go. Dayton works as a mechanic in Arnie's (Pryor) garage, he has a girl Sheila (Wagner), and lives with his folks (Busey & Butler). A gangster Mr. Eddy (Loggia) is a regular patron at the shop. He like's Pete for his expertise in taking care of his cars, a Mercedes and a Caddy.

One day Mr. Eddy shows up with Alice (Arquette) his mistress, who this time is in blond bombshell (a combo Marilyn Monroe, Jane Mansfield, Diana Dors) mode. Pete is awestruck, mesmerized, and soon with accelerated encouragement from Alice they are screwing feverishly on a regular basis in hot sheet motels.

From both the Madison and Dayton versions of reality we learn that Renee/Alice was most possibly a prostitute who met Andy at a club, and that Andy worked for Dick Laurent/Mr Eddy recruiting women for his porn film business. One day Andy approached Alice about a job. She was given an address and when arriving told to wait in the foyer. When she was finally admitted into the house she found herself at what looked like a private party of a dozen or so male guests run by Mr. Eddy. She was made to strip at gunpoint and we last see her on her knees before Mr. Eddy.

It's not surprisingly left to the imagination, in a perverted sort of updated Classic Noir Hayes code homage, but she apparently serviced the group, and when Pete asks her how come she didn't leave or call the police, Alice doesn't deny to Pete that it was because she liked it. Even these revelations don't deter Pete who is apparently been as they say "fucked stupid" by Alice, and when she greedily proposes a heist of Andy's house so that she can escape Mr. Eddy he's down with it.

Lost Highway is Lynch at his most audacious. It's lovingly been referred to as a “psychogenic fugue," an elaborate ellipse, or a ride on a Moebius Strip rollercoaster.  The score by Badalamenti, the various soundtracks, and the sound design all complement and greatly enhance the films eerie, nightmarish, disturbing atmosphere. A prime time Twilight Zone for adults. 10/10