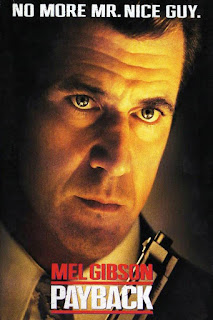 The film was shot during September/November 1997, in Chicago and Los Angeles and it inexplicably has a short sequence of the Queensboro Bridge and Long Island City. Though no city is ever mentioned in the film we might as well call it Noirsville.


The film is not without controversy "although credited as director, Brian Helgeland's cut of the film was not the theatrical version released to audiences. After the end of principal photography, Helgeland's version was deemed too dark for the mainstream public. Following a script rewrite by Terry Hayes, director Helgeland was replaced by the production designer John Myhre, who reshot 30% of the film. The intent was to make the Porter character accessible. The film's tagline became: "Get Ready to Root for the Bad Guy." A potentially controversial scene which arguably involves spousal abuse was excised and more plot elements were added to the third act. After 10 days of re-shoots, a new opening scene and voiceover track also were added, and Kris Kristofferson walked on as a new villain." (Wikipedia)

I've seen both versions. The best film version in my opinion would be roughly, the theatrical release with the narration and blue tint up to the killing of Carter (exorcising most of the Lucy Liu/Tong revenge angle) then go with the director's cut (but keeping the blue tint) to the ambiguous end. I'd keep the beating also.

The story, Porter (Gibson) major bad ass. "Don't Fuck With Me" might as well have been tattooed on his forehead.  Double crossed. Mal Resnick (Henry) and Lynn (Unger) the culprits. Cowboy-ed. Gunned down. Two slugs in the back. Left for dead.

Crawls to back alley scrape doctor to get patched. Doc is a serious boozer. He gets the job done. Porter recoups. Five months. Porter is pissed. Wants revenge. Wants his $70,000. His cut from a $140,000 heist of a Chinatown tong.

Porter bloodhounds. First Lynn. His junkie/prostitute wife. Trigger girl. Then the punk kid who delivers the bindle of horse to Lynn. Then Stegmann (Paymer) the pusher who tells him that Resnick is back in the Outfit.

The film looks great in a Noir-ish way. It homages beautifully classic noir with it voice over narration, the heavy use of stylistics and locations that evoke cinematic memory. Gregg Henry is impressive he evokes the spirit of Dan Duryea.Unfortunately the film goes somewhat slowly off the rails with various scenarios, i.e. Porter cutting a gas line under a an 80s Lincoln which would be physically impossible to do, you can't squeeze under that type of car, no way, and the unneeded extraneous additions of dominatrix Pearl (Liu ) and the Chinese Tong machine gun battle where it veers off into Action film and touches on Tarantino land, when it didn't have to, a shame. The majority of Films Noir were simple stories when you overload then with action sequences you tip the film past the noir tipping point it becomes more of the Action Genre, for me anyway.

Give it a fair shake your personal noir tuning fork may accept it more than mine does. Watch also the Film Soleil adaptation of the novel, Point Blank (1967), for a comparison, same story set in California. I haven't seen Chow Yun-fat's Full Contact (1992). Screencaps are from the Paramount DVD. 6.5-7/10