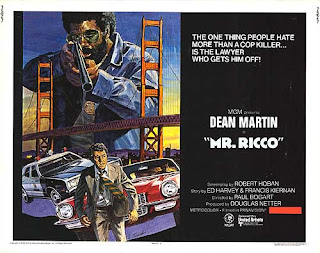 Director Paul Bogart who made his bones mostly on TV gave us Marlowe updating Chandler P.I., in a 1969 Neo Noir starring James Garner, Halls of Anger (1970) followed, it was an interracial inner city school Drama. His next feature, also with Garner and Lou Gossett Jr., was Skin Game in 1971.

It wasn't until '75 that he directed his second Neo Noir Mr. Ricco. I've found out from just viewing recently on a TCM screening, that it's also another Hollywood nod to the effects of the lucrative and successful Blaxploitation phenomena that exploded on the scene in 1971.

As I mentioned in my Marlowe review, that film was about cool, i.e., "It’s all about cool, cool that aura of quiet intensity along that ever changing cutting edge balance between conservative and excess, the spark between new and old, you know it when you see it." William Powell had it, Noir icons Bogart, Dick Powell, Mitchum, Conte, Andrews, Ford, Holden, and Hayden had it. James Garner as Marlowe had it. Poitier, Belefonte, Jim Brown, and Blaxploitation stars Richard Roundtree, and Ron O'Neal had it.

Dean Martin had it in spades. His 1965 to 1974 The Dean Martin Show came into your living-rooms weekly on Thursdays, and Deano with his well oiled shtick as a tuxedo clad, slightly drunken, work-shy, easy come easy go, happy go lucky playboy, was the epitome of smooth cool. It's too bad we never got an application of that TV persona into a serious Neo Noir when he was about ten years younger. I could see him in the roll of a wise cracking P.I. similar to Dick Powell's Marlowe. All we ever got, that was remotely close, was Dean essentially playing TV "Deano" in the Billy Wilder comedy Kiss Me Stupid.  His overly silly tongue-in-cheek Matt Helm series of films, all James Bond spy spoofs, are basically him goofing his way through burlesqued villains, and a bevy of pneumatic bimbos.

Joe Ricco has a successful law practice with a loyal secretary Jamison (Cindy Williams). He is a widower who lives with his dog and his old Italian uncle. He likes to spend his leisure time playing golf and has trained his dog to help him cheat at it, i.e., whenever his ball goes in the rough or in a sand trap the dog fetches the ball and drops it where ever Joe is standing. He also likes to plays late night card games after hours in an Italian restaurant with the owner and Captain Cronyn.

Soon after Steele is back on the streets two San Francisco police officers are ambushed in a tenement during a routine with a pump action shotgun.

A black child Luther witnesses a man running from the scene of the crime. His mother brings him to Joe and Joe takes him down to police headquarters. There Luther is interrogated by the police, and with an identikit the boy constructs a face that looks exactly like Steele's. Joe is now officially on the SFPD shit list.

Steele, and the Mapes brothers are the only ones there, The raid results in a revenge killing of a black man. Murdered in cold blood by a bad cop who plants a shot gun as false evidence. Steele gets away.

The dead man's sister Irene Mapes asks Rico to defend her surviving brother Purvis. It all goes Noirsville when it looks as if Steele is now trying to assassinate Ricco.

The film is nothing special, no real sparks, but it's an entertaining enough time waster with some nice Noir stylistic cinematography of San Francisco. Martin looks a bit past his due date in this, he's at the end of his career. It was one of his last films. Thalmus Rasulala as Frankie Steele was adequate but he doesn't really get enough screen time to showcase himself, H.B. Barnum III as the boy Luther was impressive. Eugene Roche I remember from his excellent performance in Slaughterhouse Five, he is quite believable here. The rest of the cast consists of Denise Nicholas as Irene Mapes, Cindy Williams as Jamison, Geraldine Brooks as Katherine, and Philip Michael Thomas as Purvis Mapes.

Writing Credits go to Robert Hoban for screenplay, with Ed Harvey and Francis Kiernan for the story. The cinematography was by Frank Stanley (Magnum Force, Thunderbolt & Lightfoot, The Eiger Sanction). The music was by Chico Hamilton.