Starting a new feature that I though may be interesting, short book reviews, not only about Film Noir but also covering the actual source material books and their authors. Some of the novels and short stories that have become Classic Film Noirs.

It's not surprising that those films that you got to see depicted on the screen during the Motion Picture Production Code Era were surprisingly quite watered down versions of what was on the printed page and projected without censorship with your minds eye.

Rated the fourth best crime writer of his day, behind Dashiell Hammett, Erle Stanley Gardner and Raymond Chandler, Cornell Woorich had more film noir screenplays adapted from his works than any other author. Many of his stories continue to still be adapted and updated, though I believe this material is actually best left close to the milieu it was created in.

To be brutally honest Woolrich was your quintessential eccentric New York nut job. You can check off the boxes from the list. From a broken home, check, sickly, check, failed to graduate, check, sexually confused, check, failed at marriage (unconsummated after three years, probably had something to do with the previous box), check, closet homo, probably, and from 1933 on to her death in 1957 lived with his mother, check.

And he lived with his mother, not in some swanky brown stone on the Upper East Side that you'd think would be befitting a successful author no, they lived in a squalid flop apartment in a sleazy West Harlem residence hotel, the Hotel Marseilles (Broadway and West 103rd Street see left). Their neighbors included pimps, junkies, thieves, prostitutes, confidence men, show biz low lifes, deviants, scumbags, and other assorted riff-raff.

I'm sure many of the catalysts of his stories came from overheard conversations in the lobby or in the elevator of the Marseilles, out and about around the hood, or gleamed from the daily tabloid headlines and interior page tragedies occurring daily in a city of eight million people, and combined all this with his recluse's wild imaginations.

After his Mother's death he moved to the Hotel Franconia (20 West 72 Street). This was a more upscale improvement, diagonally across the street from The Dakota, and a few doors East of an apartment house of an old girlfriend of mine (see below), This was back in the mid '60s and who knows I may have passed old Cornell on the street on my way to her apartment.

After the Franconia he moved over to the Sheraton-Russell on Park Aveune where he "was a virtual recluse. Now in his 60s, with his eyesight failing, lonely, psychologically wracked by guilt over his homosexuality, tortured by his alcoholism, self-doubt, and a diabetic to boot, Woolrich neglected himself to such a degree that he allowed a foot infection to become gangrenous which resulted, early in 1968, in the amputation of a leg.

After the amputation, and a conversion to Catholicism, Woolrich returned to the Sheraton-Russell, confined to a wheelchair. Some of the staff there would take Woolrich down to the lobby so he could look out on the passing traffic, thus making the wizened, wheelchair-bound Woolrich into a kind of darker, self-loathing version of the character played by James Stewart in Hitchcock's Rear Window."
Eddie Duggan

Woolrich is buried in the Ferncliff Cemetery in Hartsdale, Westchester, New York, it's right off I-87. I pass that way on my way to Long Island, I'll have to visit. 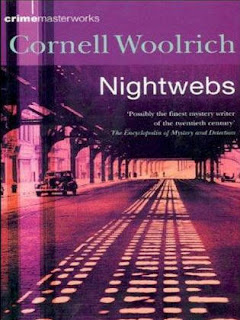 Nightwebs was published in 2002 in Great Brittan by Orion Books as part of their Crime Masterwoks series. The compilation consists of 12 short stories broken into three parts, The Claws of Night, Death and the City, and The Butchers and The Trapped. The majority of them were written between the late 1930s to the late 1940s.

The Claws of Death contains:

Graves For The Living a tale of the terror that a man experiences when his personal nightmare of being buried alive is taken to the extreme by a wide spread secret society that buries alive wayward members and busybodies. Reads like a Twilightzone srory

The Red Tide a tale of murder and robbery, and of a corpse hidden in a rumble seat of a couples car until begins to odoriferously decay worrying his unsuspecting wife and driving the murderer quite mad. A version of this became a Suspense Radio Play

The Corpse Next Door an apartment dweller keeps having his milk drained by a milk thief, who leaves the empty bottle outside the door every morning. He rigs up a crude type of fishing line with a sewing thread attached from the milk bottle to his finger and catches a vagrant who he thinks he kills after smacking his head repeatedly against the flagstone hallway. He hides the corpse in the next door empty apartment in a Murphy Bed that closes up against the adjoining wall, and is slowly driven insane by the smell of decay.  What the smell turns out to be is a hilarious reflection of the one of the real life incidents you'd go thrugh living in NYC a city of immigrants. Made into the 1980 film Union City

You'll Never See Me Again a newly wed couple have a spat over a badly cooked meal, she threatens to leave and go home to mother, He tells her to go right ahead and she walks out of her apartment and disappears off the face of the earth. The husband becomes a prime suspect in her possible murder after remnants of her clothing is found in the buildings incinerator.

Death and the City contains:

Dusk To Dawn a down, and out of work man has as a roommate who works as an usher at the Odeon Theater. The roommate sneaks him in to the show seating him up in the balcony. There, keeping warm he spots another man in the back and decides to see if he can bum some money off him. He discovers that the man is "sleeping" so he decides to steal a dollar out of his wallet. Much to his chagrin he finds the man is stabbed to death. When he tells his friend the usher about his discovery they take the body to the men's room and the usher informs the manager who calls the police. The Doorman describes to the police seeing a man in a blue suit go up to the balcony, our pickpocket, who becomes the prime suspect. The honest broke man turns into a vicious killer in increments, by adrenalin, coincidences, and circumstances completely beyond his control.

Murder In The Automat a Horn And Hardart Automat becomes a focal point for a poisoning. It's an impossible crime that is eventually quite neatly solved. A nice police procedural. This one would make a great film however you'd have to keep it period.

Death In The Air a great little story dealing with  the old Ninth Avenue el, a police detective on his way home to Staten Island and the two murders he solves, one in an old tenement along the right of way and one on the el itself. Another great film could be made of this if it meticulously re created the el outside digitally and inside with a set. Again it would have to stay period for obvious reasons when you read the story.

Mamie 'n" Me a milkman and his horse solve a kidnapping. A neat story of bygone city ways and days. Again another great story here for the screen.

The Butchers and The Trapped contains:

The Screaming Laugh At first it looks as if a man laughed himself to death by coronary reading a joke book. It's the tale of a ticklish man tortured to death by tickling, to find the whereabouts of his hidden money. by his young wife and her handyman lover.

One and a half Murders a girl is strangled with the silk shoulder straps of her own gown at an amusement pier ballroom along the Jersey Shore a detective solves the murder or does he?

Dead On Her Feet a runaway girl who is marathon dance contest contestant has been dragged/carried around by her partner for two hours though dead, stabbed with a pencil, a police detective figures out who done it.

One night in Barcelona is the tale of a black jazz band leader who was framed for the murders of two whitefolk down South by a corrupt system. An American detective from New York is taking him back for trial. The band leader tells him the story of the frame up. An interesting solution to the problem is creatively arrived at by Woolrich.

All in all  nice collection of stories.