Two of my guilty pleasures are The 7th Commandment (1961) , the story of Tad the square john who has a weakness for anything in a skirt, during one of his affairs he gets into an auto accident with his shady lady gal pal. He gets his bell rung and wakes up not knowing who he is. Apparently getting your bell rung not only gives you amnesia but also turns you, seven years later, into an evangelical faith healer raking in the big bucks. To paraphrase an old Cheech and Chong line Ted used to be f-ed up on women, now as Tad, he is f-ed up on the Lord. The second film is Strange Compulsion (1964) the story of a peeping tom with quite a bit of psychological analyzing between the patient and doctor in between the sexploitation segments.

Both films were directed by Irvin Berwick (1914-1997) who has quite the interesting biography.

(From IMDb) - Irving Berwick was a child prodigy, playing concert piano before the age of ten. Although he never gave up playing privately, his career was to be in films. His first job, in Hollywood, was as a dialogue coach, working under contract at Columbia Studios in the mid- to late 1940s and frequently with William Castle. Berwick was employed at Universal-International throughout much of the 1950s, working often with Jack Arnold on several science-fiction thrillers and westerns, and was dialogue coach on Against All Flags (1952) starring Errol Flynn, who gave him a case of expensive liquor for his services (although Berwick did not drink). During the same time period, he worked (uncredited) on the TV series Topper (1953). In 1958-59 Universal-International laid off many of its employees. Berwick then joined with make-up expert Jack Kevan to form a production company, Vanwick Productions. The company's first picture, The Monster of Piedras Blancas (1959), was a deliberate attempt to emulate the success of Creature from the Black Lagoon (1954). Universal supplied equipment and crew members in order to keep them working, even on an independent production. Shot entirely on location at Point Concepcion, California (the lighthouse scenes), and nearby Cayucos (the beach and town scenes), the film featured a monster suit that Kevan created primarily from odds and ends of other monsters used in other Universal Pictures films: The Mole People (1956) (the hands), This Island Earth (1955) (the feet), Creature from the Black Lagoon (1954) (basic body construction). Kevan gave an entirely original texture and head to the "Piedras Blancas" monster. Ironically, the film was not shot at the real Piedras Blancas (some 50 miles away), since that location was judged not to be as photogenic. The Vanwick team followed that film with The Street Is My Beat (1966), which turned out to be Berwick's favorite film. Like "Piedras Blancas", it featured character actor John Harmon, who appeared in nearly every film Berwick made. Harmon is also the godson of Berwick's son Wayne Berwick (who played the little boy in "Piedras Blancas"). Berwick worked variously as a producer, director and second-unit director on his own and other producers' films throughout the 1960s and 1970s. In the early 1970s he began teaching filmmaking through the UCLA Adult Extension, which he continued for nearly a decade.

Irwin Berwick directed  The Monster of Piedras Blancas (1959), The 7th Commandment (1961), Strange Compulsion (1964), and the apparently missing The Street Is My Beat (1966) which stars Shary Marshall who starred the year before with Steve Chochran in his last Noir Film Tell Me In The Sunlight (1965) the story of a sailor and a stripper.

The Street Is My Beat (1966) is the story of a 19-20 year old recent high school graduate who is wined and dined into marriage only to find out much too late that hubby is a pimp. He starts pimping her out of a hotel room to various johns, and has a string of similar "wives" in his stable. Judging from The 7th Commandmant (1961), and Strange Compulsion (1964), The Street Is My Beat would probably been in the same noir-ish vein, the subject matter would have given the film a legitimate reason to add a little sexploitation. I can't find any info about it other than it may have been a long drawn out production there is a clip of sorts from 1961 made at the time a book tie in was published. Whether it's a legit part of the film, I can't say. Anyway it would be nice to locate this one, below are a couple of posters. 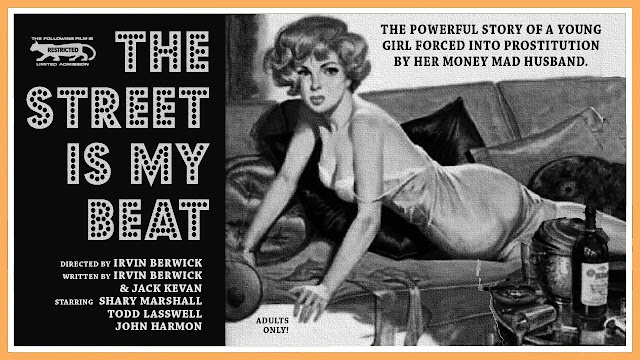 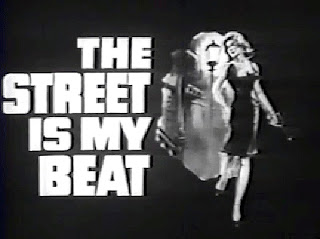