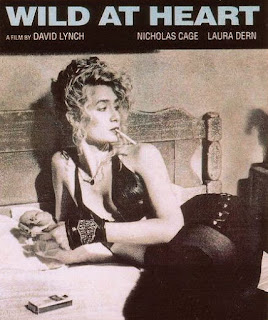 Of course this being a David Lynch film Wild at Heart is the crazily twisted story of a couple of wild silly kids, "Sailor and Peanut", (Sailor Ripley (Cage) a Elvis channeling delinquent and Lula Fortune (Dern) a refreshingly free spirit, she declares that she's "hotter than Georgia asphalt"). The pair flee the Wicked Bitch of the East (her domineering mother) and literally screw their way across a wizard-less OZ on a sexually scorching Film Soleil road trip to the Emerald City (L.A.) They are pursued by human demons (channel the flying monkeys) who catch up to them in a shithole called Big Tuna, Texas.

A match ignites an inferno accompanied by what sounds like the overture to an Italian Classic Opera it is the defacto leitmotif for the passion of Lula and Sailor. The opening credits appear  over this and this segues to a society function in a large cathedral like interior. Subtitle "Cape Fear. somewhere between North and South Carolina" The initial sequence has Marietta Fortune (Ladd) Lula's mother, hiring a thug, Bob Ray Lemon (Dandridge) to knife Sailor after he refused her drunken advances in the Men's toilet. Nice huh?

Sailor brutally beats Bob Ray Lemon's brains out, be warned it's in your face graphic.

The manslaughter charge resulting lands Sailor a 22 month and change stint at Pee Dee Correctional. Lula and her blue 1965 Ford Thunderbird ragtop are at the gates at his release. She's brung his snakeskin jacket which he throws on...

Sailor: Did I ever tell ya that this here jacket represents a symbol of my individuality, and my belief in personal freedom?
Lula: About fifty thousand times.

They head to a Cape Fear Motel and practically set the bed on fire, here and elsewhere a speed metal tune,  "Slaughterhouse" by Powermad, accompanies their excessive rutting, both Sailor and Lula seem insatiable.

They begin their road trip odyssey through a world of flashbacks, parallel storylines, and characters that play weirdos, freaks, and lunatics, ten times as bizarre as any created by Frank L. Baum. Here is a breakdown of Lynch's grotesques:

Johnnie Farragut (Harry Dean Stanton), a sad sack of a Cape Fear P.I. who is also Marietta's very easily manipulated boyfriend. You can picture Elisha Cook Jr. in the role.

Marcello Santos (J. E. Freeman ) a local gangster and Marietta's other boyfriend. She contacts him to put out another hit on Sailor.

Mr. Reindeer (W. Morgan Sheppard), a decadent New Orleans crime boss who converses with Santos while sitting on a toilet with a bevy of topless handmaidens in attendance. He is Santos contact in New Orleans. He will arrange to carry out the hit on Sailor.

Dell (Crispin Glover) Lula's deranged cousin who obsesses about Christmas, wears a filthy Santa costume, puts cockroaches in his underwear and is convinced that a black rubber glove is a harbinger of an alien takeover.

Perdita Durango (Isabella Rossellini ) the daughter of Juana, an off beat B-girl who once ran with Sailor but is now in cahoots with Bobby Peru.

Girl in car accident (Sherilyn Fenn). Sailor and Lula happen upon a roadside accident the mortally wounded girl is a tragic figure.

The Good Witch (Sheryl Lee), who appears to Sailor in her classic bubble, telling him not to give up on love.

00 Spool (Jack Nance), who is crazier than a shithouse rat.


Uncle Pooch (Marvin Kaplan) Lula's sleaze ball "uncle" who raped her vaginally and orally when she was 13.

Of the main characters Nicholas Gage is very entertaining as Sailor, doing his combo Elvis, James Dean, Brando riff. Laura Dern is cute as kookie Lula a free spirit who has escaped and survived, she may not be the sharpest tool in the shed but she has a lot of heart. Diane Ladd is wonderfully over the top in the Classic Noir period you can see a Joan Crawford, Barbara Stanwyck, or a Betty Davis in the part.

You can spot some homages throughout the film, Yojimbo' s is obvious, The Fugitive Kind is more subtle, and I'm sure the Dell character is a reference to the weird Dell in To Kill A Mockingbird. There are probably other ones to find.

It's sort of a surreal fairy tale film for adults. It's Lynch's stylistic schtick, you have to just sit back and let it wash over you, it won't be for all tastes. Screencaps are from the DVD, entertaining 7/10