"Sport? Are you kidding? If there was headroom they'd hold these things in sewers."

The story originally debuted as a teleplay in 1956, with Jack Palance in the lead, it also had an uplifting ending. This 1962 big screen version is decidedly darker and melancholic. The 1962 film opening sequence is a fighters bar called a "Graveyard" the denizens are glued to a TV, we hear a prisefight, this segues into a POV of the fight in progress the camera against Cassius Clay, an homage to Robert Montgomery‘s Lady In The Lake (1947), and Dark Passage (1947). 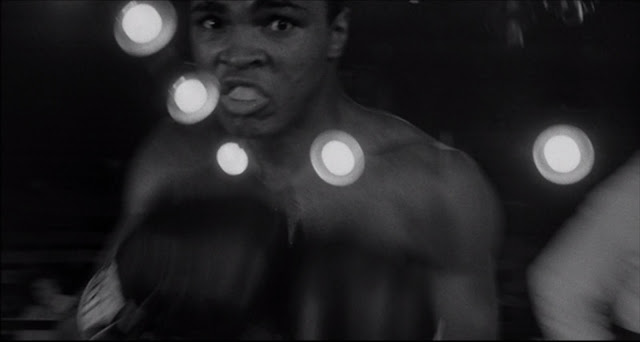 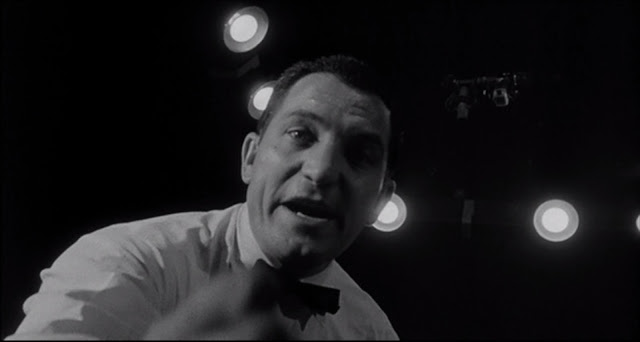 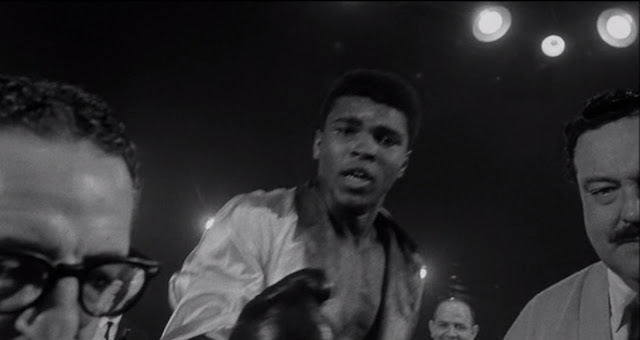 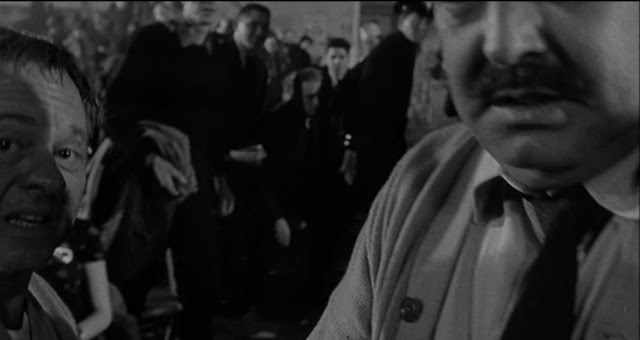 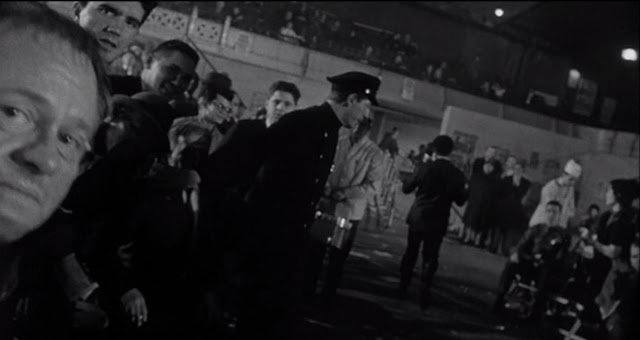 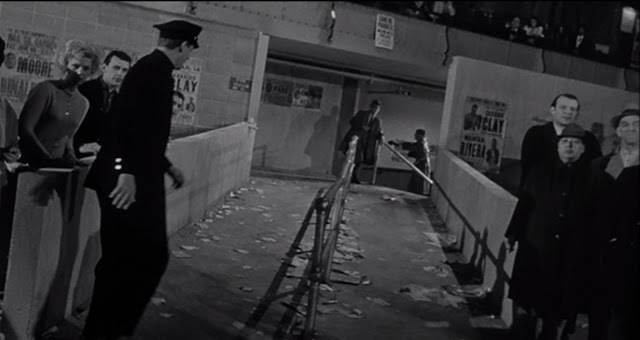 The POV sequence comes to a close when Mountain Rivera (Quinn) see's himself reflected in a cigarette machine mirror.

The tale is of boxer, Mountain Rivera, a proud, inarticulate, fading, aging, heavyweight, past his prime, once ranked at number five, who battles in a bout with Cassius Clay (playing himself) to a tragic career ending injury. The Doc tell him he's through, another good punch and he'll be selling pencils with a tin cup. He must adjust to finding work out of the ring.

Maish: Maybe he's lucky at that, at least he walks away with his brains, that's more than most. 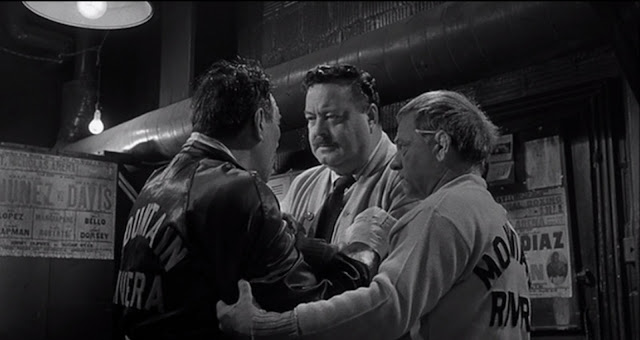 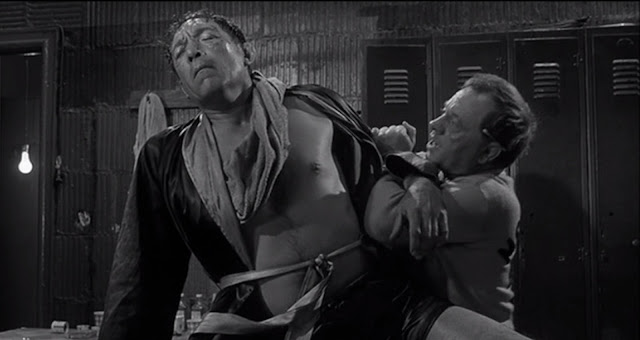 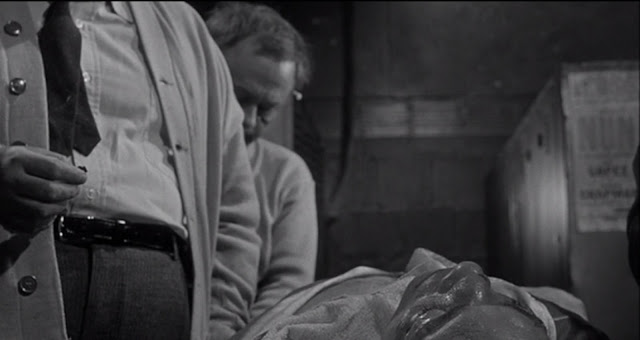 His cut man Army (Rooney) is heartsick for his fighter, the man he has both celebrated triumphs and nurtured wounds with. Mountain knows nothing else but prise fighting. He's never had any other job, or life for that matter outside the ring. His manager Maish (Gleason) of 17 years is desperate, he not only bet against Mountain (putting a wager of $1500 on him not lasting two rounds), but also convinced the local bookie Ma Greeny (played convincingly by Madame Spivy) who fronted him the $1500, to put up her money also. He now owes them big time, and Mountain is out of boxing. Maish has boxed himself into a corner. He's not a complete douchebag, he still feels for Mountain, but self preservation is number one. 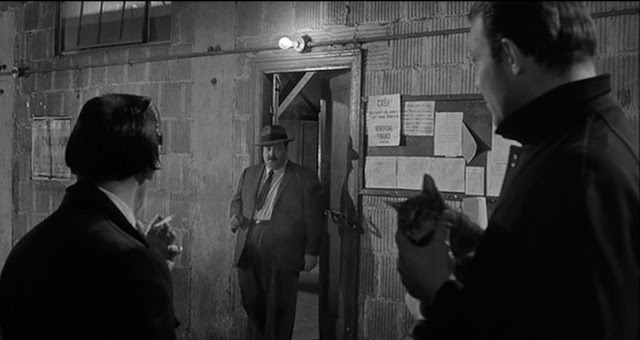 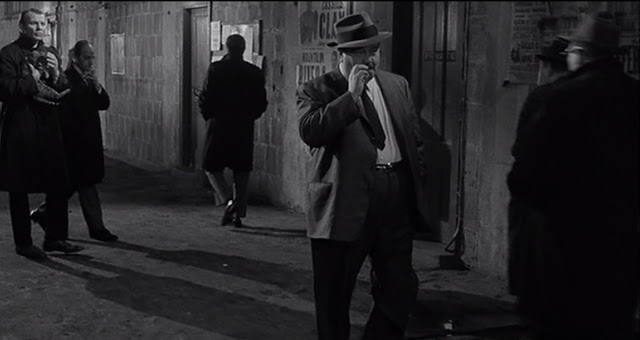 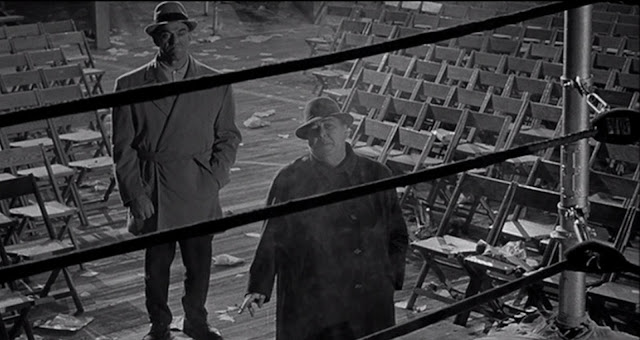 While Army is helping Mountain find a job through the wanted ads, Maish is cooking up a seamy scheme with a wrestling promoter Perelli (Adams) as a way of using Mountain to payback his debt to Ma Greeny. 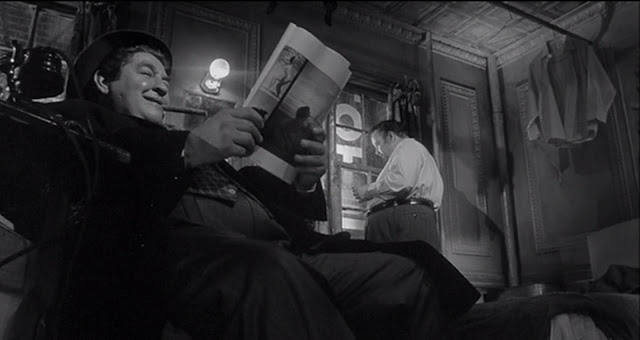 After a few rejections, Army takes Mountain down to the local N.Y.S. employment agency to apply for work. While there he talks to a surprisingly compassionate employment agent Grace Miller (Harris). Grace takes a special interest in Mountain fixing him up with a shot to be a councilor at a kids camp up in the Adirondacks. 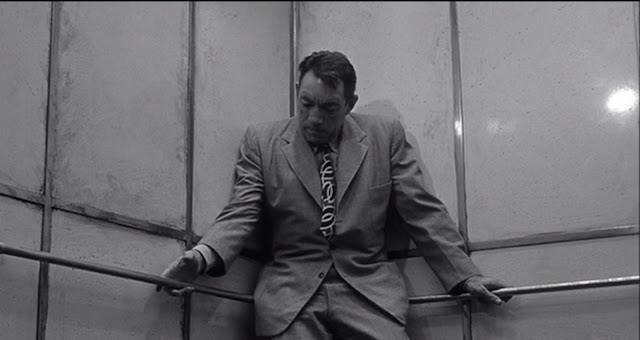 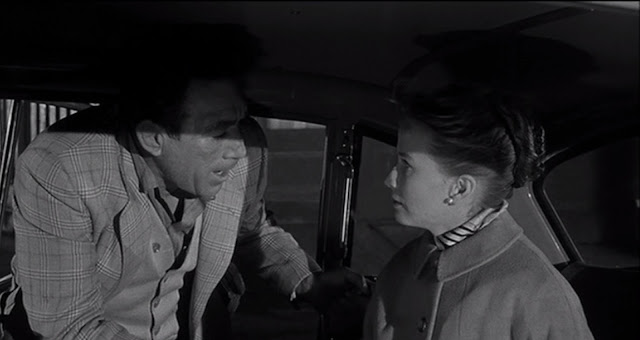 Of course the prospect of Mountain working in the Adirondacks will put the kibosh on Maish's plans to keep Mountain in the ring, so he sets about sabotaging Mountain and ko'ing everything to Noirsville. 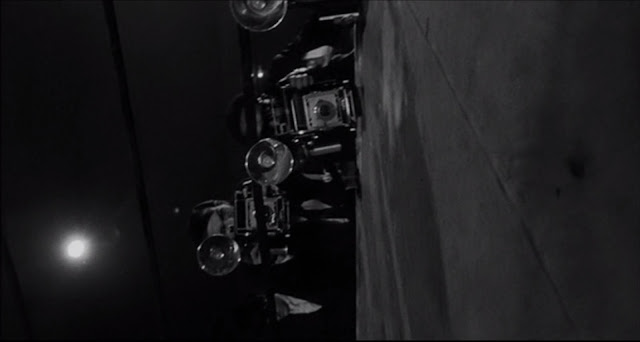 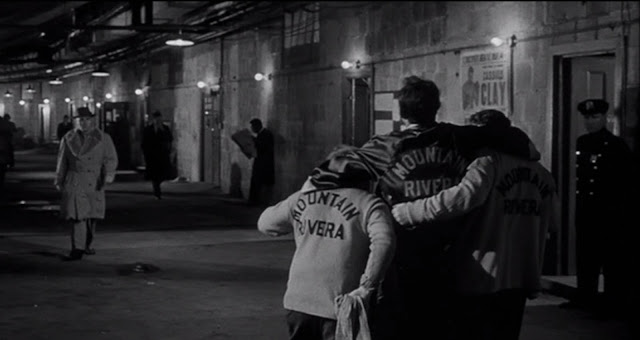 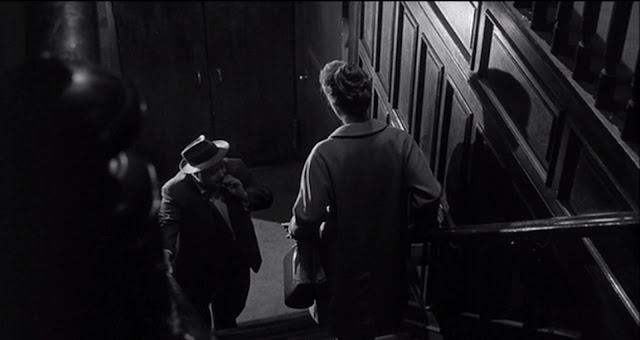 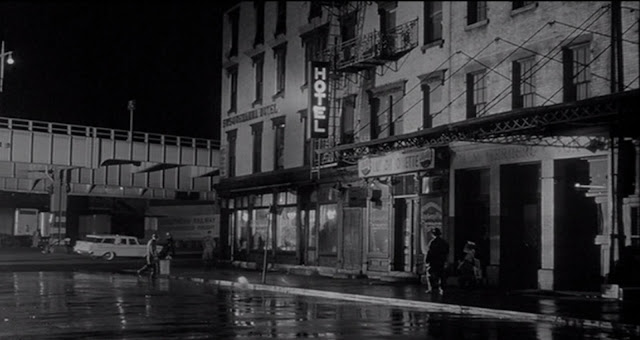 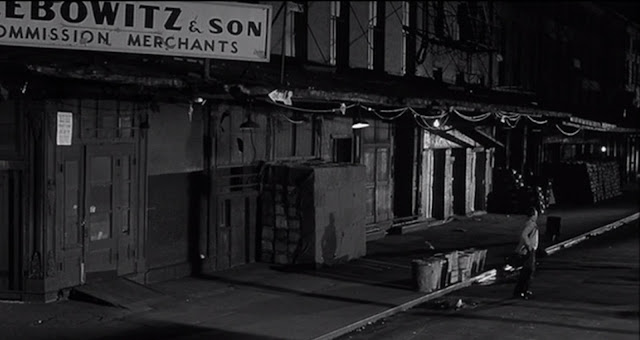 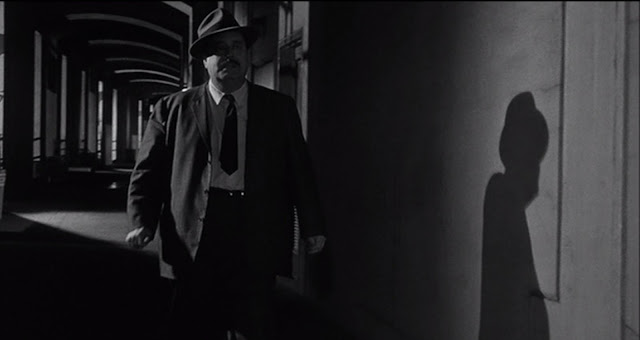 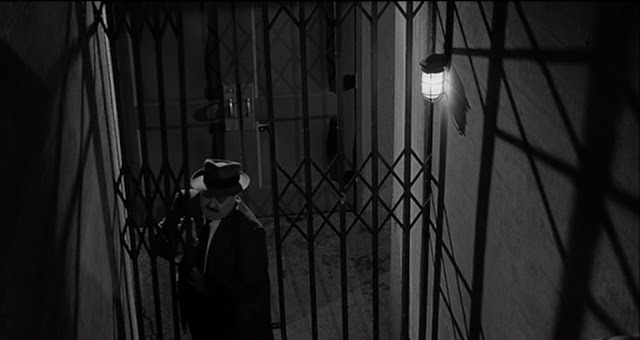 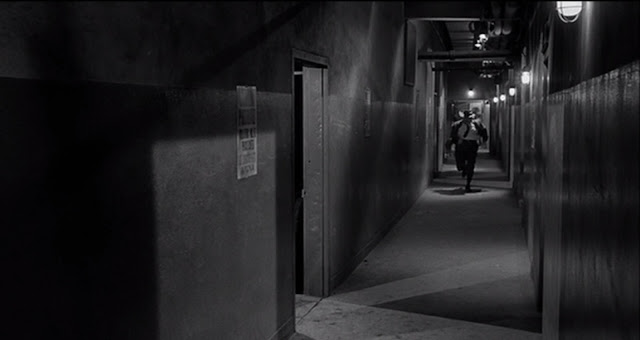 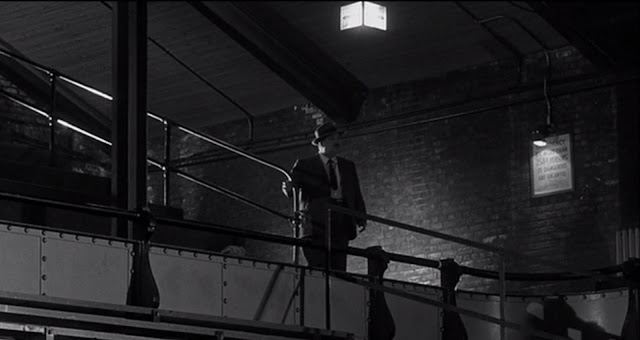 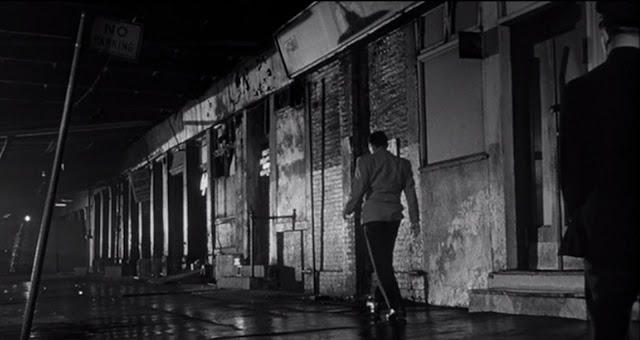 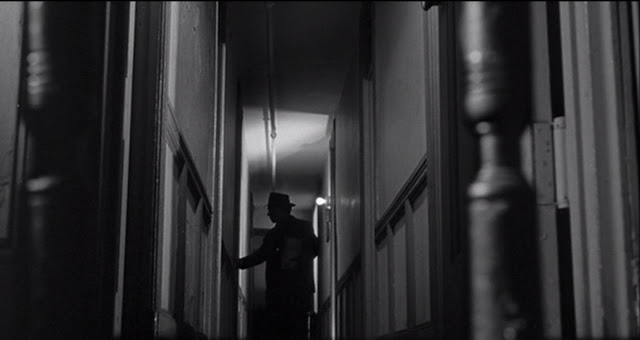 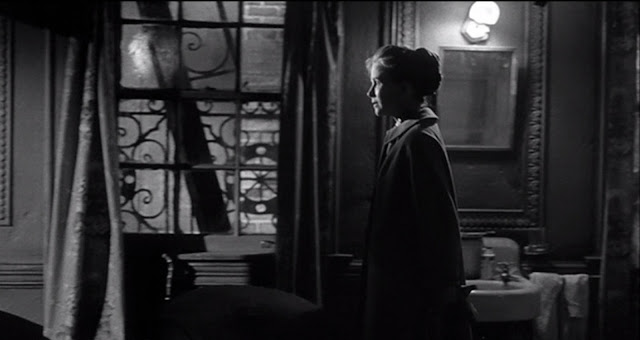 Anthony Quinn as Mountain Rivera is unforgetable, as a vet of 111 fights he sports for this role, a many times broken nose, cauliflowered ears, bruised, lacerated, and smashed eyebrows, swollen cheekbones, and he talks in a raspy-wheezy voice. He clings to the only didnity he knows, the ring, but can't quite fanthom the reason he must stop.

Jakie Gleason is great as Maish the pragmatic sketchy heel who you feel a bit of empathy for, Gleason even throws fans of The Honeymooners a few bones during his card playing sequence with Mickey Rooney doing a  Ralph Cramden and Ed Norton riff.

Mickey Rooney shines as the melancholy, cutman with a heart, and Julie Harris is playing her regular schtick, a spinster, (at least for me, since that is the role I've usually seen her play), albiet one with a heart of gold. Her sequences with Quinn are both touching and disheartening.

Madame Spivy, is uniquely off putting as an obese froglike lump in mans clothes who rules the sewer of the bookmaking world with a cadre of goons. You get reminded of the great Shirley Stoler.

All said and done you get the feeling that the actors actually did train and fight together for 17 years, their relastionships are that believable. The screencaps are from the Columbia Pictures DVD. 10/10 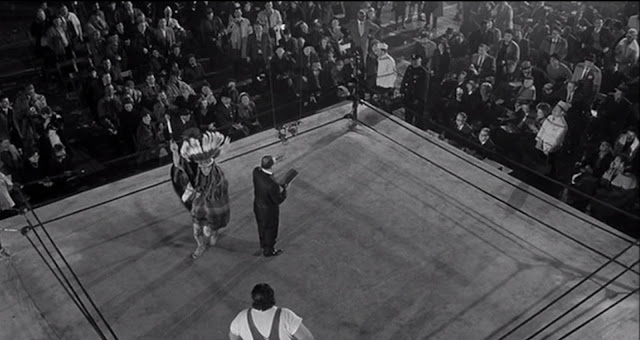