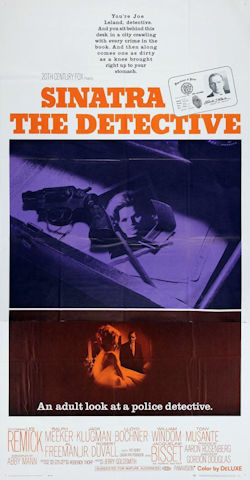 Of the films I've seen directed by Douglas some have been great some so-so, he was in the business since the Our Gang comedies, even directed Laurel & Hardy. This one is a decent Transitional Noir 7/10

The stylish title sequence begins with a slightly disorienting shot of an upside down skyline reflected in, what you first might think is a puddle. You expect a ripple to discombobulate the image, but it's not a puddle its a mirror image on the quivering hood of a car. An unmarked police car that is moving through the upside down street grids of New York City. Upon this we get the credits.

The 1964 Dodge A-100 pulls up in front of an upper East Side Brownstone apartment house. Detective Joe Leland steps out. Walks past a couple of uniformed patrolmen guarding the bottom of the stoop and another guarding the foyer.

There Joe meets and gets introduced to one of his newbie precinct Detective Squad mates Det. Robbie Loughlin, and then they both walk up the stairway to the crime scene.

The apartment belongs to Teddy Leikman. Son, apparently of "the" Leikman some political or influential bigwig who is cozy with City Hall.

The apartment is all floral wallpaper and dark walnut woodwork festooned with black Grecian marble statuary and potted ferns. Joe and Robbie are "inroduced" to Teddy's severed penis, oh no we don't get to see it, this is still 1968, the new motion picture rating system wouldn't come into effect until late 1969. There was a sort of sliding scale of films pushing the envelope. Here in America the Independent and Grindhouse Productions were the Avant Garde of this new found freedom. They exploited it to make money. In this Hollywood production we are still in the ever crumbling Code enforcement territory.
This is a Transitional Noir, so it's left to your imagination. So ladies, it's either a button mushroom or a deflated balloon.
After swallowing hard, and getting over that initial shock, they find Leikman, cooling to room temperature, laying near the top of a two or three step split level stairway. His head is bashed in and he's probably bled out through his wiener stump. Robbie takes notes as Joe describes the scene for the official report/record. They check the rest of the apartment. They find beach sand on a rug near a closet and semen stains on the sheets. The police photographer and coroner arrive and being to collect evidence.
When they come out of the apartment they meet the upstairs tenant a young women who identifies herself as Teddy's "beard" escort.

Back at the station house we meet one of the stalwarts of NYPD drama Horace McMahon who plays what else, a high ranking police official. McMahon shows up in almost every memorable 1950s on  depiction of the NYPD until his last appearance as a police officer here in this film. He provides a healthy dose of cinematic memory.
McMahon's first screen credit was in 1935. He was at first relegated to playing hood rats and lowlifes with character names the likes of Brains, Slugger Mears, Foghorn Murphy, Bugs, Cry-Baby, Floyd 'Bat' Douglas, Punchy, Dead Eyes, Snuffy Deegan, Louie, Lefty, Swifty, and Lockjaw.
In 1951 he played Lt. Monaghan in his first Noir,  Detective Story. He then played various NYPD ranks in The Blackboard Jungle, Jerry Lewis's The Delicate Delinquent, a long turn from 1958 to 1963 in 112 episodes of TV's Naked City. He also played various non NYPD police and law enforcement officials up to 1969. He gives the film some gravitas.
Back to the story...
The 19th Precinct runs from Central park to the East River and from 59th Street north to 96th Street. it's pretty much the affluent Upper East Side. Once past 96th Street the topography of Manhattan dips down to the low lands of of East & Spanish Harlem. To complete the tableau, the old New York Central RR tracks pop out of the tunnel at 97th street and continue onto a combo viaduct & el with a Station at 125th Street before crossing the Harlem River.
With the clues, and evidence they gather Detective Joe Leland and his squad tackle the case.  Capt. Tom Farrell stresses to Joe that it's a high profile case and he's getting heat from City Hall.
During this investigation we get sidetracked by flashbacks to Joe's marriage to Karen Wagner Leland (Lee Remick) who he met going up the stairway to City Hall. It's a sort of love at first sight meet cute. Since this is 1968 and the code is gone Remick shows a bit of side breast and a bare back. woo, (she also shows a bit more in the same year as this film No Way To Treat A Lady. This is all quite quaint and illustrates the bind Hollywood was in since European, New York Independent and Time Square Grindhouse films were comparatively showing a lot more T&A by 1968.

The marriage goes sour when we find out that Joe's working hours triggers an unfortunate fissure that creates an avenue for Karen's slight proclivity for nymphomania. She can't help her self. When Joe finds out and the marriage is toast.
These, as the Film's poster states "Adult look at a Police Detective" psychological angle, sidebar flashbacks, slow the pace of the film down.
In the 1940s and 50s noir this stuff is all handled by subtext a 10 second montage and a Voice Over. It should have been expedited a bit more.

So Joe and his squad start following leads, they start raiding known homosexual lairs. Here again if you are a New Yorker or ever saw Cruising you'll be surprised that instead of showing the police raiding various gay bars, etc., etc., and them knowing that Leikman was very wealthy, where does the the squad raid? They go slumming some ersatz, impromptu "truck stop" of parked box trucks in an industrial zone that apparently are used for regularly scheduled "cluster-fucks." lol
Here again, with this and Leland's marital woes we'd probably have to go back to get a better handle on what taboo storylines the MPPC was preventing them from showing in 1968.
When the squad flips up the corrugated track door on a truck, they find a withering mass of participants on the floor, but still all dressed up. WTF. It looks ridiculous. Here is where they should have went back to the subtext and imagination work around that they used for the code. You know, shoot it from the side of truck looking at the reaction of the police raiders when the door slips up. Some sarcastic lines from the cops and the reaction looks on their faces would have let the audiences minds fill in the rest a lot more accurately. Instead we get the unclimactic reveal and then the sarcastic remarks.

Anyway the whole purpose of the scene is to have Robert Duvall as Det. Nestor get a little to worked up about it. Subtext that Abby Mann or the author of the book needed to insert back in 1968.

When they check out Teddy Liekman's ("Liekman" get it, another heavy handed touch) gym, the body building trainer readily identifies the face as belonging to Felix Tesla. Felix lives down at "residence hotel" on shore at either Coney Island or Rockaway. It's not specified which, but you can see the distinctive wooden groins that project into the ocean that those two beaches employ, and at one point in time both had hotels.

When Joe and Robbie get to the flop Felix takes off running down the beach through a side exit. They catch him and book him.
There's a big scene where Tony Musante gets the good cop bad cop treatment and Joe being the good cop finally breaks through Musante's hysterics and gets a confession.

Tesla is obviously insane but it's a quick show trial and conviction, Joe gets a promotion and then gets a ring side seat for Musante's squat in Mr. Sparky's hot seat at Sing Sing.
Then it all goes Noirsville.
Noirsville

The film is a bit uneven juggling the murder investigation the relationship between Joe & Karen (that doesn't really spark), a seemingly unrelated suicide investigation that at first doesn't make sense, and a dip into police corruption.
It's a case of trying to cram too much into a 1 hour and 54 minute film. Another WTF moment besides the "cluster fuck" is Joes drive to Karen's psychiatrist house from NYC and we cut to the obvious California Pacific Coast a 3,000 mile trek. They probably didn't want to spend money to film back around the environs of NYC so I ask why even put in an establishing shot at all?
Sinatra and Remick are good in this but there is not real spark. I liked seeing Ralph Meeker too but his character is far from his peak as Mike Hammer in 1955's Kiss Me Deadly. Jack Klugman in an early role is fun to watch investigating the crime scene and interacting with his stereotypical Jewish wife. A Noir with a decent command of the dingy Noir color palette. Worth a looksee 7/10.
Posted by cigar joe at 7:43 PM