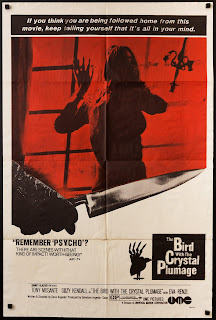 Written and Directed by Dario Argento (writer Once Upon A Time In The West).

Mention Giallo to me and immediately I think of three things, blood, a fetish for elaborately staged slasher films, and boring, rich, impeccably dressed, upper crust European whackos. Subjects of the types of films that I don't really relate to and usually avoid. I like gritty Noir films about seamy, down and out low life's, cruising down their personal boulevards of broken dreams and doom to taking the first off ramp to Noirsville.

Maybe you have to be an average lower class European to really like Giallos and to enjoy seeing the ultra rich and well off bourgeoisie hacking each other to pieces with razor sharp utensils. It must be pleasingly cathartic. How louche of them.

Before it even had a name you could see the harbingers of the Noir style in early German Expressionist - Crime, Gangster, and Horror films. The Cabinet of Dr. Caligari (1920) Dr. Mabuse, der Spieler (Dr. Mabuse, The Gambler) (1922) and Nosferatu (1922) which somewhat, ten years later, influenced the visual style of Hollywood's The Public Enemy (1931), Little Caesar (1931),, I Am a Fugitive from a Chain Gang (1932), and Scarface (1932), along with Dracula (1931) and other Universal Horror Films.

Back in Hollywood the hard boiled Crime and Suspense fiction of Hammett, Woolrich, Cain, and Chandler, continued the style in film adaptations Crime Noir films The Maltese Falcon (1941), Double Indemnity (1942),The Big Sleep (1946), and Suspense Noir Street of Chance (1942), along with Psychological Noir The Lost Weekend, plus there was a string of very High Noir Stylistic, Val Lewton Horror/Thriller Noir productions that included Cat People (1942), The Leopard Man (1943), I Walked with a Zombie ( 1943) and The Seventh Victim  (1943).

Classic Hollywood Noir continued from 1940 to the end of the 1950's. What happened at the end was that during 1950s Hollywood was loosing their audiences to competition with TV. Previously the pool of dark themes and subject matter that Noir forged into stylish films, were held in check by a voluntary Motion Picture Production Code. Think of Hollywood productions under the Code as having a guardrail of violence on one side and a guardrail of sex and taboo subjects on the other.

When the Big Studios began to get serious competition from television, they needed an edge to get butts out of the living rooms and into the theaters they began to no longer enforce the code and to explore more previous banned subject matter. The guardrails disappeared. Then independent producers in competition with the Hollywood Studios tried to out do them by being the avant guard of exploiting the new freedoms. The legal challenges of, and ever changing benchmarks to the obscenity laws and to the old taboo themes weakened the bulwarks of the pool and that arbitrary "dam" holding back all creativity burst out with predictable results.

So those Film Noir that went too far over the line depicting violence started getting classified as Horror, Thriller (even though they were just say, showing the effects of a gunshot wound, or dealing with weird serial killers, maniacs, and psychotics, etc.). Those that went too far depicting sexual, drug, torture, etc., situations were being lumped into or classed as various Exploitation flicks, (even though they are relatively tame comparably to today's films). The the noir-ish films that dealt with everything else, except Crime, concerning the human condition were labeled Dramas and Suspense. Those that tried new techniques, lenses, etc., were labeled Experimental. Some films are so so bad in all aspects that they acquire the "so bad it's good" Cult status. These Film Noir we label the Transitional Noir.

So Giallo was born in that Transitional Noir decade and then came of age in the beginnings of the Neo Noir era where they finally left their "On the Cusp of Noir" status to become truly "sui generis" - their own genre - Giallo.

Based extremely loosely on Fredric Brown's novel The Screaming Mimi. In fact, since I have read that novel the only connection to The Screaming Mimi is the opening detail, that an attack takes place behind a glass door (a residence hotel or apartment house in the novel) and that the weapon used was a knife. The witness in the novel could not get inside to the victim, a stripper, because her (the strippers) German Shepard was going bat shit crazy vicious in the foyer behind the glass where she lay.

Two more tidbits that may be of interest are, one the "Screaming Mimi" of the title is a small mass produced novelty statue of a screaming woman, not the name of the stripper. The second tidbit is that the strippers dog is not only her pet but a part of her act. The dog is trained to remove her various articles of clothing.

The outstanding cinematography of The Bird with the Crystal Plumage was by Vittorio Storaro (Last Tango in Paris, 1900, Apocalypse Now, The Last Emperor and many more) with excellent Music by Ennio Morricone (the Westerns of Sergio Leone and of course many, many more classics).

Sam Dalmas. Writer. American. On working vacation. Rome. Girlfriend Julia. Model. English. Both are at the end of their holiday. Leaving for the states in a few days.

Sam, walking back to their apartment witnesses, through a gallery window, an attempted murder taking place in a high end gallery. A woman in white is struggling with a black clad man on a second story loft. A large knife is visible. Sam rushes across the street enters through the outer door of the gallery and pounds against the inner window. The two inside break apart. The woman is bleeding. The man jumps off the stairway leading to the main floor and runs out a side entrance. He pushes a button which closes the outside door trapping Sam in the entryway.

Sam is now trapped. The woman gallery owner Monica Ranieri, is lying bleeding on the floor. Sam gets the attention of a pedestrian on the street who calls the police. When the police arrive Sam tells Inspector Morosini what he saw. A ambulance arrives and also Alberto Ranieri Monica's husband and co owner of gallery.

Sam is taken down to police headquarters where his statement is taken down. He tells them that something about what he witnessed struck him as odd, but that he can't put a finger on what it was. Sam is informed by Morosini that Monica was the fourth target of a serial killer killing Roman women. Sam is repeatedly questioned about the details of what he can remember to see if that jogs his memory. Sam is also separated from his passport and told that he must delay his flight to the U.S.

Then on top of all that, while walking back to his apartment Sam is followed by the black clad assailant and attacked with a cleaver. However the attack on Sam was thwarted by a woman's outcry. Morosini puts a protective tail on Sam.

So Sam finally gets home and matter of fact-ly relates to Suzy the incredible events of the evening. Sam tells  Morosini what happened and he puts a protective tail on Sam.  During the coming days Sam continues to flash back to the crime. He becomes obsessed with trying to solve the riddle of what exactly he saw. After another woman is slain, Morosini encourages his amateur detective efforts which includes Sam interviewing the pimp of victim number two a prostitute, visiting the antique shop where another worked.

At the antique shop Sam discovers that the murdered woman's last sale was curiously, a bleak painting of a man in a raincoat stabbing a woman to death in a barren field. Coincidence?

Sam and Julia get a threatening phone call from the serial killer, and then while they walk together one  night the police bodyguards gets run over by a car and an assassin jumps out, chases Sam and Julia and  tries to shoot Sam.

Sam then next visits the artist Berto Consalv for any leads he tells him that he doesn't paint that type of crap any longer.  Consalv tells Sam that he only paints mystical subjects now.

While Sam is off looking for clues, Julia is almost attacked at their apartment, her quick thinking to lock and barricade the door plus the timely arrival of Sam saves her.

When Sam receives the next phone call the police have his phone set up to record the killer. On the tape recording the police try to identify the background noises to see if they can pinpoint better the location of the killer possibly that way. Sam's friend Professor Carlo Dover thinks he recognizes one of the sounds.

Argento directed a classic. You can see the influence of Classic Noir in the excellent lighting and frame compositions of Storaro in the film. Argento gives a nod to the hand of Alfred Hitchcock in the general theme of a man getting obsessed with an investigation into a crime. Sam Dalmas is much like Hitchcock characters Barry Kane in Saboteur, Jeff Jefferies in Rear Window, Dr. Benjamin McKenna in The Man Who Knew Too Much, and Richard Blaney in Frenzy. Musante is compelling. The rest of the cast are easily believable

Argento also incorporates various McGuffins into the plot while Morricone's score greatly complements the story. For me, much more a Neo Noir than the Giallos to come 9/10.