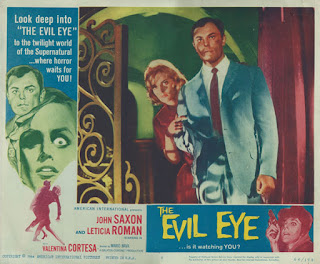 On the Cusp Between Noir and Giallo.

Again here is a title where I really wasn't expecting much, and then I get blown away by it's excellent Noir Stylistics. Where the fuck has this one been on Noir Film lists? Its got beautiful cinematography, a good story and a pinch of dark picaresque humor. An American cut of the film was titled The Evil Eye.

The Evil Eye runs 1:26. It pads out the John Saxon - Leticia Roman love story, adding a bit to the beach scene. It adds more length to the dinner with the paranormal professor exploring the SciFi - Fantasy tangent than the Italian cut, it's probably meant to allude to the "Evil Eye" angle of the title. The American distributors were maybe trying to cash in on the  Psycho (1960), Homicidal (1961), What Ever Happened to Baby Jane? (1962), craze in the states with a fillm already in the can. It fits right in to the list between ...Jane? and the next years Hush...Hush, Sweet Charlotte 1964. But it still plays way more Noir (and like a Hitchcock at that) than Horror.

The American cut also excises the whole" it could have been a marihuana cigarette hallucination" tease, but adds a sequence with a pedestrian two person lift that is like chair lift but without the chair. It has round base supported by a pole hanging off a cable The base is surrounded by a bird cage used as a safety bar and it carries two adults standing on the base while holding on to the center pole. The scene is used in the trailer for the film (see below).

Watch the original cut first, it moves right along like a fine tuned engine.

Email ThisBlogThis!Share to TwitterShare to FacebookShare to Pinterest
Labels: John Saxon, La ragazza che sapeva troppo, The Evil Eye, The Girl Who Knew Too Much