"Change the darkened street to a dry, sun-beaten road. Convert the dark alley to a highway mercilessly cutting through a parched, sagebrush-filled desert. Give the woman cowboy boots and stick her in a speeding car, driven by a deranged man whose own biological drives lead him less often to sex than to fights over money. Institute these changes [to film noir] and you have film soleil." - DK Holm

In the city it's usually what you can't see that can kill you. In the desert everything you see can kill you. 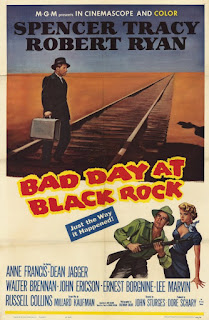 It must be Saturday. Hicksville. Everybody's in town. Cowboy porch lizards. Relaxin'. Shootin' the breeze. Waitin' for the Streamliner to blow through. She's Greased lightning. Like clockwork. The day's big excitement. A faint rumble. The train's a comin'. You can hear the drone of the F7's down the valley. The pitch changes. The horn blares. Station agent excited. She's stopping. A train hasn't stopped here in four years. What's up. Lizards all rubbernecking.


A man gets off. Looks like a city slicker. Suit, tie, fedora, suitcase. A Stranger. Ex career vet. A one hand man, Macreedy (Tracy).

Adobe Flat! The name raises bristles. He's lookin' fer Komoko. It stirs the hornet's nest. The lizards get standoff-ish. Hostile. Downright rantankerous.  The shit hits the fan. Oh Komoko, the Jap, he left town they tell him, sent to an internment camp.

They telephone the biggest toad in their pond Reno Smith (Ryan). But the cat's already out of the bag. Something is wrong, slantindicular, cattywampus. Macreedy knows they're bullshittin'. But he doesn't know why.


Cowboy Coley (Borgnine) is glassing Macreedy from a boulder patch. He ambushes him on the way back to town. Tries to run him off the road. Back in town Coley is still trying to provoke, trying to raise sand.

The film gradually reveals, through some very deliberate pacing by Director Sturges, that almost all of the townies are in cahoots with Komoko's murder. It seems that on the day after Pearl Harbor Reno Smith went into Sand City to enlist, he was rejected. He goes on a bender.  He gets a handful of the townies corned up. They go out to Komoko's. A lynch mob.  Komoko locks himself in. They burn his house. He runs out on fire. Smith shoots him dead. The sheriff does nothing. The rest of the town clams up.

Spencer Tracy goes from stoically laconic to determinedly obsessed as the odds and the towns alienation build against him. Robert Ryan's unfriendly persuasion streaks more vicious as the truth is slowly exposed. Ernest Borgnine and Lee Marvin are the two town bullies both are a few cards short of a full deck. Dean Jagger the town lawman and Walter Brennan a sawbones/mortician are the town drunks. John Ericson is a fidgety hotel keeper and Anne Francis servers as the film's nominal femme fatale.

Rather than stark black and white contrasts and Dutch angles this Film Soleil uses subtle clashing colors, high and low angles, compositions, reflections and diagonals to enhance moods and emotions. A red/green clashing motif signifies, unease and apprehension that something is slightly off, is especially apparent in the hotel interiors. High and low angle perspectives enhance or detract the importance, significance, or power of various characters or places. The high angles of the opening sequence enhances the insignificance of Black Rock. Diagonals -off kilter. Reflections can show contemplative characters, complexity or duplicity. Compositions also define characters and enhance Macreedy's exposure.

The tide turns as slowly Macreedy bests the conspirators and persuades the doc and the sheriff, to admit their cowardice and hypocrisy and the partially guilty hotel clerk to tell him the truth about what happened to Komoko at Adobe Flats. The whole shebang goes sour quick.

Doc T.R. Velie: Four years ago something terrible happened here. We did nothing about it, nothing. The whole town fell into a sort of settled melancholy and all the people in it closed their eyes, and held their tongues, and... failed the test with a whimper. And now something terrible's going to happen again -- and in a way we're lucky, because we've been given a second chance.

The film juxtaposes the high desert grit of a weathered bleached bones town against a backdrop of astonishing but desolate beauty. The film has a fascinating Edward Hopperesque realism look to it. This was MGM's first release in Cinemascope. Screencaps are from the Warner Brothers DVD. 10/10