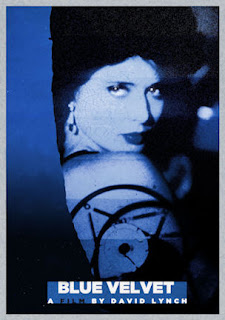 Blue Velvet's premise is based on The Hardy Boys and Nancy Drew. These were fictional characters who appeared in various mystery books for children and teens. The characters were conceived in 1926 for the Hardy's and 1930 for Nancy Drew, by Edward Stratemeyer for the Stratemeyer Syndicate. The syndicate paid ghostwriters to write the stories. The Hardy Boys' stories are often linked to the various cases their detective father is assigned to.. He sometimes asks them for help, while at other times they stumble upon the bad guys and clues that are connected to his cases. Nancy on the other hand was the daughter of an attorney and similarly her cases consist of those which she stumbles upon and some of which begin as cases of her father's.

It's through the relative innocence of the films amateur detectives that we enter bizarro world. But just don't think of Blue Velvet as The Hardy Boys and Nancy Drew go to Noirsville. They go to

Jeffrey Beaumont (MacLachlan). A Dexter. Neat. Preppy. Boy Scout Type. Back home in Lumberton. The old man had a stroke. He has to run the store. Hardware. He schleps hoses. He mixes paints. He goes to visit the old man. Pop looks f-ed up.  All wires and tubes. Jeffrey is bummed. He takes a shortcut back. An empty lot. A trash dump. He throws rocks at a bottle. Misses. Looking for more rocks, whoah!, WTF! It's an EAR. A frickin' EAR! Molding green and crawling with ants. Jeff just found a one way ticket to the dark side.

Jeff's small time average life is now thrust into the middle of a mystery. He's jacked. He bags it. He tags it. He takes it to Detective Williams (Dickerson) the neighborhood cop. Williams is cool. They get along. The Morgue. Coroner. He thinks it's off a live one. Cutoff with scissors. Nice. Clues. Later that night Jeffrey visits the Williams'. He meets Sandy (Dern). The daughter. Homegirl. Blond. Cute. She's cool. She knows about the ear. Her bedroom is over dad's den. She hears things. Confidential Hush-hush stuff. She's Jazzed. Leanin' gal pal. Jeffrey's amped.

Jeffrey gets brainstorm. Grab a bug sprayer from hardware. Get overalls. Pose as exterminator. Get into Dorothy's apartment. Open window. Come back nighttime. While she is at the club. While she does her set. Snoop. Find more clues. Sandy will act as decoy to distract Dorothy. Sounds easy. Sounds cake.


Jeffrey gets into Dorothy's apartment. She bought the bug con. Jeffrey sprays. A knock at the door distracts Dorothy. It's a man dressed in a yellow jacket. Jeffrey calls him the Yellow Man. Jeffrey finds a spare key. Forget the window he'll go in by the door. Jeffrey and Sandy plan. They go to The Slow Club. They drink a couple of Heineken. They watch Dorothy. She does her Blue Lady schtick. She's slightly off key It's all a bit off. But she's mesmerising. The crowd loves her. It works.

Jeffrey is in. He wants to snoop. But he has to pee. Heineken. Dorothy drives up outside. She's early. Sandy Honks. Jeffrey flushes. He doesn't hear the horn. He starts to snoop. Key goes in lock. Lights switch on. Dorothy is home. Jeffrey is screwed. Closet is close. Hide.

Dorothy gets call. She gets anxious. She drops to her knees and retrieves a framed photograph hidden under her sofa. She looks at it. She puts it back. She goes to her bathroom. She gets naked. Comes back wearing towel. Goes to closet. Opens left side door. Gets her blue velvet robe. She doesn't see Jeffrey.

Dorothy sits down on her sofa. Jeffrey shifts his position and something falls in the closet. Dorothy hears the noise. She's frightened. She darts to the kitchen. Jeffrey SWEATS. She grabs butcher knife. Jeffrey is SHOOK.

Dorothy flings open right side door. Jeffery! 8 inch butcher knife LOOMS. Dorothy looks CRAZED. Jeffrey's SCREWED. She orders him OUT! She ORDERS him down on his knees.

She demands his wallet. Reads his name. Jeffrey Beaumont.

Dorothy Vallens: What are you doing in my closet, Jeffrey Beaumont?

Jeffrey stammers that he came to look. Dorothy thinks he's a voyeur. She asks him what did he see? He tells her. She tells him to take off his clothes.

Dorothy Vallens: I want to see you.

Jeffrey hesitates. He's CORNERED. She JABS the knife towards his face. She nicks his cheek. You don't argue with a CRAZY woman. You don't argue with 8 INCHES. Jeffrey strips. He's down to his boxers. She makes him stand. She tells him to come closer. She pulls down his boxers. Jeffery's EXPOSED. The moment of truth. Is this the END of Jeffery? Is it GOOD-BYE to the baloney pony?

No, it goes TWISTED. It goes NOIRSVILLE. Dorothy begins to FELLATE Jeffery. Jeffery is STUNNED. Jeffery LIKES IT. Jeffery has KINK. He looks down at Dorothy. She still holds knife. Dorothy yells "don't look at me".  She orders him to the sofa. She climbs astride him. There is a loud knock at her door. Dorothy PANICS. She makes Jeffery Hide in the closet. She unlocks her door and lets in Frank.

The genius of Blue Velvet is that just when you think that it can't get any weirder than this IT DOES. Dorothy gets a wooden chair and places it facing the sofa.

Dorothy Vallens: Hello, baby.
Frank Booth: Shut up! It's Daddy, you shithead! Where's my bourbon? Can't you fucking remember anything?

Frank Booth (Hopper) has got to be one of the most bizarre villains to ever grace a movie screen. He STRUTS into the living room. He goes through this ritual of degradation with Dorothy. She sits in the chair facing Frank on the sofa. He orders her to OPEN her robe. He orders her to SPREAD her legs. He tells her to "Let me SEE it".

Frank get on his knees in front of Dorothy. He pulls a gas mask from his inside jacket pocket. He inhales deeply. Frank is a NUT JOB. Frank's got some SCREWS LOOSE. Frank is seriously DERANGED.

Jeffrey emerges. He consoles Dorothy. She's grateful. He wants to call the police. Dorothy FREAKS. No police. Frank has a hold on her. He has her husband and child hostage. She does what Frank wants. Desperate Dorothy tries to seduce Jeffrey again. She want him to HIT her. She's a masochist. Jeffrey says NO. She tells him to leave. Jeffrey starts to leave , she tells him to STAY. Dorothy is not playing with a full deck either. She's wound a bit too tight.

The next day Jeffrey tells Sandy what happened omitting his sexual encounter. He asks Sandy "Why are their people like Frank?" He goes back to The Slow Club with Sandy and watches Dorothy again. He spots Frank. Watching. He has his crew. Paul (Jack Nance) a space cadet, Raymond (Brad Dourif) a yes man, and bead bedecked Mike.

Jeffrey tells Sandy that he will tail them. Jeffrey waits in car. He follows to Frank's apartment. Jeffrey spends the next few days shadowing Frank around taking candid photos of his associates. One of them is The Yellow Man. He reports his findings to Sandy.

But Jeffrey's got a serious kink now. Dorothy has a hook in him. He's under her SPELL. He has to go back. He has to SEE her. He does. They have sex. She wants him to hit her. He won't. She PUSHES. He gets PISSED. He hits her. He's horrified. She's orgasmic.

Leaving her apartment after their tryst. Jeffry runs into Frank and his dimwit crew out in the hall. Dorothy tells Frank that Jeffrey is a neighbor. Frank is  PISSED. Frank takes Dorothy and Jeffrey for a JOY RIDE.

Again just when you think you've seen the weirdest it's going to get, it gets surreal.

They head to what they call "Pussy Heaven" a whorehouse, cryptically called in neon, "This Is It", run by Ben (Stockwell) a suave effeminate pimp. There, Frank requests a performance.  Ben lip syncs in a stupefyingly performance to Roy Orbison's hit "In Dreams", while the music plays Dorothy gets to see her son "little Donny". Frank is first mesmerized, mouthing the lyrics, then disturbed. He ejects the cassette.

The In Dreams sequence Blue Velvet

The JOY RIDE continues ending up at a lumber mill. The log deck yard. Frank gets out his inhaler and begins to molest Dorothy. Jeffrey punches Frank. Frank is enraged. Frank's crew drag Jeffrey from the car. Frank gets dorothy's lipstick. He smears on. He kisses Jeffery.

Frank then savagely beats Jeffery to a replay of "In Dreams". Jeffrey comes to by a log deck the next morning. He heads to the police station to report to Detective Williams. He walks into Williams office and finds The Yellow Man. The Yellow Man is Williams partner.

Lumberton is a composite of Missoula, Montana, Sandpoint, Idaho, Spokane, Washington, and Boise, Idaho, all logging and mill towns of the Pacific Northwest where David Lynch spent his childhood years. It was also my stomping grounds for 24 years. The area was again featured in Lynch's Twin Peaks and Twin Peaks: Fire Walk With Me. Wilmington, North Carolina adequately fills in for the fictitious Lumberton. It's only glaring difference is it's noticeable lack of pine fir and larch trees.

The score by Angelo Badalamenti and the various integrated classic soundtracks compliment the film. Blue Velvet is a pedal to the metal gloriously over the top ride to Noirsville. Screencaps are from the 2006 MGM special edition DVD. 10/10