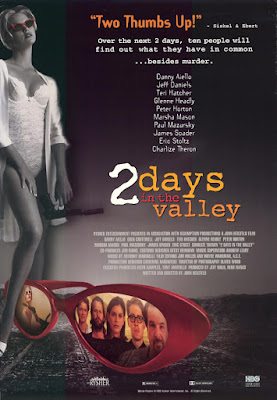 "You have one minute to decide the rest of your life..."

Written and Directed by John Herzfeld.

Cinematography by Oliver Wood and Music by Anthony Marinelli. Film Editing was by Jim Miller and Wayne Wahrman. 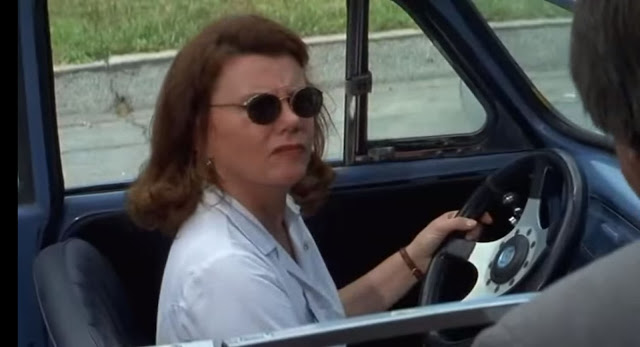 Its Lee's gig. Dosmo is his backup. Its an uneasy and unlikely business relationship.

Dosmo Pizzo: How did you find me?

Lee Woods: In the phone book under Washout.

Dosmo Pizzo: Hey, you go through a little dry spell, what's it make? It makes you stronger.

They are surveilling the house of American Olympic Skier Becky Foxx. They watch with binoculars and eavesdrop over a bug. Her ex-husband Roy has stopped by and is trying to make the moves on her.

When things quite down Lee and Dosmo make their move. The drop down the hill to the back of the house. Break in. In the bedroom, Becky and Roy are asleep on the bed.  Lee pulls out a large hypodermic and stabs it into the ass of Becky. It's a trank. Becky's out. But Roy awakened by the jolt, finds Domso's revolver stuck in his mouth.

Lee takes over, hops onto Roy's chest, pulls out a stop watch and starts it.

Lee Woods:  You have one minute to decide the rest of your life.

Lee asks Roy about a relationship with Helga Svelgen. Wants to know if they did it. Thinking it might save him Roy answers yes. Lee blows his brains out.

Later, parked at an abandoned building site with an old pool that overlooks The Valley.  A settling of accounts. Dosmo is the patsy. Lee shoots him. Fakes evidence to make it look like the suicide of an addict. Then opens the trunk and sets a timer that will blow the gas tank of the Century.

A 1993 Buick Park Avenue pulls up driven by Helga Svelgen. Lee hops in. They make out.

Meanwhile, a bullet proof vest wearing Dosmo is not dead. He's exited the Century and is surrying down the hill when the explosion goes off.  he rolls into the back yard of Allan Hopper. Hooper is a dealer in high end new age kitsch.

At Hoopers, Dosmo takes Hooper and his assistant Susan Parish hostage and decides to hold out there until all the police activity brought on by the car explosion dies down. Hooper who is suffering from kidney stones, had prior to Dosmos arrival called his sister Audrey who is a nurse for her medical advice.

While all the above is going on, Teddy Peppers a forgotten writer/director, four months behind on his rent is contemplating suicide. While he is about to pull the trigger at the grave of his mother he spots Audrey who is visiting the grave of her boyfriend on the way to see her brother Allan. Teddy has a dog and it's his concern for his companion that spurs Teddy to ask Audrey if she wants to take the dog off his hands. One thing leads to another and Teddy hops in with Audrey and the eventually end up at Allan Hoopers.

Two Valley police officers on a mission to bust massage parlors come upon a hysterical Becky who had awakened from her sedation splattered in blood laying next to Roy with his brains blown out.

All these various storylines trickle together on their way down the drain to Noirsville.

It probably got lost in the aura of Pulp Fiction. The characterizations are crisp, well developed, the dialog is very knowing.  All the principals of the stellar cast perform admirably and the pacing is quick. A fun Neo Noir. 8/10