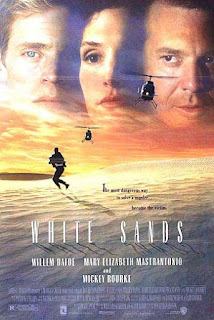 Deputy Sheriff  Ray Dolezal (Willem Dafoe) has a dead body and a half million dollars sitting at the edge of the Rio Grande Gorge in the New Mexico desert.

The film is initially captivating, the body, discovered by an Apache helicopter pilot hauling two amateur archaeologists, is lying in an adobe ruin, with his brains blown out. Coroner Bert Gibson declares "It's a suicide," made even more probable with the discovery of a half million dollars in an attache case. The banter between Gibson and Dolezal about Dolezal's new cowboy hat is amusing. This reprises later at the autopsy where a phone number is discovered on a piece of wax paper as part of the undigested stomach contents. The dead man is named Spencer.

Normally in Classic Noir the protagonist starts to make stupid decisions that propel the film down the road to Noirsville. In White Sands though there are way too many of these implausibilities to believe. Combined that with interesting but un important characters that appear then just vanish and unnecessary plot complications and you have a film that goes a bit off the rails.

Dolezal, posing as Spenser, calls variations of surrounding area codes plus the number and when he finally gets a connection he is instructed to go to a meeting set up at a motel. So what does he do?

He leaves his wife and son and drives off in his highly conspicuous blue 1966 Chevrolet Corvette, with a half million bucks without any backup to the meeting, implausibility number 1.

At the motel he is robbed by two women and instructed to meet a man named Gorman Lennox at a restaurant. FBI agent Greg Meeker intercepts Dolezal and informs him that Spenser was an undercover agent, an FBI mule carrying money for a payment. Since Dolezal has carelessly lost the money, Meeker tells Dolezal to posing as Spenser to recover the money or help arrest Lennox.

Dolezal meets Lennox (Rourke in a "That's one fine coat you're wearing" long coat) and his deal broker Lane Bodine. Since Lane knew Spencer she knows that Dolezal is an imposter, but since she gets a percentage of the deal she lets him slide implausibility number 2.

The money is for illegal arms. Needing more money when the arms merchants renege on the original deal, Dolezal has to romance Lane so she will attract rich humanitarian donors to fund the increase asking price on the deal implausibility number 3.

Willem Dafoe puts in a good performance but there is a lot of hesitation evident in which way the director wanted to go. M. Emmet Walsh's character is built up nicely then disappears entirely from the rest of the film, Dolezal's wife and son are treated likewise. Later two apparent lesbian goons assault Dolezal in a motel room then also are never really part of the film except as background. There are a lot of dead ends. Expectations are dangled in front of us but never followed through. White Sands, New Mexico, BTW, makes a very brief appearance in the last 5 minutes, what's up
with that?

It probably would have worked better if it would stayed a bit simpler. The sum is not as good as it's parts, there was a good film in there someplace. 6.5/10