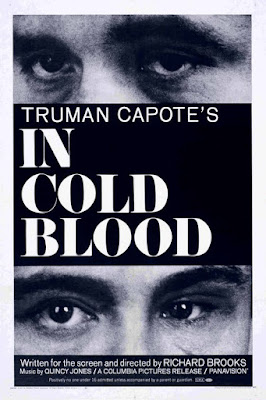 You'll know it when you see it. Just like you know a Noir when you see it. In Cold Blood is a Masterpiece and it's a Masterpiece of Film Noir, to boot, no doubt about it. It was made right at the end of Black & White film production and that format, along with the Classic Noir look/aesthetic couldn't have gone out with a bigger or more powerful bang.

The film has a plethora of Classic Film Noir veterans, John Forsythe (The Captive City (1952), The Glass Web (1953), ) as Alvin Dewey the lead investigator for the Kansas Bureau of Investigation (KBI).


In Cold Blood is both intensely horrific and starkly beautiful at the same time. The incredibly random violence visited upon a Kansas family triggered by an off hand remark to Dick Hickok from a prison cell mate, should send shivers down your spine. The film is an electrifying reenactment (in the actual locations) of the brutal murder of the Clutter Family near the town of Holcomb, Kansas on November 14, 1959, the subsequent six week flight of Perry Smith and Dick Hickock to Mexico, and their final track down by law enforcement in Las Vegas.

The film is stylistically nonlinear in format and there are multiple time jumps and flashbacks to Perry's and Dick's past, giving you quasi insights as to the why. There are occasional daydreams and escapist sunken pirate treasure fantasies that sometimes just add to the mystery and other times add to the explanation of what tipped the incident into brutal hideous murder in cold blood.

An interesting take away from the film is that neither Perry or Dick by themselves singly would have committed the murders, but together they formed a third sort of super personality that fed off the weaknesses of both of them and canceled any inhibitions they may have had.

It's not until the trip with the two fugitives back towards Holcomb do we get to hear Perry's confession with a flashback that reconstructs the fatal events of the night. What we don't see is actually far more suggestively appalling in Brook's skilled direction. The isolated farmhouse. A howling prairie wind. A foreboding interior darkness stabbed crazily about by erratic flashlight beams. Pleas for mercy cut off by gun blasts. Muzzle flash, juxtaposed with eerie silences. The actual massacre of innocents is solely in your imagination.

Perry Smith: It doesn't make sense. I mean what happened. It had nothing to do with the Clutters. They never hurt me. They just happened to be there. I thought Mr. Clutter was a very nice gentleman... I thought so right up to the time I cut his throat.

The film takes you along with the marauders on their getaway in their 1949 Pontiac Chieftain, excellently weaving their backstories with the various objects, encounters, and incidents that trigger the aforementioned revealing flashbacks. It's almost jarring upon reflection in the way that we get to know, and on some level, even feel some sympathy for the killers. Traditional Hollywood would have either painted these two murderers all in basic black or glamorized them, but Brooks shows us that despite their having no moral compass, there is still some modicum of humanity even in these two deplorables.

I can't emphasize enough the powerful performances of Robert Blake and Scott Wilson, they make these two sleazeballs BONAFIDE. Combined that with the vivid realism of the direction, the artistry of the cinematography, and the score from Quincey Jones and you have a film for the ages. This is undoubtedly Robert Blake's best performance, and I was also deeply impressed with the supporting work of Charles McGraw as Perry's grizzled, broken down and out, cowboy father Tex, living in what looks like the back of derelict box truck, outfitted with a bed pallet, a hot plate, wrangler gear, festooned with rodeo posters, horse blankets, and lit by kerosene lanterns, setting in a auto junk yard.

The film was nominated for four Academy Awards: Director, Original Score, Cinematography, and Adapted Screenplay. It should have nominated Blake and McGraw also, and it should have won all of them. Screencaps are from the Columbia Pictures DVD 2003. It's chilling 10/10.
.
Posted by cigar joe at 5:58 PM