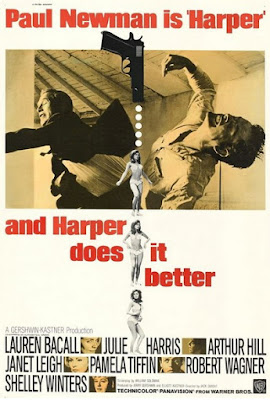 Ross Macdonald is the main pseudonym that was used by the American-Canadian writer of crime fiction Kenneth Millar (December 13, 1915 – July 11, 1983). He is best known for his series of hardboiled novels set in Southern California and featuring private detective Lew Archer.

Harper was the adaptation of Ross Macdonald's first Archer novel "The Moving Target" published in 1949. The film was directed by Jack Smight (The Twilight Zone (TV Series), Naked City (TV Series), The Alfred Hitchcock Hour (TV Series)), and was adapted for the screen by novelist William Goldman (No Way to Treat a Lady (1968)). Cinematography was by Conrad L. Hall (The Outer Limits (TV Series)).

“I tried smiling to encourage myself.  I was a good Joe after all.  Consorter with roughnecks, tarts, hard cases and easy marks; private eye at the keyhole of illicit bedrooms; informer to jealousy, rat behind the walls, hired gun to anybody with fifty dollars a day; but a good Joe after all.  The wrinkles formed at the corner of my eyes, the wings of my nose; the lips drew back from the teeth, but there was no smile.  All I got was a lean famished look like a coyote’s sneer.  The face had seen too many bars, too many rundown hotels and crummy love nests, too many courtrooms and prisons, postmortems and police lineups, too many nerve endings showing like tortured worms.  If I found the face on a stranger, I wouldn’t trust it.”

This film is in the Classic Hollywood style of P.I. flicks, Newman's Harper is almost in the same mold as Sam Spade, and Philip Marlowe. Harper has that same quality of wisecracking cool, that's essential for your classic P.I. Though Harper doesn't drink a lot or smoke, he's more of a habitual gum chewer, the various ways he disposes of his wads are good for a few chuckles.

One of the classiest parts of Harper is the opening credit sequence which depicts Harper as a less than successful private eye living in a combo office/crash pad. He's got a desk, a convertible sofa bed, a small fridge, a hot plate and an adjoining bathroom with toilet, sink, and shower. He wakes up, soaks his head in ice water, and boils water to make coffee, only to find he's out of coffee, so he snatches up yesterday's filter paper and used grounds out of the trash. Café avec des ordures, Starbucks it ain't.

Harper is on his way to a gig laid on him by his shyster pal Albert Graves (Hill). The client is Elaine Sampson (Bacall) a rich bitch whose husband is missing. Rounding out the household is Miranda Sampson (Tiffin) the hottie daughter who we first see jiggling about in a skimpy bikini, and Allan Taggert (Wagner) the family's private pilot.

When Harper first meets Elaine the dialog in the film pokes a bit of fun at the genre.

Elaine is concerned because when Ralph Sampson gets drunk he does silly things the latest is giving away a mountain top to a dubious looney holy man (Martin).

Elaine Sampson: Los Angeles is the big leagues for religious nuts.
Lew Harper: That's because there's nothing to do at night.

Sampson disappeared from the airport after calling a hotel to send a limousine for him. When Harper checks out Sampson's hotel bungalo he finds a bedroom festooned in Zodiac signs and a photo of a Hollywood starlet Fay Estabrook (Winters).  From Taggart Harper finds out that she is now a fat alcoholic who has regular hangouts.

Harper gets Fay drunk to pump her about Sampson. He takes her home and she passes out. Her phone rings and Harper answers. The caller, Betty (Harris), initially assumes him to be Troy (Webber) Fay's husband. Betty tells him that Fay was seen with a stranger, meaning Harper,  and that they need to be careful "when the truck goes through."

Harper now tracks down Betty, a jazz pianist, sometime recording artist, now a geezer lounge singer on the spike. Harper grills her about Sampson but when he mentions her fresh tracks she freaks signaling Puddler (Jenson) who sucker punches Harper and drags him from the club. Harper is rescued by Taggart.

The plot is very convoluted but not confusing. It's got quite a few Classic Noir actors to provide some cinematic memory. If the film has one fault it's that it doesn't quite go Noir enough. Looking back Harper is a little too old fashioned for its own good, it's got a classic Hollywood score by Johnny Mandel that's too flaccid for the material, it's honestly a bit of a snoozefest. There are also a few segments that feature what's supposed to be rock bands with folks dancing to what sounds like your typical generic hollywood hip gogo elevator music track, completely disregarding what instruments are being played on screen. This is a case where I'm spoiled by today's easy use of the real recording artists of the time used in period films.

The music also, is more reminiscent of what you would hear in that time periods comedies, so that, along with the presence of Robert Wagner just back from his signature The Pink Panther performance gives the film a bit of an off genre vibe. Had Wagner built upon his bad boy persona from his noir debut in A Kiss Before Dying with similar hardboiled fare, it may have been different. There are also some lite comedy sequences between Harper and his estranged wife Susan (Leigh).

Combine all of the above with the ambiguous ending and Harper is at best soft boiled and noir lite. Screencaps are from the Warner Brothers DVD. 7/10