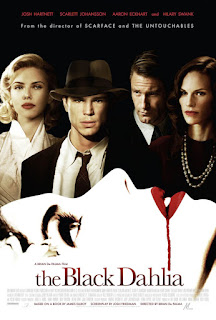 First off, I've read all of Ellroy's "L.A. Quartet' but It's been so long ago since I've read "The Black Dahlia", I barely remember the plot. What I do remember is that the tale wasn't about the Black Dahlia case per se but it was about the relationship between officers Dwight 'Bucky' Bleichert (Hartnett) and Lee Blanchard (Eckart). So basically I'm saying I came at this with a clean slate. It took me about three full sittings to really appreciate the film. I've read that De Palma had to trim the story by about an hour, don't know if that's true but it does seem a tad bit rushed at the end.

Anyway, officers Bleichert and Blanchard have known each other since L.A.'s Zoot Suit Riots. They are partners and also boxers, Blanchard is sort of a semi-pro, Bleichert was ranked 7th in Ring Magazine in some up and coming article. For an upcoming vote on a bond proposal for new equipment and a pay raise, the L.A.P.D. brass wants to stage a match between them build it up as Fire (Blanchard) against Ice (Bleichert), the proceeds go to charity, the L.A.P.D. gets some good press.


The story revolves about the relationship between Kay Lake (Johansson) and Blanchard, which becomes a triangle when Bleichert enters the picture. At the police training gym Bleichert casually asks Kay something to the effect of, that shaking together with Blanchard "will cost him a stripe, where are the diamonds and the bassinet?" Kay knowing exactly what she is doing, answers directly, with one of those WTF statements women are noted for, "well you'd have to sleep together for that, Dwight". Dwight is slightly stunned, information overload and you can see the wheels turning in his head and the lust rising in his libido.


The big fight goes down and so does Bleichert with his top front teeth knocked out. The bond passes and Bleichert and Blanchard are assigned to warrants.

While on the early morning stakeout of a "fuck pad" on January 15th, 1947, waiting to pick up an Okie shit kicker named Jr. Nash, Bucky and Lee get into a shootout with Nash and a black pimp's gang. Nash is killed along with a whore and a few of the pimp's gang members.

Meanwhile, nearby, a rising crane shot reveals that out back, along a frontage road, a lady pushing a baby carriage who comes upon a grizzly sight. A woman's nude body, cut in half. The woman has grotesque cuts to both sides of her mouth, and her internal organs removed. The press has a field day soon dubbing the murder "The Black Dahlia" a take on "The Blue Dahlia" a popular noir film recently released.

The woman is identified as Elizabeth "Betty" Short. Lee soon becomes obsessed with the murder (we later find out from Kay that Lee's own sister was killed and the murderer never caught). The sexual tension between Kay and Bucky escalate, with Kay teasing Bucky with peek-a-boo flashes.


Bucky pursues his own leads and soon discovers that Betty was doing screen tests and eventually starred in a stag film. Betty was also cadging drinks from lesbians at a nightclub. Bucky follows that lead to the nightclub and there meets the original Black Dahlia Madeleine Linscott (Hilary Swank). Madeleine is channeling Katharine Hepburn, and she does it convincingly. Madeleine is getting her kicks as a amateur hooker, parading herself along the boulevards turning hetero tricks, and cruising the lezbo bars. She uses the Red Arrow Inn as her hot sheet motel. Madeleine comes from one of the founding L.A. Families. She tells Bucky that she and Betty were very close, and that she will do anything to keep her name out of the papers. Bucky being a normal all American male takes her up on her offer.

Straight out of an even more warped Raymond Chandler "The Big Sleep" Sternwood Family type of scenario we get to meet the Linscott's. Emmett (Kavanagh), Madeleine's Father is a sleazy looking slightly zany housing czar who built L.A. firetrap subdivisions out of cheap used and rotting movie prop lumber. Ramona (Shaw), Madeleine's decaying mother is an old money heiress who is also a snobbish drunk. She rails against the lowlifes, hillbillies and Okies moving into L.A. Martha Linscott (Rachel Miner) seems to be the only truly sane member of the family but after meeting the rest of the loonies you expect her to be sniffing ether and posing for beaver shots for a porno mag a la "The Big Sleep."


Bucky finds out from Kay that Lee took off after a tip about a recently released convict, Bobby DeWitt. Bucky heads out to the location and confronts DeWitt in the atrium of the building. DeWitt is Blasted by Lee, who inturn is garotted by a man who comes up behind him. Lee fights with his attacker but has his throat slashed by a dark figure. Both Lee and his attacker fall down the atrium to their deaths.

Lee's death short fuses the Buck/Kay attraction and they make it explosively on the dining room table. The morning after Bucky accidentally finds loot from a bank heist in Lee & Kay's bathroom, Kay confesses that she was Bobby DeWitt's gal, and that he pimped her out to his friends. It was Bobby who robbed the bank and that Lee had rescued Kay and stolen DeWitt's swag. Lee had to bump off DeWitt before he spilled the beans. Lee splits pissed off that Kay would not have told him any of this until he found the cash. He heads back to Madeline and her kinky needs.

Bucky keeps assembling clues and soon it all descends down into a deviant Noirsville.

The Black Dahlia was an ambitious film, it looks great but the convoluted plot isn't for lightweights, it took me three watches to understand it all, there's a lot coming at you at once, perhaps it was more user friendly in the director's cut. It has other problems. De Palma should have gone the tried and true proven route of casting some lead actors with some better noir credentials. We get Harnett, Johanssen, and Eckart, all cold turkey to noir, but with repeated views they blend in enough. Only Hillary Swank pulls off her character convincingly from the get go, and her performance is aided by the cinematic memory of Katherine Hepburn. Her slutty Hepburn is a treat. The rest of the Linscott family is hilariously looney. The Linscott family tree has got serious heart rot. A shout out to Mia Kirshner, as Betty, a bit more with her would have only improved the film.

De Palma went the Classic Noir route and that was probably a mistake, aside from the brief stag film sequence, it was almost back to the old Hays Code, Kay is even depicted in "granny panties" in one shot.  He should have went "bush" if he wanted to titillate and stay period. Noirs should always push the limits. The Black Dahlia is relatively tame in it's depiction of sexuality compared to say Dressed To Kill, so it probably disappointed some of his old fans and folks expecting a more daring film. The title also got negative reviews from those expecting a true crime story about the Dahlia case.

You almost have to approach these Neo Noirs from hindsight, there are a few gems and semi-precious jewels out there but they either got buried under the avalanche of whatever the popular genre trend was at the moment, or they stared relative (at the time) nobodies and fizzled in art house obscurity. It's only when looking at it as following a vein of Neo Noir can you discover and excavate them out.

Mark Isham's score is memorable and K.D. Lang's rendition of "Love For Sale" is the best I've heard. Not without flaws but entertaining. 7/10