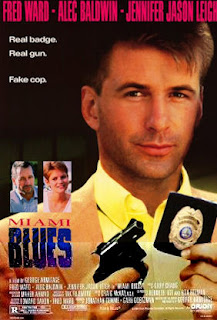 Director: George Armitage, written by Charles Willeford (novel), and George Armitage (screenplay). Miami Blues is the first film based on Willeford's series of novels featuring hard boiled detective Hoke Moseley. According to Lawrence Block "Quirky is the word that always comes to mind, Willeford wrote quirky books about quirky characters, and seems to have done so with a magnificent disregard for what anyone else thought."

Freddy asks for ID. Freddy tries to trade her the suitcase clothes. Slow on the uptake. Susy will do it for a suitcase dress. Easy to BS. Easy to string along. Just what Freddy needs, and she can cook too. A perfect pair. They get it on.

Freddy begins to roam Miami like a land shark, ever watchful for  easy marks, pulling small jobs, he watches a classic pickpocket team boost a wallet, follows the drop man to a men's room and sucker punches him.


Meanwhile back at the baggage claim crime scene the Detective Hoke Moseley and Sgt. Bill Henderson investigate the case of the dead disciple. Hoke is a rumpled, coarse, depressed boozer. He wears store bought teeth, is strapped for money and lives in rundown residence hotel. Deco decadence.

Rudimentary detective work, eyewitnesses, and following leads gets Moseley to Freddy. Freddy and Susie invite him to dinner. Moseley knows that Freddy broke the Krishna's finger, but he figures it was an accident, Freddy didn't mean to kill him and doesn't get too worked up about it. Freddy is wary and wants to blow Hoke away but gets second thoughts, and a better idea. He follows Moseley back to his fleabag. He knocks on his door and cold-cocks him when Hoke opens up. While Hoke is hearing the birdies chirp, Freddy steals his badge, gun, sap and teeth. It doesn't get lower than stealing his teeth.

Freddy now begins a career as a fake cop. He's cruising. Sharking the drags. Freelancing. Bracin' crooks. Routing lowlifes. Shakin' down con artists. Out thievin' thieves. Flashing his badge he metes out vigilante justice. He drops his calling cards all around town. He leaves two drug dealers handcuffed to a garbage can with Hoke's handcuffs. He goes back to Pedro and finds out who is getting the skim from the hotel prostitution racket. It's Sgt. Frank Lackley. Freddy braces Pedro and tells him he's now splitting that skim with Detective Hoke Moseley and gives him Moseley's Primrose Hotel address. Lackley goes after the unsuspecting Hoke.

Getting more out of control and upping the volume Freddy begins to gundown goons gratuitously. He dispenses dirt naps. Low wattage Susie finally begins to see that she is shackin' with trouble. It all goes South to Noirsville when Freddy uses Susie as a wheelman for a pawnshop robbery.

Baldwin plays the quick to take advantage ex-con with bravado. His intense bright blues spotlighting a hair trigger sociopath tendency. Ward is great as the laid back Hoke, but you wish he had even more screen time to develop his character. Leigh is adequate as the hooker with a heart of gold, she may fit somebody's idea or type of hot but to me she seems almost too plain jane and a bit retarded. She does effectively convey the storybook girl who hopes her prince charming will rescue her from a life of going down on losers.

For me Armitage made the mistake of spending too much time on the Freddy-Susie relationship and that robs us from getting more of Hoke Moseley who should have been the main star. Music by Gary Chang. 7/10