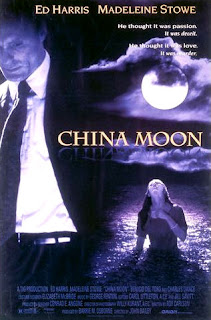 The film starts with a sequence of an illicit tryst at the Calypso Heaven Motel between Rupert and one of his bank employees Adel (Healy). The two are caught by a peeper on camera.

We segue into a crime scene. Low rent neighborhood. A woman has been murdered. Two homicide detectives Bodine and a very Hispanic looking Lamar Dickey (Del Toro) arrive to investigate. Bodine is the lead detective, Dickey appears to be still somewhat in training. Bodine is efficient, smart, and deduces the situation within minutes.

We do the followup to the coroner's. Après autopsy Bodine and Dickey wind down to the Blues at JJ's Lounge. Beer & Blues. Kyle kicks back. Lamar gets loose. Kyle is kind of shy around women. He's a lonely man, strong but vulnerable. Beer and nature takes it's course and Kyle gets a wandering eye. He oogles ravishing Rachel. Rachel gives him the hook look. Kyle is smitten. Kyle takes the bait. Kyle is love sick.

Rachel plays hard to get. Kyle comes on strong. Rachel has to split, mission accomplished. Kyle can be played.

The photos of Rupert's hot sheet motel shenanigans eventually make their way into Rachel's hands. At this point we assume that Rachel has hired a PI to get the dirt on Rupert. Their marriage is disintegrating fast. Bodine and Dickey catch a domestic violence squeal to Rachel and Rupert's house. Rachel's nose is bloodied, it sets the stage for what is to come.

Of course it all goes Noirsville in a predictable manner but with some interesting twists along the way that are admittedly filmed beautifully.

Ed Harris is good as the sympatico Kyle Bodine. Madeleine Stowe treads familiar femme fatale territory she has a slight Elizabeth Taylor vibe going for her. Benicio Del Toro though is a bit miscast as Dickey, and his portrayal seems a bit uneven. He goes from a bit of a fumbler on the first case depicted to a seasoned expert when he, all of a sudden out of left field, takes the lead on the Munro murder investigation.Even if it's depicted the way it is to convey that Dickey is just playing dumb, it is not convincing.  It's a bit of a jar. It is either the fault of the screenplay or that of the director. The ending also seems both rushed and flawed, and  it's too syrupy too sweet.

China Moon is worth a view,  it's a good primer on how a neo noir ought to at least look, but it's not an essential, it's like a "B" grade Neo.   Watch for Anson Funderburgh and the Rockets featuring Sam Myers during the JJ's Lounge sequence. Screencaps are from the MGM DVD. 6.5-7/10.