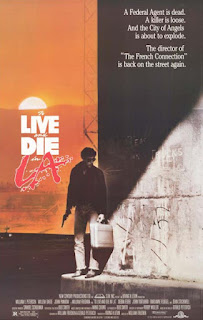 (On a personal sidebar, in the late 60's early 70's, I lived in New York City and used to commute back and forth into Manhattan from Queens by elevated subway. I can vividly remember standing on the Queensboro Plaza station and watching the unearthly crazy colored polluted sunsets I saw over the Manhattan skyline violet, sea greens, fuschia, and pink.) 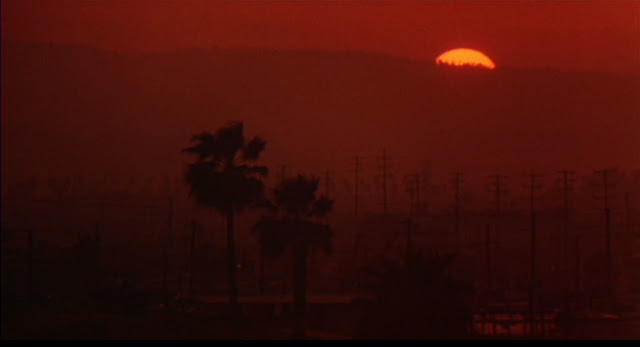 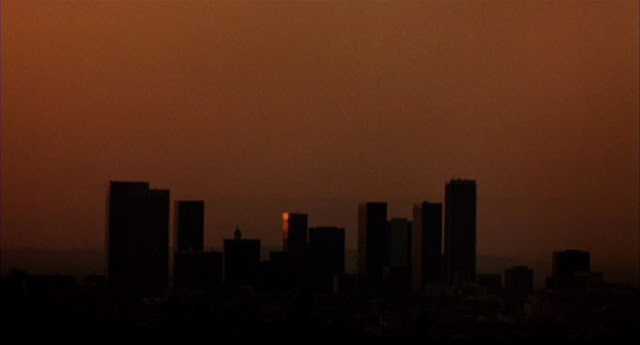 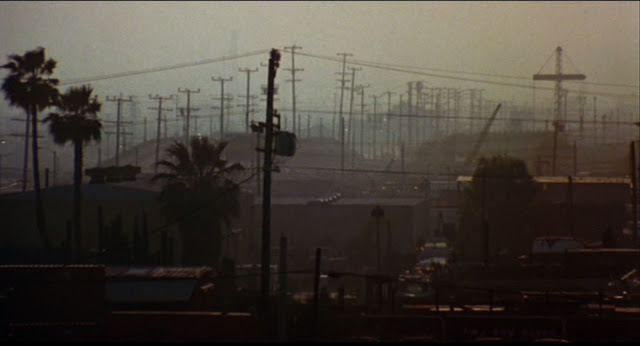 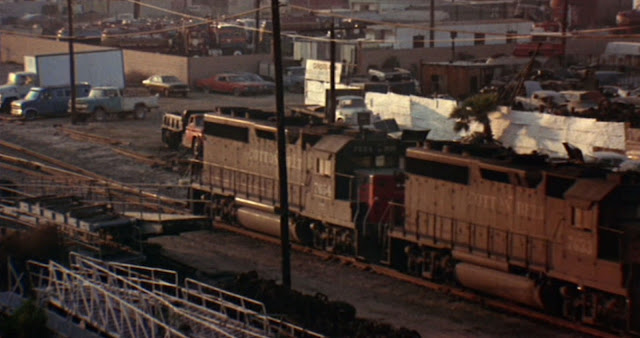 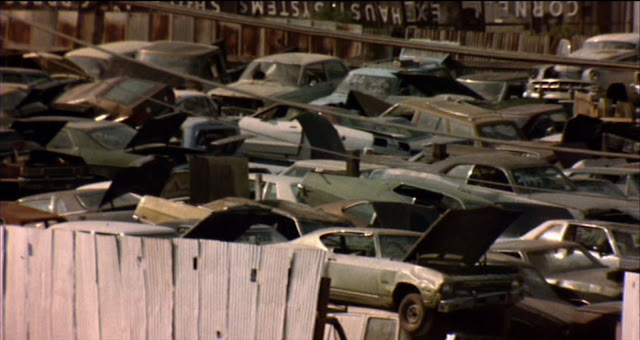 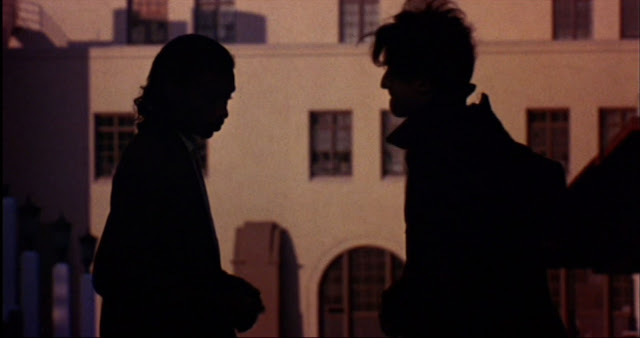 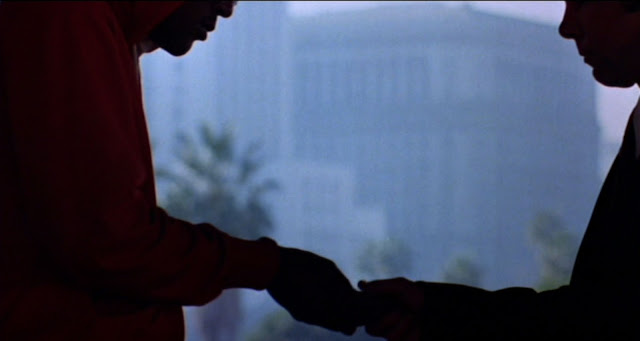 The tale is about three US Secret Service Agents who are headquartered in L.A. When not providing security for a visiting POTUS (President of the United States) they do field investigation work for the US Treasury, targeting counterfeiters.


Richard Chance (Petersen) and Jim Hart (Greene) are top notch agents. Chance the cock of the walk, is a bit reckless, a bit overconfident, a bit of a jock, a bit shady, he even shacks up in a "safe house" with a stripper Ruth Lanier (Darlanne Fluegel) that he uses as a "stoolie with benefits". He holds her probation and the ability to see her daughter as leverage.

Agent Hart is the veteran, steadfast, partner who is almost a father figure to Chance.


Chance and Hart have just busted up an assassination attempt on President Reagan. The stress of the details are getting too much for Hart who is soon going to retire and go fishing. Chance unwinds by bungee jumping off the Vincent Thomas Bridge over L.A. Harbor (though in the film he calls it B.A.S.E. jumping). A day after Hart's retirement party at the Dog Run Bar, and with only a few days left on the clock, Hart heads off on one last surveillance assignment. He drives out into the desert to check on a warehouse suspected of housing counterfeiting equipment. With binoculars he checks out the site belonging to counterfeiter Rick Masters (Dafoe).

Hart, thinking the site is deserted approaches and jumps the fence. He starts to poke around and finds a trash bag full of cropped currancy paper in a dumpster. Masters and Jack, his bodyguard, surprize and kill Hart. Leading a team of agents to Masters desert warehouse Chance discovers a pool of blood soaking into the dirt from Hart's body lying in the dumpster.


Chance gets assigned a stuffy new partner John Vukovich (Pankow), a no nonsense by the book professional. Chance tells John that he is making taking down Masters a personal vendetta.

The two new partners begin putting the screws to Masters. They start by setting up a tag team surveillance post in a church across from attorney Max Waxman a well known shady shyster associate of Masters. During Vukovich's turn on watch he falls asleep, Masters shows up and whacks Waxman.


Arriving at the unsecured crime scene Chance takes a notebook belonging to Waxman, which is apparently a payoff record. Vukovich tell's Chance that he's tampering with evidence but later back at headquarters the two come to an uneasy truce. Vukovich says he won't rat him out, but the agents now work two different angles. Chance uses the coded payoff book and his relationship with Ruth to get the inside skinny on underworld transactions. Vulkovich on the other hand arranges a meeting with Masters private attorney Bob Grimes (Dean Stockwell) in a downtown L.A. bar. 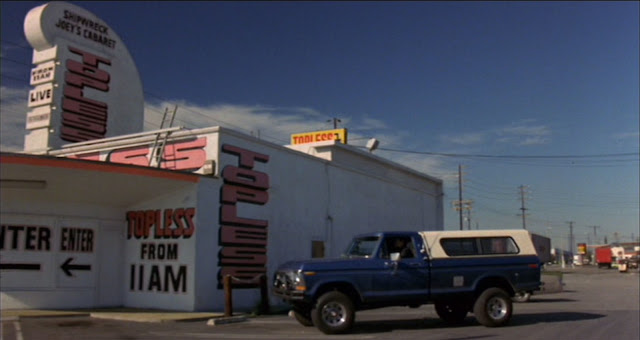 Grimes, agrees to set up a meeting between Masters and the two agents. The agents will pose as bankers from Palm Springs interested in Masters' counterfeiting services. Masters is reluctant to work with them, but ultimately agrees to print them a million worth of fake bills for $50,000. The problem is that the Treasury Department only allows payouts of $30,000. From Ruth, Chance gets the skinny that a money deal is going down and that a bag-man is coming by Amtrak from San Francisco. He tells Vukovich that they are going to steal it.

Unfortunately, the info is wrong the bag-man Thomas Ling is in reality an undercover FBI agent on a sting operation, after Chance and Vukovich abduct him they drive him to the rail yards along the Los Angeles River. There they break open the suitcase only to find a phone book. Chance knows hes carrying and finds that he has a money belt, the FBI agents that are shadowing him accidently kill Ling after a freak accident while they are trying to save him.


Chance and Vukovich not knowing what's coming down run for their car and they try to evade a swarm of FBI men. What follows is one of the greatest car chases on film easily equal to those in Bullitt (1968), The French Connection (1971), The Seven-Ups (1973), and it's also an homage the car chase after Charles McGraw in the L.A. River in the Classic Film Noir Roadblock (1951).

By luck Chance and Vukovich manage to evade their pursuers. At their daily Treasury Dept. briefing they are read an FBI bulletin that reveals that Ling and FBI agent was kidnapped, robbed, and killed by two unidentified men driving a cream colored car. Vukovich becomes guilt ridden, but Chance is still focused on getting Masters. Vukovich concerned with saving his own skin goes back to sleazeball attorney Bob Grimes, who advises to turn himself in and rat on Chance. Vukovich refuses that advice.

Chance and Vukovich meet Masters for the the money exchange. The agents attempt to arrest Masters when they get the evidence but Jack Pulls a shotgun and in an exchange of fire both Chance and Jack are killed. Masters escapes in the mayhem and Vukovich is stunned by his partners death.

The film has a 80's techno Wang Chung pounding beat. The cast at that time (save for Dean Stockwell) where pretty much all unknowns. The mayhem ratchets up nicely and unpredictably throughout the film. It's and anti buddy cop film.

The Noir ending, has the now jaded Vukovich visiting Ruth as she's packing up to get the hell out of Dodge.  He knows Chance gave her ten G's as her cut. Ruth used it to pay off her debts. She's his bitch now. 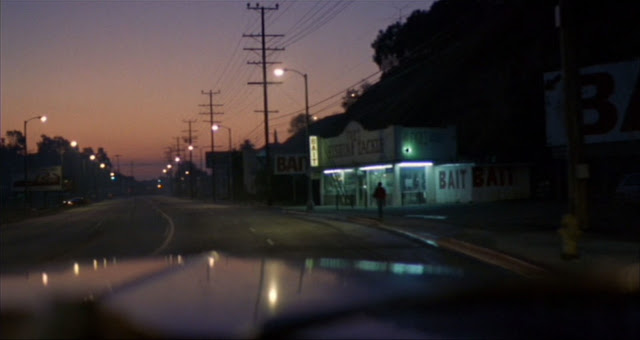 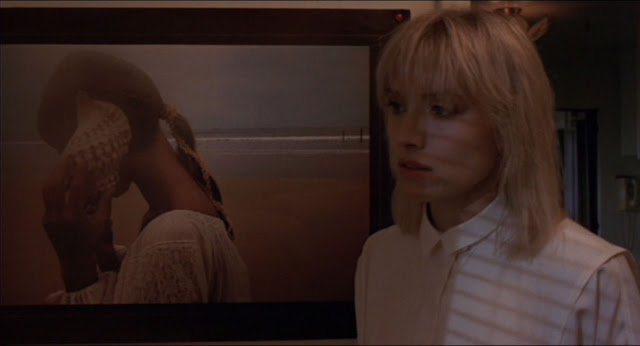 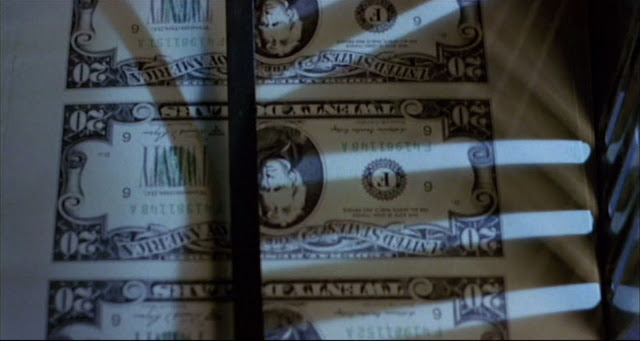 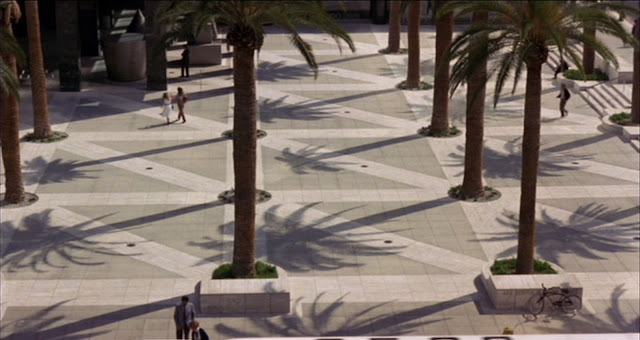 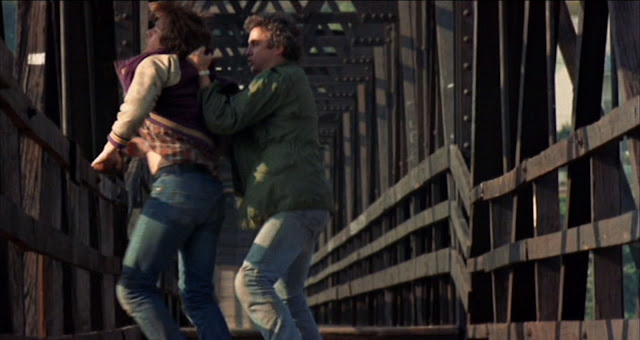 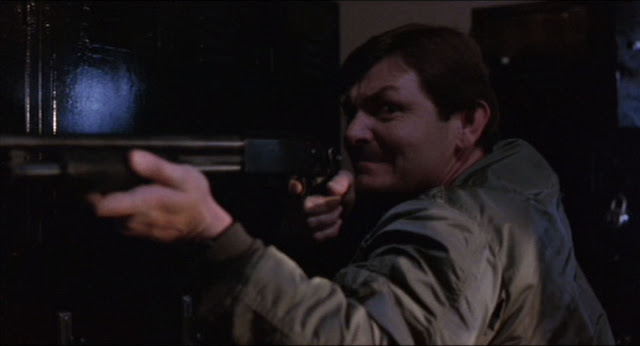 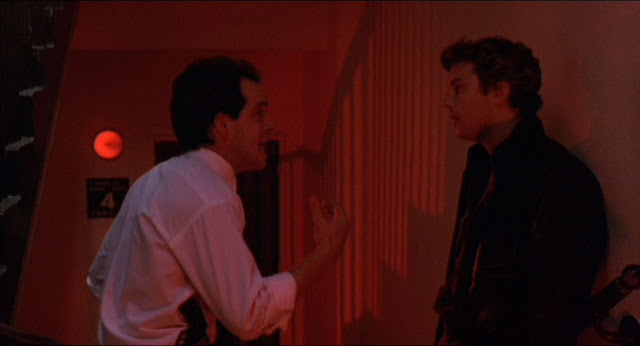 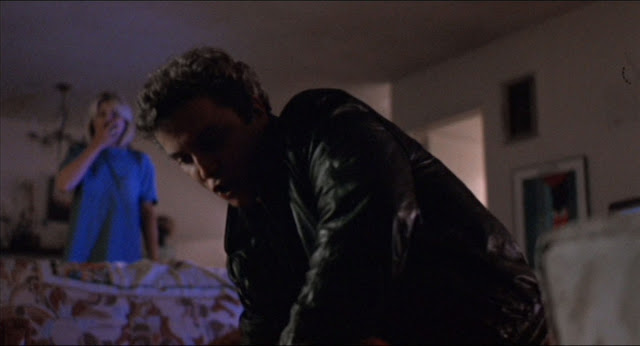 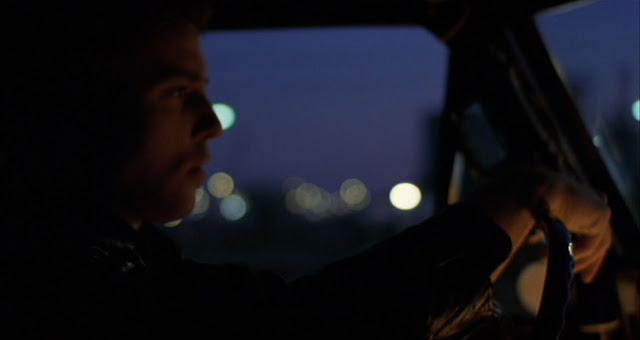 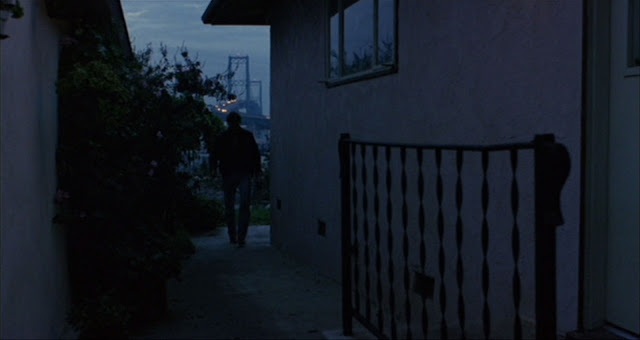 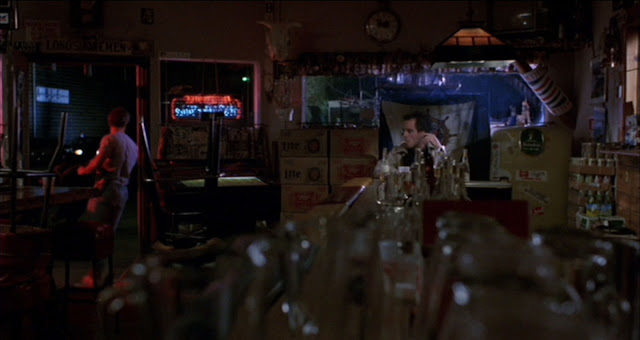 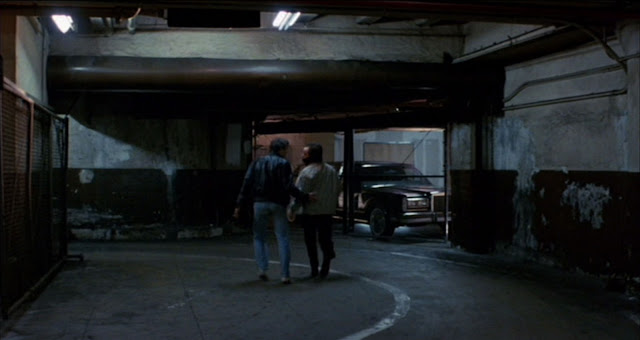 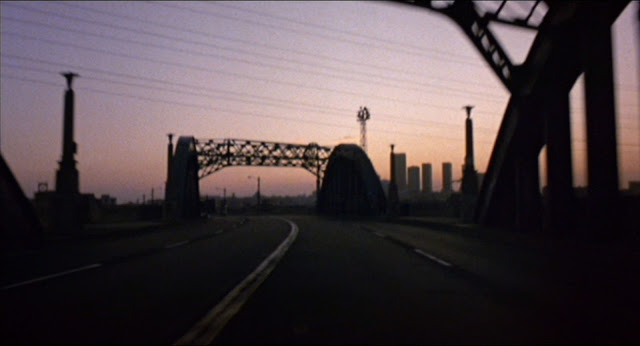 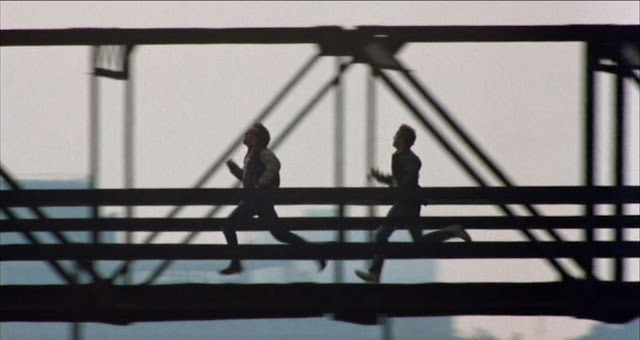 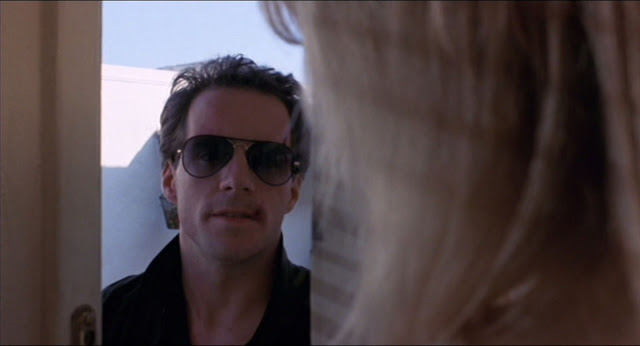 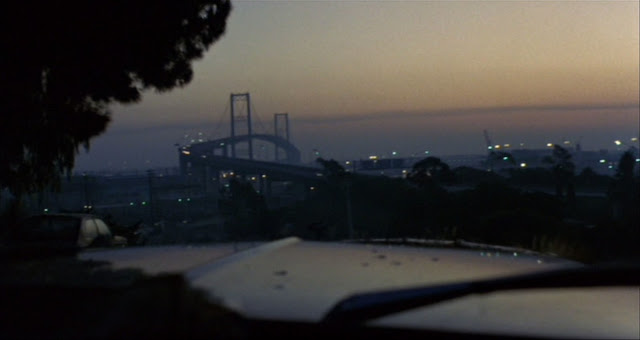