拳銃は俺のパスポートaka - A Colt is My Passport (1967) Japanese Yakuza Noir

"We've been in fixes like this before, and we've gotten out every time." (Shuji Kamimura)

Writen by Hideichi Nagahara and Nobuo Yamada and based on the novel by Shinji Fujiwara. The Cinematography by Shigeyoshi Mine, Music by Harumi Ibe.

A Spaghetti Western- ish, guitar, base, and whistling soundtrack by Harumi Ibe accompanies the titles. The tale reflects both French New Wave and the popularity of the Italian/Euro Westerns on world cinema which really caught fire after Sergio Leone took Akira Kurosawa's Yojimbo, the story of a ronin who played both factions of a town's criminal element against themselves and reimagined it as A Fistful of Dollars. In this story Takashi Nomura takes Leone's tale about rival bounty hunters in For A Few Dollars More and uses its old pro/new pro dynamics in his story about a professional hit man Kamimura and his understudy Shun. You can also see elements of Yojimbo and A Fistful of Dollars i.e. the Nui/Maria story in the barge/waitress/cleaning girl Mina sidebar.

Kamimura is hired by the Senzaki yakuza clan to assassinate rival boss Shimazu before he leaves Japan in 24 hours to broker a new deal with foreign crime syndicates. The minion gives Kamimura half his fee in advance plus passports and airline tickets for himself and Shun. Shun is Kamimura's protege who does research. and prep work.

Shun gives Kamimura a breakdown tour of Shimazu's daily routine. He brings him to all the likely hit spots detailing the negatives of each location i.e. The route he travels is in a heavily armored 1960 Dodge Dart Phoenix limousine with bulletproof glass. An exposed skyscraper office also, is  protected with bullet proof glass.

Shun has their 1965 Datsun Bluebird getaway car engine souped up and instructs the mechanic to add a second brake pedal behind the front seat. It's concealed beneath a floor mat.

The only deviation in Shimazu's daily routine is when he meets the next day with Senzaki at his home before his trip. Kamimura takes advantage of that, by posing as a man wishing to rent an apartment overlooking the backyard meeting place.

The from a window using a high powered rifle with a scope and silencer he whacks Shimazu and his bodyguard right in front of Senzaki, to Senzaki's chagrin. While an ambulance and police converge on Senzaki's, Kamimura and Shun make a clean getaway. Senzaki and his crew are hauled off to the police station.

Kamimura and Shun head to a bank and as pre arranged to  pick up the rest of the hit money. They stop at an auto salvage yard to dispose of the rifle in a car about to be crushed, then head to the airport to catch their Air France flight.

At the airport, in a bar/lounge they are captured by Shimazu's men who have been staking out all the departing flights. Shimazu's men put Kamimura and Shun into the back seat of their Datsun Bluebird.

The man in the passenger seat leans over the backrest holding a gun on Kamimura and Shun, while the driver heads off at high speed towards Shimazu's headquarters. When he gets a chance, Shun signals to Kamimura and Shun steps on the brakes hard sending the two of Shimazu's men smacking violently into the windshield breaking their necks.

Kamimura and Shun dispose of the bodies by driving the Bluebird off the end of a wharf. They then call their contact man Senzaki's lieutenant Nozaki for new instructions. They are told to go to the truck stop and motel, called the Nagisakan in Yokohama.

Senzaki's men bribe Yokohama yakuza boss Tsugawa into helping them locate the hit men. Tsugawa tips them off. When the Senzaki hit men arrive, Mina the waitress/motel maid who has taken a shine to Kamimura is able to warn them in time. They escape out a back entrance way and bribe a departing truck driver to give the a lift to another motel.

There at the new motel they get new instructions to catch the ship's tender/water taxi that visits all the ships anchored off shore. With that they can get aboard the next freighter leaving the port.

Another ambush is arranged at the boat launch by the Shimazu gang from more information dropped by Tsugawa. Kamimura and Shun "borrow" a truck to get to the rendezvous and when they get fired upon by the assassin they run him over and knock him and his car into the harbor.

Kamimura and Shun then head back to the Nagisakan Truck Stop.  However now the three gangs Senzaki, Shimazu, and Tsugawa have now formed a truce and eliminating Kamimura and Shun is part of the deal. Mina tells Kamimura and Shun that she grew up in a barge family and she can get a barge captain to take them out to a freighter and away from Yokohama.

It all goes Noirsville when Mina returns to the motel to find Shun captured by the new united yakuza gang. Kamimura proposes an exchange. He will meet the gangs for a showdown at the landfill at 7:00 AM tomorrow as soon as they put Mina and Shun on the departing freighter today.

The film is well made with an exciting climax. It's an interesting mashup that works. If you've never seen it you are in for a treat.  A fun watch, 8/10. 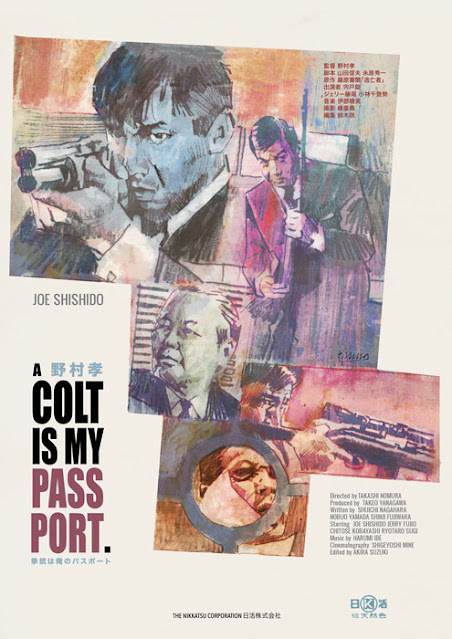