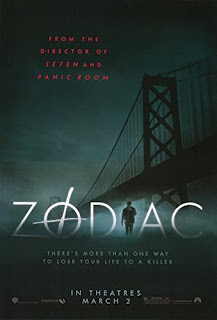 Zodiac is a great Neo Noir.

Zodiac was directed by David Fincher, of his films I've liked Se7en (1995), and the fantasy The Curious Case of Benjamin Button (2008), didn't care that much story-wise for Gone Girl, The Girl with the Dragon Tattoo, or The Social Network. From those last three listed choices of films that he made, they don't particularly give me the confidence to attend one of his films on the basis of his name alone being connected with the project. With director names like the Coen Brothers, Tarantino, or Lynch, I'll pretty much do a blind buy in, its a good bet I'll know what I'm getting.

It sort of makes me long for the old Hollywood Studio system, at least the part where, say a good director of Crime Films or Westerns would be able to carve out a nice Genre niche and perfect his style and ideas over a series of films. Se7en and Zodiac were great Police Procedural Noirs, I wish he'd make more of them, he made great ones.

Zodiac was written by James Vanderbuilt and was based on Robert Graysmith's eponymous book. Robert was a political cartoonist for the San Francisco Chronicle. In 1969 when the Zodiac killer case broke, he attempted to decode the four cryptograms sent to the paper and in turn became obsessed with the case. He wrote two books about the Zodiac and five other pieces on other crimes. One of those was made into the film  Auto Focus (2002).

It's Fincher's style, the cinematography of Harris Savides, the dietetic soundtracks, and the music by David Shire, that combine to suck you into the story.

It's more like an ensemble film. All the actors do a great job though none of them really stands out performance wise, though of course most time is spent with Gyllenhaal, Downey Jr., Ruffalo, Edwards and Sevigny. They all could have been replaced by other actors with no real change in the overall quality of the film. 9/10