Mickey Spillane's Mike Hammer (79 episodes, 1958-1959) starring Darren McGavin. This is the first TV series based on Mike Hammer. A TV Hammer movie starring Brian Keith aired in 1955. McGavin's Hammer has a pretty confrontational attitude, though it's a tongue-in-cheek Hammer, he's quick with his fists and his gun. Some of the episodes are quite Noirish. Its set reasonably within the right time frame parameters for Hammer (this is the late fifties), most of its establishing and location shots are Manhattan and the other Boroughs, though some exteriors and all the interiors were shot at Universal and Republic studios. These are in the Noir subcategory I like to call "Tail Fin" Noirs, for the very noticeable automobile styling element that dominates all the exterior sequences. 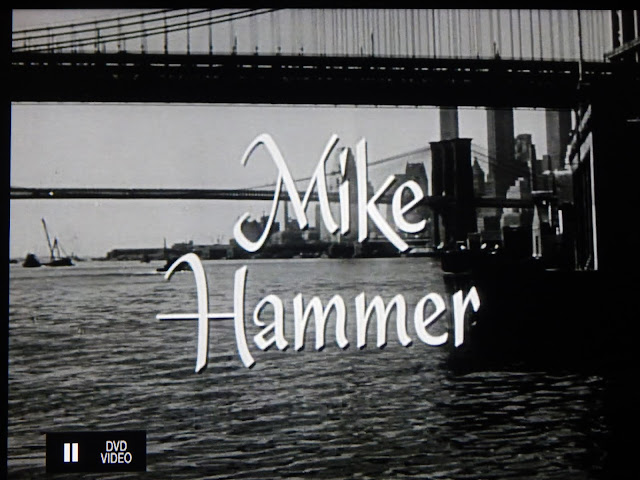 There's a few caveats however, its TV, it has a code just like the MPPC of Hollywood, the Hammer-tomically correct broads aren't going do much more than tease and forget about strip.
Another is that it's not Hammer neat. McGavin's Hammer as written is part Spillane's Hammer and part Kane's Johnny Liddle, Manhattan detective novels. This is a low rent Hammer who apparently has rooms at the Parkmore (residence) Hotel. The series is set in close to the correct time period for the first seven Spillane Hammer novels

More caveats are Runtime: 30 minutes, minus commercials and end credits, intro is short and within a minute you are into the story. The end credits have all the info running about 2 minutes the  episodes are probably actually around 26-7 minutes long. Aside from Hammer (McGavin), Pat Chambers (Bart Burns in 21 of 79 episodes), and coke bottle glasses wearing, candy store owner Geta (Vitto Scotti 7 episodes) there are not a whole lot of returning characters or (much character development over the span of the episodes.

Positives are McGavin is a good Hammer/Liddlle composite, though it is Spillane's character, this Hammer, does not have any over the top Gov/Commie story-lines or character rants that Spillane seemed to gravitate towards after I, The Jury was written. Frank Kane created the Manhattan based private eye Johnny Liddell. The teleplay writers had thirty books and countless short stories for reference and  Kane himself is credited with 23 episodes during the run. This may account for the realistic small realistic type cases feel of the show. There is no Velda, though she is mentioned a couple of times in the second episode.

For the short run times the stories move along with great economy and good use of McGavin's first person narration to bridge the set pieces. The NYC on location sequences feature McGavin walking the streets,  driving his 1957 Ford Fairlane 500 convertible around Manhattan, or hopping in taxis these give the show a nice Neo Realist feel.

All the babes are hammer-tomically correct. Occasionally there is some episodes with Noir-ish lighting and Dutch angels used. The majority of the sets have a nice sleazy look complimenting the stories. Lots of action, the episodes either feature fisticuffs (McGavin held a black belt in traditional Japanese karate). I've read that the show was notable for him doing many of his own stunts and for the "enthusiasm" he put into some of the fight scenes, sometimes forgetting to pull his punches and "ad-libbing" moves. Iy was also known for a lot of sudden and quick blazing gun fights in cramped quarters with the bad guys ending up dead. It has decent theme music, "Rift Blues."

Season One - Disc One