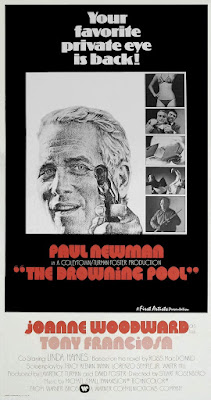 9 years after making Harper (1966), Paul Newman reprises his role of private eye Lew Harper in The Drowning Pool. The Harper character is based on Ross Macdonald's private eye Lew Archer who was based in the fictional town Santa Teresa (Santa Barbara) just North of L.A.

Anthony Franciosa (credited as Tony Franciosa) (A Face in the Crowd (1957), ) as Chief Broussard, Murray Hamilton (The Hustler (1961)), as Jay Hugh "The Crab" Kilbourne, and Gail Strickland as Mavis Kilbourne.

Too little too late. If Harper (1966) was the success the studio claimed it was, they should have put out another film out a year later, but oh wait, the studio era ended, film production was controlled by the studio heads anymore. We had to wait nine years for the next Harper/Archer film. Every year of delay more stars from the Classic Noir era who could have been used to bring a bit of cinematic memory/magic to a Neo Noir were lost.  Nowadays all kinds of repetitive superhero carapola gets greenlighted, buy the suits who want to franchise properties, just like, like, like, the old studio heads, BINGO! Too bad Noir fans, there wasn't this mentality for Film Noir. We have lots of material that's never been optioned and made into film. Not only for Ross Macdonald with 15 novels...

... still available to film, but also have the great  Raymond Chandler's Payback - 1958 and quite a few of the rest of the top hard boiled writers stories out there, that are a real treasure trove of material. Again too bad, the farther you get away from the era the novels were written the harder it is to adapt without committing to make it a period piece in the era the novel depicted, the idioms, the slang become archaic and meaningless over time. You also have the problem of finding actors who are believable denizens of your re creation.

Private detective Lew Harper of southern California, flies out to New Orleans on a case at the bequest of a Mrs. James Devereaux. When he meets Mrs. Devereux he is surprised to discover that she is actually a girlfriend named Iris with whom he had a voluptuous fling with in L.A. six years earlier. She reveals to Lew that she has been married for 17 years to James Devereaux, a closet homosexual "playwright" of unproduced plays, and they both live with their 17 year old daughter Schuyler, and his overbearing mother Olivia Devereux on the huge family plantation Rivage.

She has called Harper to investigate the appearance in the mail of a blackmail letter to James suggesting her infidelity with other men. Iris believes that the letter came from Pat Reavis the family chauffeur that Iris just recently fired. Complicating the family intrigue is wayward daughter Schuyler who tries to proposition Harper in his Rivage Townhouse Motel room. As soon as Harper arrives his presence starts to shake things up in the best noir/hardboiled tradition setting up a chain reaction right to Noirsville. He gets rousted by Chief Broussard and Lieutenant Franks of the Louisiana local cops. Buttonholed by local mobbed up oil tycoon Jay Hugh "Crab" Kilbourne who wants to "slant drill" him for information. And most importantly gets both touched and worried over his former lover Iris' quiet desperation in her crumbling antebellum alcoholic world.

The films real highlights are the scenes between Harper and Iris, there's a nice believable chemistry going on between Newman and Woodward, accompanied by a hauntingly beautiful arrangement of "Killing Me Softly" as Iris' leitmotif. Woodward's performance evokes in a good way just about every Tennessee Williams film  adaptations "femme se désintégrer". There is some humor also, when Lew suggest that she leave, Iris "born into the lace" (good blood no money) is accustomed to style, surveying about her opulent surroundings replies "and do what?" Newman's reaction is chuckle worthy.

The big set piece is the denouement at the old Evangeline Sanitarium's Hydrotherapy Room.