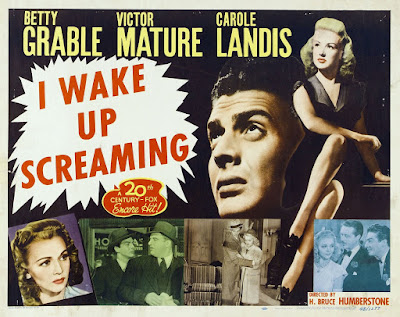 The biggest problem of some critics and chroniclers of Noir with the film I Wake Up Screaming is that they don't know how to categorize it. It doesn't fit the carefully crafted "German Expressionism" influence scenario that they have worked out as the origin of Noir. It's Director H. Bruce Humberstone, never made another Noir, it's brilliant cinematographer, Edward Cronjager, never filmed another Noir so conceptually and visually it's a one off, one of a kind.

I'm calling it a seminal "Gateway Noir" because the film serves the same purpose as a gateway drug, it functions as a sort of gateway to Noir for those unfamiliar, at that point in time, with what eventually came to be known stylistically, and hard boiled narratively, as Films Noir.

Look at the film in chronological context, only Stranger On The Third Floor (1940) approaches it in Noir visual stylistics, while The Maltese Falcon (1941) released only twenty eight days ahead of it on October 3, has the hard boiled story by Dashiell Hammett, but barely any of the signature visual stylistics. I Wake up Screaming not only was based on the hard boiled novel by Steve Fisher and also has the brilliant Noir stylistics in abundance but it has much much more. You can say that the film has dissociative identity, multiple genres if you will. It's also a bit of a Screwball Comedy, a Romantic Drama, and almost a Musical. This seamless genre bending provides the "gateway" for Comedy, Romance, and Musical audiences at that time into the films that eventually will be pigeonholed into the future Noir cycle. 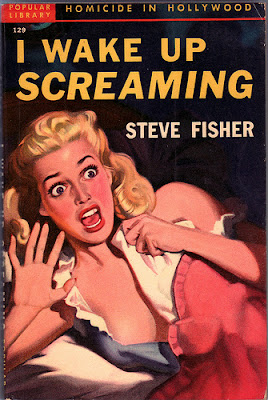 My assertion is that if you've screened I Wake Up Screaming after the various other Noirs it will seem a strange hybrid indeed, because of the conceptions you've already amassed. But, experiencing it as audiences did in 1941 it would probably seem fresh and innovative.

I Wake Up Screaming was Directed by H. Bruce Humberstone, though the original novel was based in Hollywood the studio switched the film to a New York based Noir, and though filmed on 20th Century Fox Studio sets the film is given a real feel of NYC you could possibly say "informed" by NYC born cinematographer Edward Cronjager. The second unit rear projection shots of Times Square blend smoothly and complete the illusion. The film stars  Betty Grable, Victor Mature, Carole Landis, Laird Cregar, Alan Mowbray, Allyn Joslyn, and Elisha Cook, Jr.

The credits flash against a Noir New York Skyline the titles are written in marquee lights and we hear a the musical equivalent of a shrill klaxon horn blasting out a danger warning. It segues into Street Scene one of the signature New York City themes. Street Scene was used by 20th Century Fox for the films Street Scene, Cry of the City, Kiss of Death, Where the Sidewalk Ends, The Dark Corner, and as the overture to How to Marry a Millionaire. The story even actually starts with a street scene a newsboy hawking the murder of a model. We then cut to a dark police interrogation room bright spot lights are sweating a suspect, classic Noir.  Professional promoter Frankie Christopher (Victor Mature) is being grilled, surrounded by shadowy figures barking questions. 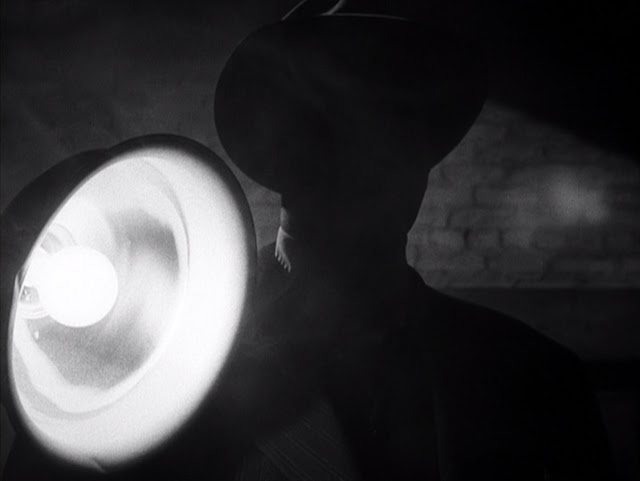 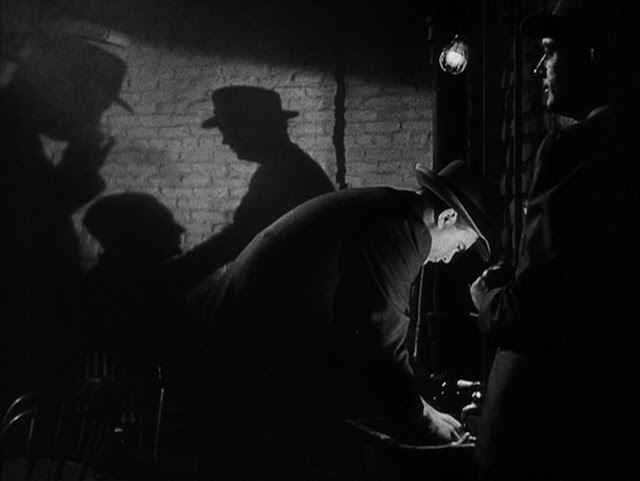 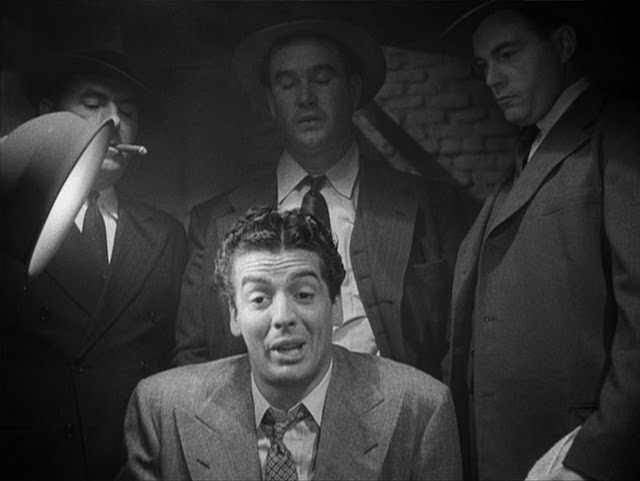 Frankie (Mature) above looking like Kramer (Michael Richards) from Seinfeld

Frankie then begins to relate the story, and in a flashback we are transported to a Times Square restaurant and we are brightly lit again and into screwball comedy mode. Frankie and his two pals, over the hill actor Robin Ray (Alan Mowbray) and gossip columnist Larry Evans (Allyn Joslyn) flirt with hash slinger Vicky Lynn (Carole Landis). In a nod to Pygmalion Frankie makes a bet that he can transform Vicky into a celebrity inside of six weeks. Cut again to a classy nightclub where Frankie introduces Vicky, now dressed in evening gown and sable, to cafe-society. Throughout the film the sequences that feature Vicky or are in some way connected to her also have the Street Scene theme in various arrangements jazz, muted trumpet, etc., it becomes her leitmotif, and suggests the Musical genre. In a later sequence in a police projection room we see Vicky singing on her screen test. 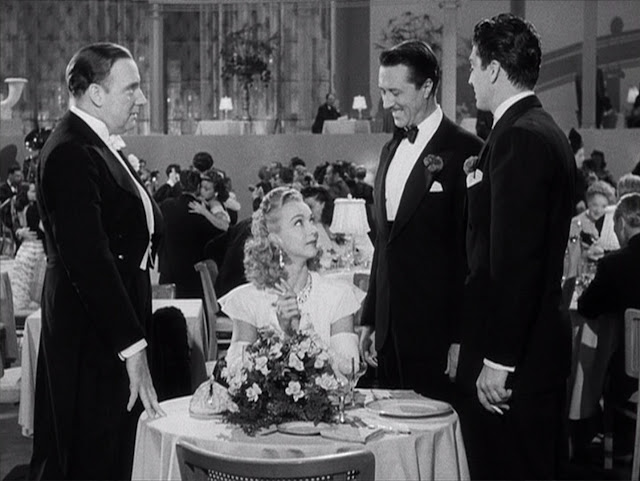 We cut back to the police station, back to the present, and back into Noirsville. We now see Jill Lynn (Betty Grable) being questioned in the dimly lit squad room. As Jill tells her story we again go into flashback. She tells us how Vicky came home that first night and told Jill that she was through slinging hash and that from now on she had other things to sling. She had offers for modeling, commercials etc., etc. Jill tells her it's just easy money "your picture is on a magazine one day and in the ash can the next." Vicky is unfazed she snaps back that she knows what she wants and how to get it.. 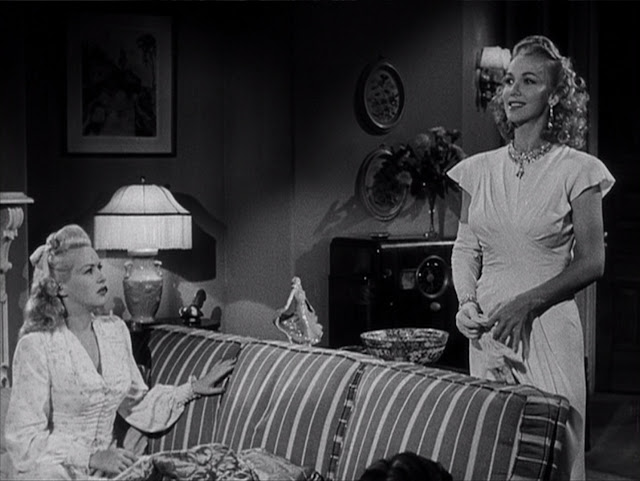 she knows what she wants and how to get it..

The weeks pass and Jill finds herself falling in love with Frankie. Every time Jill and Frankie are together Over the Rainbow plays in one form or another as their "love" leitmotif another nod to musicals. Street Scene is not only Vicky's leitmotif but also it represents the New York, anything goes, sophisticate. The juxtaposition between it and Over The Rainbow which also brings to mind innocence is interesting for this Noir.

During another session with the cops Jill remembers a stranger she saw staring at Vicky throught the window of the restaurant one night. It turns out to be Lt. Cornell (the name a nod to Cornell Woolrich) who is unhealthily obsessed with Vicky Lynn. Cornell also has a moody, sinister leitmotif.

Cornell is trying hard to pin the murder on Frankie, going as far as withholding and planting evidence. Elisha Cook Jr. is Harry Williams the nervous Nellie desk clerk at the residence hotel where Vicky and Jill have their appartment. 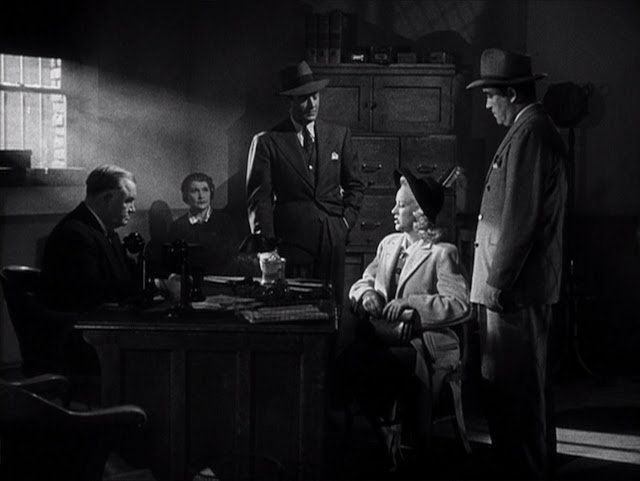 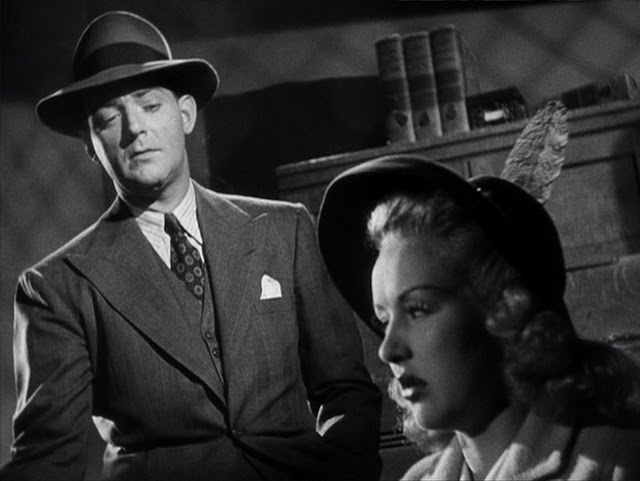 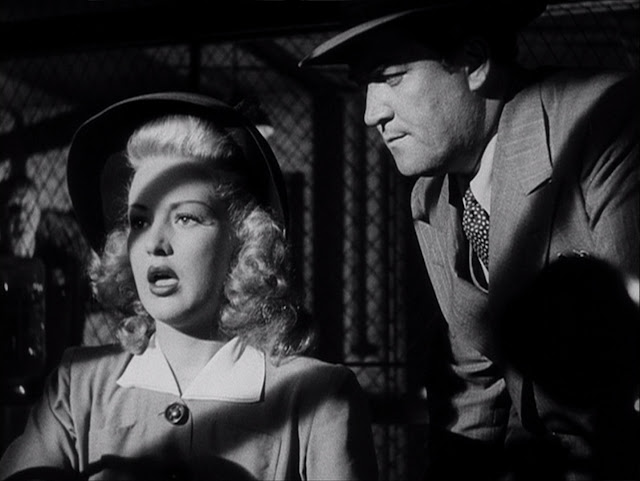 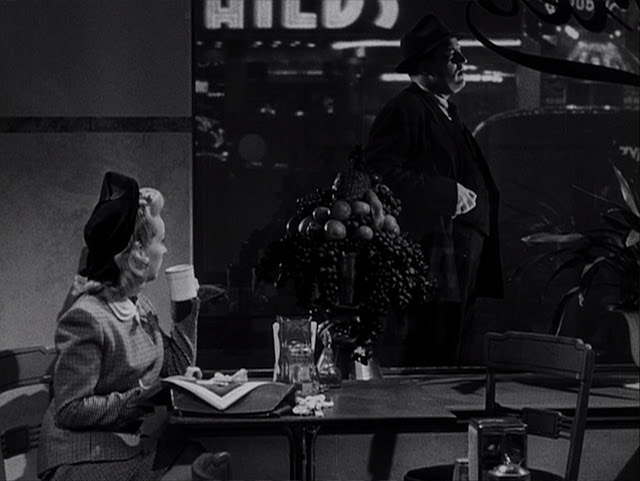 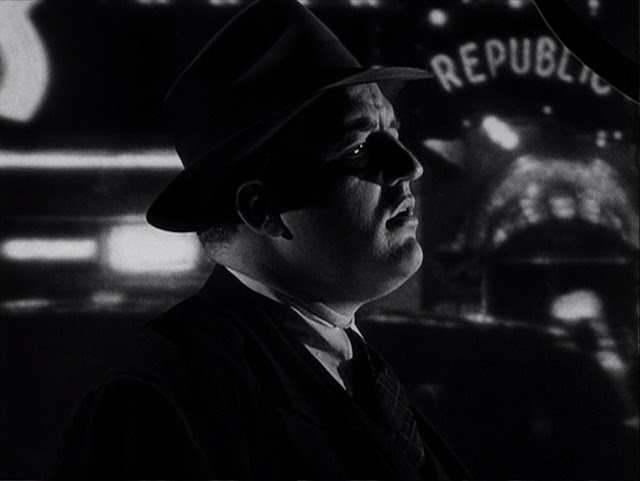 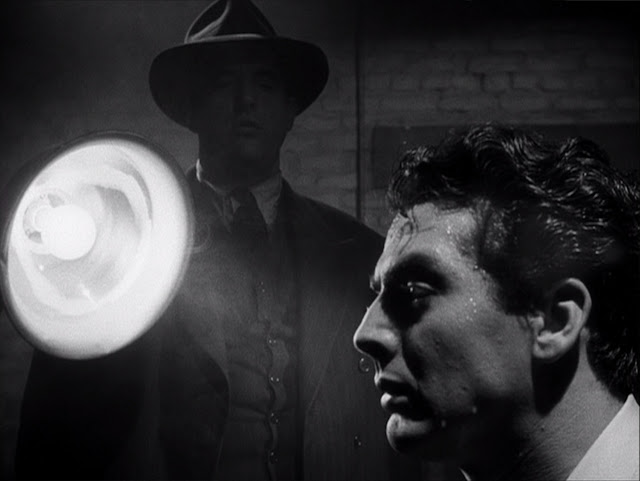 We get another Screwball Comedy sequence when Vicky tells her three "creators" that she's signed a long term contract for Hollywood and that she's leaving for the West Coast. We see Frankie, Robin, and Larry are seated on bar stools drowning their sorrows and taking pot shots at one another. 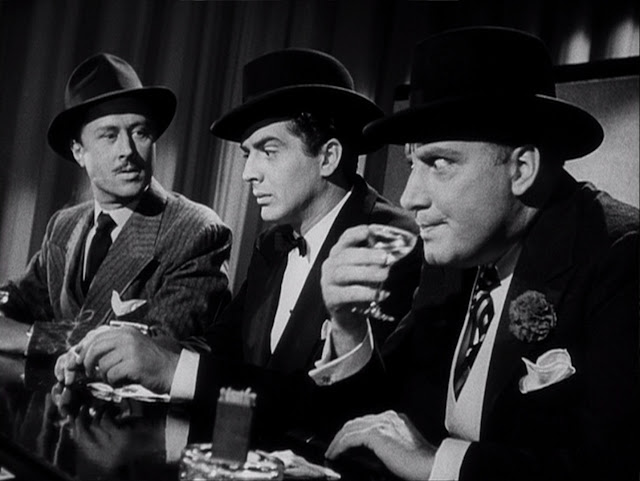 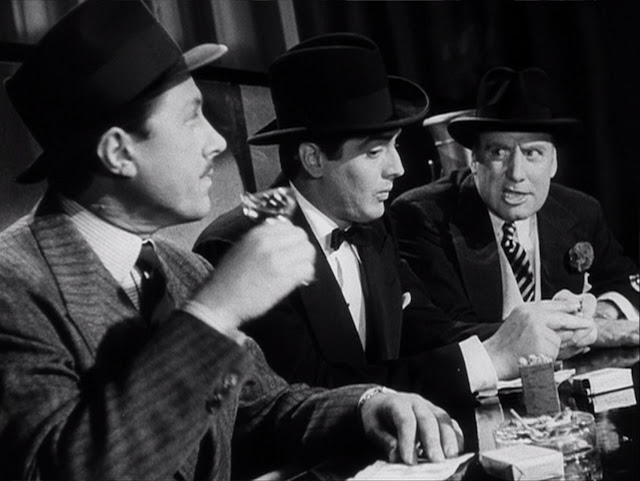 Robin snaps back, you ink stinker....

Frankie eluding the police shows Jill how to hide out at an all night Adult Theater it's a nice little sequence.  At one point a beat cop enters the theater, Jill has her shoes off and her legs up on the seat in front of her. Frankie sees the cop and begins to make out with her so that his face is not in showing. The cop goes down the aisle then  on his way back up uses his nightstick to tap her on the soles of her feet. He takes her for a hooker and tells her to "get your shoes on sister".

The cat and mouse game between Frankie and Cornell plays out to the end with some nice interesting twists. The screencaps are from the Fox Film Noir DVD. The film is like an early flyover Noirsville 9/10. 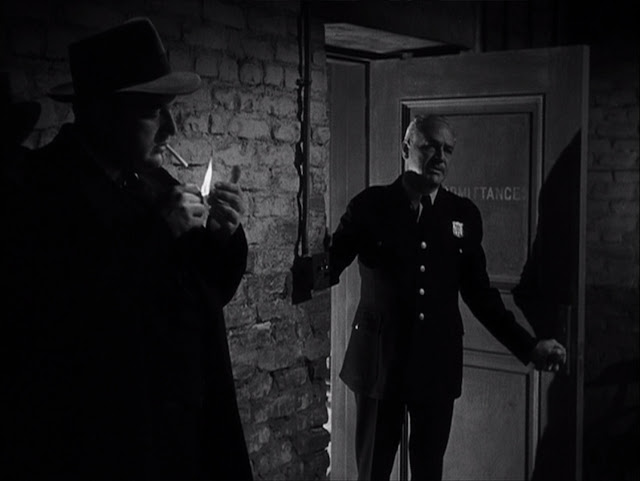 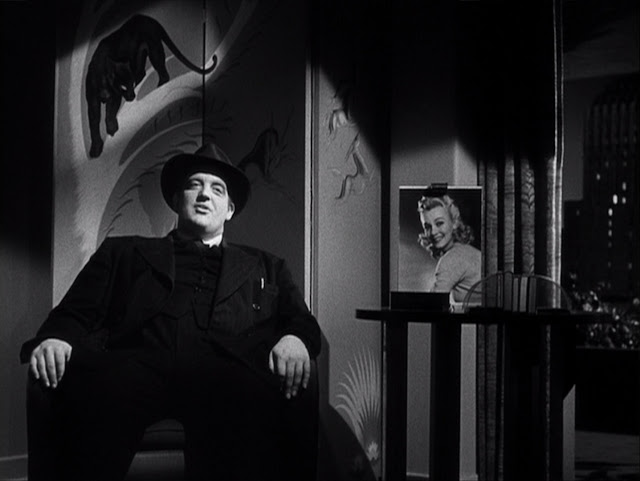 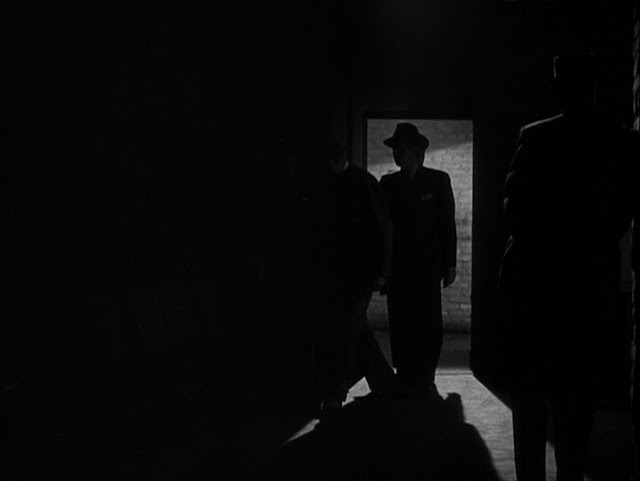 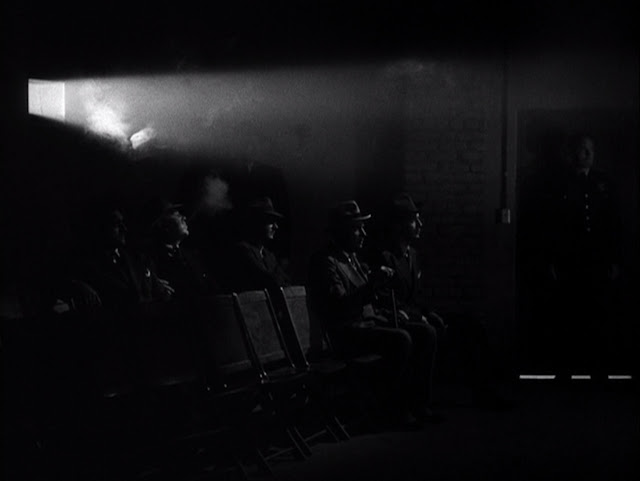 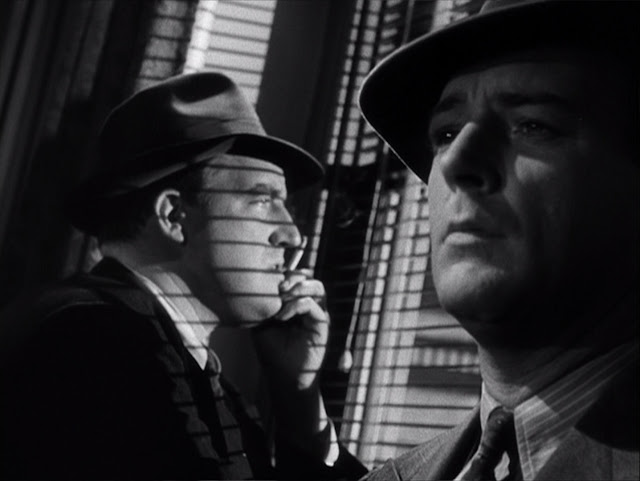 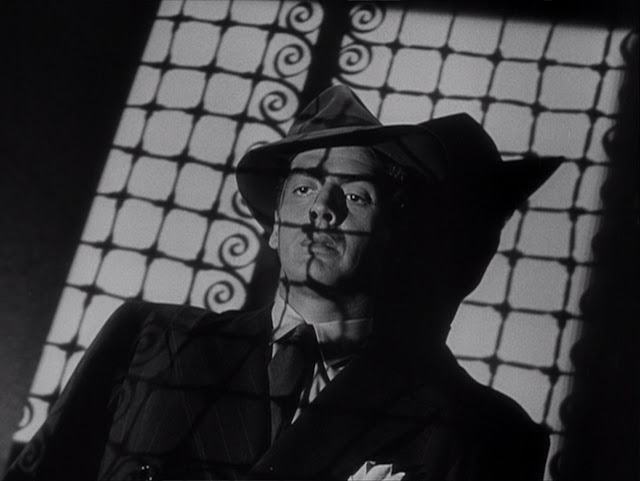 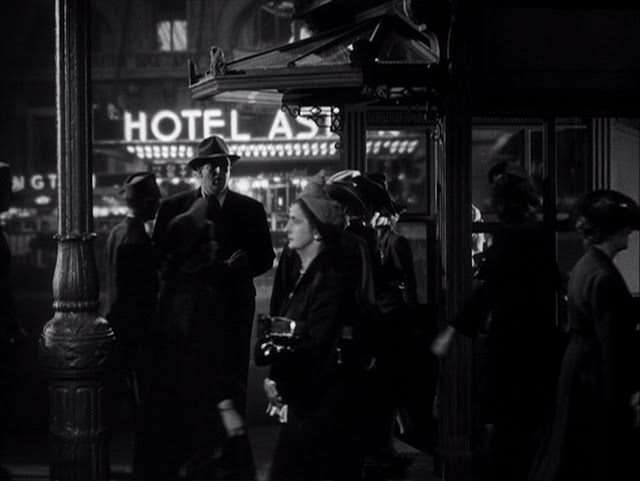 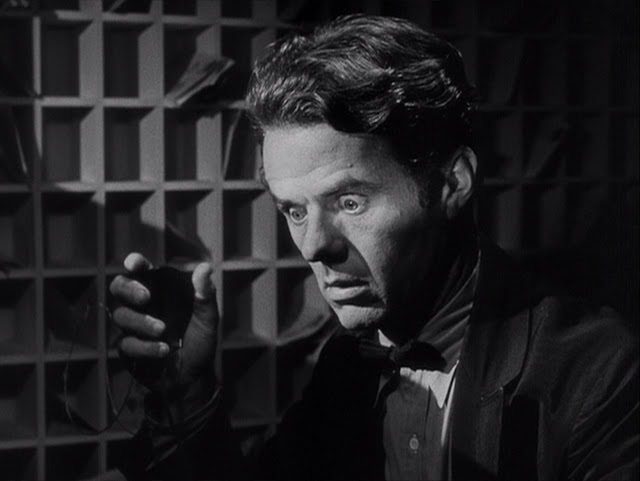