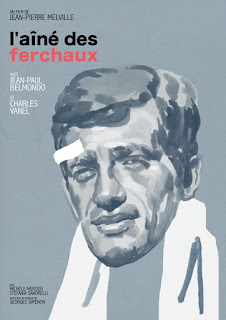 "There are three kinds of people, sheep, leopards, and jackles"(Dieudonné Ferchaux)

Written and Directed by Jean-Pierre Melville, and based on Georges Simenon's novel.

The Cinematography was by Henri Decaë and the Music was by Georges Delerue.

Melville's first American film Two Men in Manhattan, was a tight little mystery about a French UN delegate that unexpectedly disappeared and a French reporter and his photographer searching New York City for him. L'aîné des Ferchaux was Melville's second "Valentine" to America. This time a French "Road Movie." Just watching this for the first time today I was struck by its occasional wandering all over said road.

Its the story of an ex-paratrooper turned wanna be boxer Michel Maudet who in V.O. tells us that if he looses this fight, a National Welterweight bout, his manager will throw in the towel.

No use throwing good money after bad. He looses the bout on points. His manager tells him basically that he doesn't have it. The stuff, the moxie.

Broke, Michel looks in the classifieds for a job. Michel and his gal pal Lina have to sell their coats and other valuables for eating money.

They pack up the rest of their stuff and sneak out of their hotel. At an outdoor café Michel gives Lina the cash he makes a call and then tells Lina that he's got an interview for a job nearby. He'll be back, he tells her, soon.

Visually, Melville hits all the ionic noir elements. Michel Maudet, the down and out boxer. A boxing ring. A prize fight. A dingy locker room. A one star hotel flop. A French "el." Neon. They are filmed often in the Noir visual style. The interiors are in the neo noir equivalent of chiaroscuro, a grimy and often clashing pallet of puke yellows, intestine greens, bone whites, carnal reds, dead body blues.

Juxtaposed against the grunge is the upper class board room of the Faucheux Company. Its in chaos. The CEO Dieudonné Ferchaux has been hounded by a past accusation of murder in an African nation. That was the press. Now it's newly elected government of fly spec sub Saharan ex colony that is pressing France to have the company's assets frozen and him extradited for trial.

Dieudonné Ferchaux's side of the story was that he was leading a caravan trying that was trying to join up with his bother Émile's caravan two hundred and fifty miles away when his porters tried to rebel.  Ferchaux felt that his life was in danger from the three ringleaders, so he threw a lit stick of dynamite at them, ending the negotiations.

Ferchaux decides to flee the country immediately. Ferchaux will however need a secretary / bodyguard who is ready to travel, so he instructs his attorney to put an add in the classifieds that is answered by Maudet.

Faucheux is sort of the French equivalent of Louis Calhern's character Alonzo D. Emmerich in the Asphalt Jungle. Where Emmerich had one "niece" he kept in a fuck pad, the unmarried Ferchaux has two "goddaughters" he keeps around for some ménage à trois. How noir of him.

Ferchaux's townhouse is a more refined version the decadent Neo Noir color pallet. Basically a fresh corpse rather than a decaying one. But its the same carnal reds against intestine greens.

He interviews Michel, likes him,  asks him if he can travel immediately and hires him on the spot. Ferchaux tells Michel to give his man servant his drivers license so he'll get a visa for tomorrow, and to be back in a half hour ready to split.

Michel goes back to the café where Lina is waiting, sneaks past her, grabs his valise and ditches his gal pal. Nice guy, a least he gave her the money.

The plan is to hop a TWA flight tomorrow night to New York City, grab about 50 million dollars from a safety deposit box and if they can try and get more money out of an account. The account could be frozen by the time they reach it. Faucheux also shows Michel the key to another safety deposit box in Caracas. Faucheux tells Michel that they will only go there if it all goes to shit. Venezuela does not extradite wanted people.

The bankers from NY tell Faucheux that can't liquidate the bank account for two days, so they get all the money out of the safe deposit box buy a car to head South. They drive through the Lincoln Tunnel but make a detour into Hoboken, New Jersey.

Here is the first "tourist" detour that Melville takes. In V.O. Michel tells us they are making a homage to the birthplace of an Italian that he admired. Its the real boyhood home of Frank Sinatra.

Later on another road trip "touristy" sequence is along the Blue Ridge Highway and through the George Washington National Forest. We also get a comparison between southern white neighborhoods and poor black ones.

Back on the storyline Michel has a small dust-up with two army soldiers who turn off his Sinatra selection on a juke box in favor of Elvis, during a stop at a lunch counter. Faucheux is impressed by his (unproven) to boxing abilities.

Michel also spots a 1959 Chevy Impala tailing them. He tells Faucheux and they decide to stop at a motel for the night. When the Impala also pulls into the Motel, Michel goes to investigate.

He is confronted by two FBI agents who tell him that the US government is being sent extradition papers for just Faucheux and they tell Michel to make sure Faucheux does not leave the country. He is free to do what he wishes. Back their room Michel, bullshits Faucheux and tells him that the car belongs to two traveling salesmen. Michel and Faucheux make it after a few more hiccups along the way to a small town hideout in the in the Cajun country bayous just outside of New Orleans.

Melville and Henri Decaë lovingly film noir touchstones, the neighborhoods under the Paris elevated Metro line 6, Manhattan's Broadway and Times Square, rundown tenements (Hoboken), roadside gas stations, lunch counters, bars, motels, New Orleans and Bourbon Street, strip joints. The interiors were most probably Studios Jenner Paris as were the Bayou house and Jeff's Bar. Some of roadside scenery is a bit to arid looking for the Eastern USA,  those were shot in Massif de l'Esterel, Provence, France  filling in for the US.

The film is a curiosity, it's a bit uneven, not one of the greats, but very watchable with some what is now gorgeous archival footage of places probably long gone. Screencaps are from the Criterion Blu. 6.5-7/10.